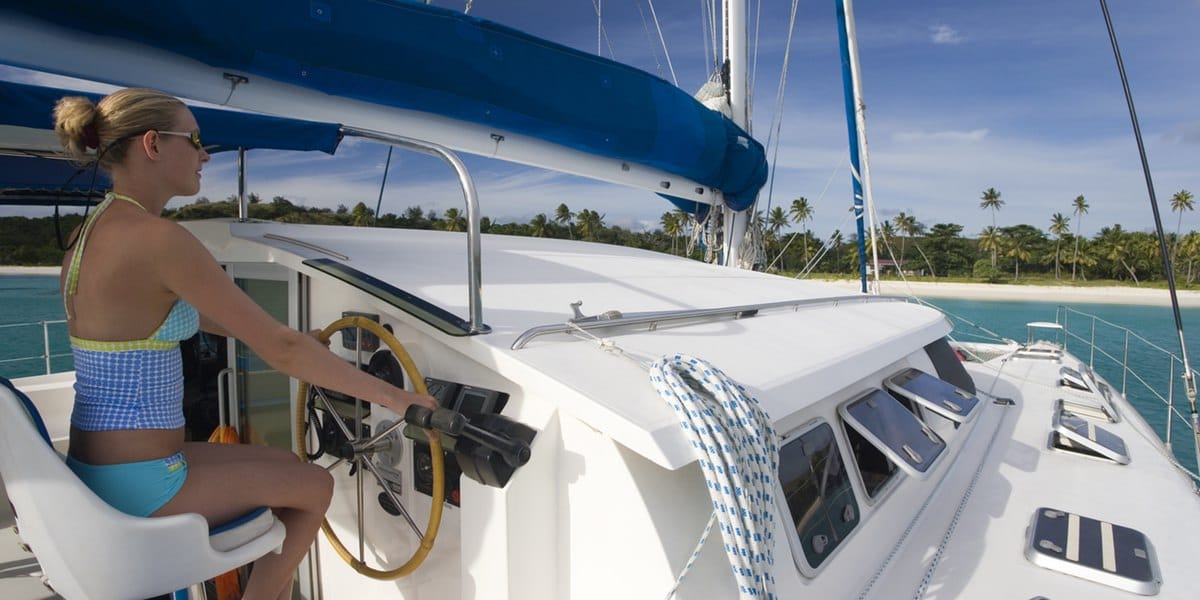 Teaching Couples How to Sail

Quite often, women call me to ask if I offer all-women’s sailing courses. The reason, usually, is that they are tired of trying to learn sailing from their husbands, or because they have been in courses where the men tended to take over. In the late 1990s, I interviewed Betsy Alison, five-time Rolex Yachtswoman of the Year, at the Bitter End Yacht Club in Virgin Gorda, BVI. Betsy is one of the best sailors in the world, but she says that even she gets into situations on racing yachts where men ask her to step aside when about to tack so that they can handle the jib sheets!

Generally, the different learning styles of each gender make men more eager to do the hands-on stuff while women tend to hang back and observe. Some sailing schools don’t let husbands and wives in the same course because each couple already has their communication dynamic set in place. Often, the husband absorbs the information and then relays it to his wife. While he is translating to his wife what I just said, I am already explaining the next step, and now they have both missed it, putting them behind the rest of the class. For couples like this, I tell the man that his help is needed at the bow of the boat so that his wife or girlfriend can hear what I’m saying with less distraction.

Once, I was teaching a female student in the Virgin Islands how to drive a dinghy. She was doing well, but returning to our boat, she saw her husband standing on deck watching us. She began to drive erratically, forgot how to use the throttle, and nearly hit our yacht! I asked her what happened. She said, “My husband was watching”. Independently, she had mechanical skills, but as part of a couple with him, she did not. Her husband handled the mechanical things in their home life, and this dynamic spilled over into their sailing lessons.

Another thing I have noticed is that when men and women take sailing courses together, men tend to try things before they have been given the full explanation on how to do it. Women, on the other hand, tend to want to find out all the details before they start something. The instructor has to balance the needs of women who want a complete explanation against the enthusiasm of the men who want to “just do it.” Sometimes, it seems that the fun is diminished for men if they know too many details about something before they start it. I have often waited for a man to tie a bowline when he really doesn’t know how to do it. But he will insist, “I can do it, just wait.” Perhaps he is also the kind of fellow who will drive around looking for an address rather than ask for directions.

During one of my women-only courses, we had an engine failure. The raw-water cooling system had shut down, so we anchored under sail and got a tow. Back at the dock, we discovered that our engine overheated because the raw water filter had not been screwed back on tightly enough after our pre-sail engine checks. This broke the seal so the engine couldn’t draw in enough cooling water. One of the women spoke up and said, “That was my fault. It was so difficult to get the filter unscrewed to clean it, that I screwed it back on loosely so it wouldn’t be so hard to open the next time.” I refer to that kind of mistake as a “gender error.” To make a gross generalization, I’d say that women tend to be information gatherers while men tend to be experience gatherers.

Title 9, the 1975 law that requires schools to offer equal physical education opportunities in sports for both boys and girls, made a huge impact on how women approach learning to sail. Women who were in high school after Title 9 went into effect show very little difference from men in their eagerness to take the helm and try new skills. But women who finished high school before 1975, generally, have a more reticent attitude about trying new things and tend to defer to men. Perhaps this observation will be useful in your teaching.

As a sailing couple, the best combination is to have two people with two different learning styles and two different operating styles. That way, when there is any kind of challenge, they can be analyzing it from two different perspectives and have two different options on how to handle it. On a boat two heads are better than one. If those two heads have respect for each other’s styles, they are more likely to tackle anything that comes their way.

This is a well-thought-out, well written and informative article and ‘rings many bells’ when I think back on my years as an ASA instructor. Well done!

Great article Joan. I concur with your observations and I want to share one of the techniques I use to manage the occasionally problematic dynamics between male/female partners. When the male/husband keeps ‘instructing’ during my class, I gently get their attention and point out that it is difficult for any of us to listen to 2 voices and discern which one should be listened to and that for the class, I would like the students to hear my voice. I’ve done this many times and always with a very appreciative tone for their interest in helping. It works every time… Read more »

Thanks Joan, great article and insight on dealing with couples, personalities and strengths and weaknesses. My wife and I enjoy sharing sailing as a life style aboard our 44-ft catamaran in the Caribbean. I’m the ASA instructor and she is the chef, so we have many shared responsibilities for our one week live aboard classes. Some the more difficult couples we have had to deal with are the seriously competitive ones. The “Anything you can do, I can do better ” attitude. Especially when the wife out scores her husband on a written exam, and just has to rub it… Read more »

Boy, I could write a book on this but I’ll try to be brief. The incident that most dramatized gender difference occurred on Lake Erie when I had six aboard a small keelboat and a line squall was about to hit, the kind that could put the spreaders in the water. One women had a very good feel for the helm for a beginner. I asked her to steer while I went forward to lower the jib before dropping the main. “Oh no, I wouldn’t feel comfortable.” Snake wake Jake immediately volunteered and Jane was about to relinquish the helm.… Read more »

This is such a great article, Joan. I love teaching couples and welcome the challenges of “division of labor” during the process of sailing. Most often, both partners are surprised by the other’s strengths and weaknesses. I often ask men to leave the instruction to me and stay with their own learning process. Thanks for your wisdom here.