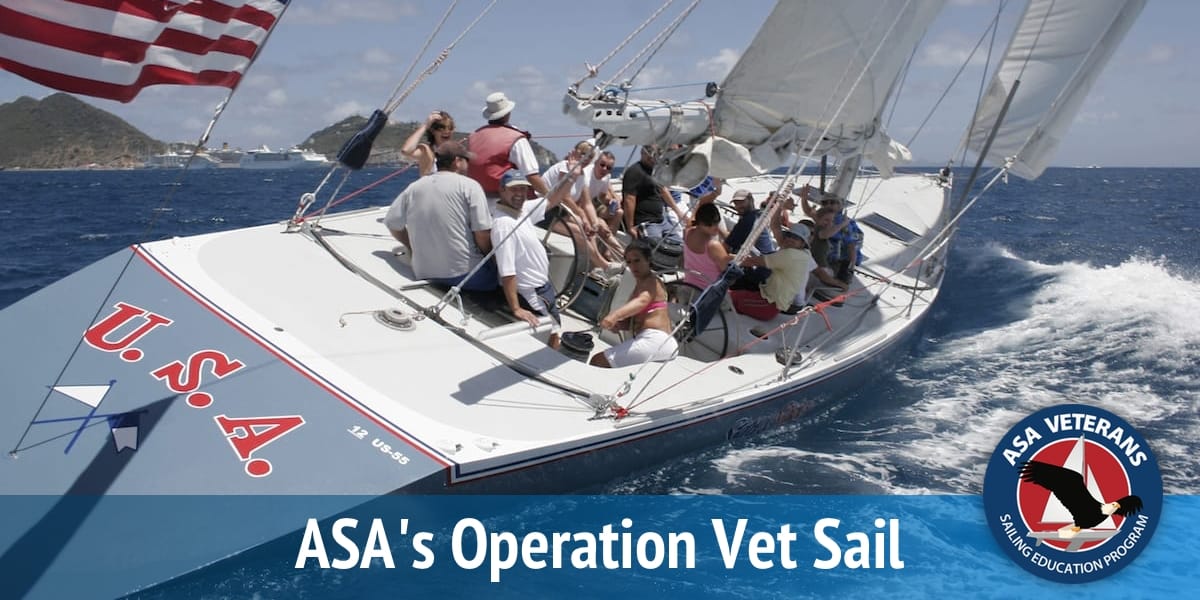 In November 2018, American Sailing launched its Veterans Sailing Education Program aimed at getting more veterans out on the water. America’s premier sail education authority is taking advantage of its unique position to express its gratitude to these brave individuals by offering ASA’s basic sailing course (ASA 101) at a special rate.

“We believe that sailing places people in the ‘here and now’ like few other activities can,” said Lenny Shabes, American Sailing’s Chairman of the Board. “Immersed in beautiful, natural scenery, sailing offers a healthy and peaceful environment in which to recharge and reduce stress – something we can all use, especially our military who have given so much while defending our daily freedom.”

Participating ASA schools offer a minimum of $50.00 or 10% off of their regular “Basic Keelboat Sailing” (ASA 101) tuition to U.S. veterans and active duty military. Many schools will offer greater savings and several have sailboats to accommodate disabled students who need a more stable or custom platform.

Since 2018, American Sailing has donated over $41,000 to the Veterans Sailing cause, and more than 120 schools have offered a discount to military members seeking a sailing education.

During ASA’s “Basic Keelboat Sailing” course, students begin their sailing journeys by learning the essential skills to take the helm or crew a sailboat. Taught by ASA-certified instructors, the multi-day class covers basic sailing terminology, sailboat parts and functions, basic sail trim, points of sail, seamanship, basic navigation rules and more. Upon completion of the course, students will receive their ASA 101 certification from the ASA and can safely continue to enjoy the sailing lifestyle with family and friends.

Active and retired military interested in this program can go to asa.com/veterans to find a participating school in their area. Alternatively, they can consider an ASA school in a vacation destination and contact the school for participation information and other details.

Take a look at the participating sailing schools and find one for you.

This is how a couple of our ASA Affiliated Schools are participating in the Veterans Education Program.

One school, in particular, Warrior Sailing, is anything but your average sailing education center. Warrior Sailing is an organization designed to bring the love of sailing and the benefits of being out on the water to Veterans who are ill, wounded or injured. Warrior Sailing provides a maritime education as well as brings back the camaraderie and teamwork aspects of the military to veterans working on their physical and mental health.

Through their basic sailing camps as well as their certification camps Warrior Sailing helps to provide physical, mental and emotional therapy for a variety of injuries and illnesses. Participation in these camps leads to the potential to earn ASA Basic Keelboat Certification and many participants participate in races among disabled and able bodied sailors.

Veterans Sailing Association has been quite prolific in certifying of veterans in ASA 101 Basic Keelboat Sailing. ASA featured their story in a recent article about A Navy Son and His Army Veteran Father. Veterans Sailing Association offers a bundle ASA 101, 103, 104 class free of charge to active duty and honorably discharged veteran military personnel, provided that they study and pass both written and open-water sailing tests.

Captain Joe Mastrangelo is the owner of Veteran Sailing Association and is a fromer Navy SEAL. He was hooked on sailing after a fellow SEAL had him over steaks and beers on his 65 foot ketch named Distant Drummer. The story is described in this passage from a feature on Capt. “CJ” on the ASA website.

My journey began prior to entering the Military @ 19 years of age – a friend and his wife were sailing their 45’ Ketch down to Roatan, Honduras and I couldn’t resist. We ended up sailing for a month from Key Largo down to the Exumas before health issues forced him to delay. 20 years later a fellow SEAL invited me over for beers and a steak cookout on his “yachet”. I said “yachet” what the hell is a “yachet”….???
Well upon arriving I saw a corvette, Harley and this enormous 65’ sailboat. It was Ted Irwin’s personal 65’ ketch now named Distant Drummer. He was on the bow greeting me and held his hand to his ear……do you hear it??? Again, perplexed I just pondered…..he said that is the Distant Drummer calling you. Well after a steak cookout on the aft deck along with several beers (with a few of the single female sailors making a pass to see the new greenhorn) I was hooked. Thus the journey began and I hunted for a ship of my own – eventually a 1976 41’ Morgan Out Island Sloop named Anjin San chose me…….

While he had sailed before he went to the military it was this experience as well as a sailing expedition with ASA sailing instructor Capt. Jennifer Maclean that set him off on his own course. While currently serving as a sailing instructor in the Florida Keys Captain Joe also holds a PADI Master Instructor’s license. You can find Captain Joe Mastrangelo at Veteran Sailing Association in Tavernier, Florida. Take a look at them on Facebook or on the ASA website.

Participating American Sailing schools are offering a minimum of $50.00 or 10% off the list price of their ASA 101 Basic Keelboat Sailing course. Many schools have even more generous offerings for veterans, active military, and reservists, so be sure to check details with the individual school.

I would like to get involved with Veteran Sailing program! I have been ASA certified up through 105 for a couple years now! I am also a veteran of 23 years in Navy! I live in Michigan and would love to assist where I can.