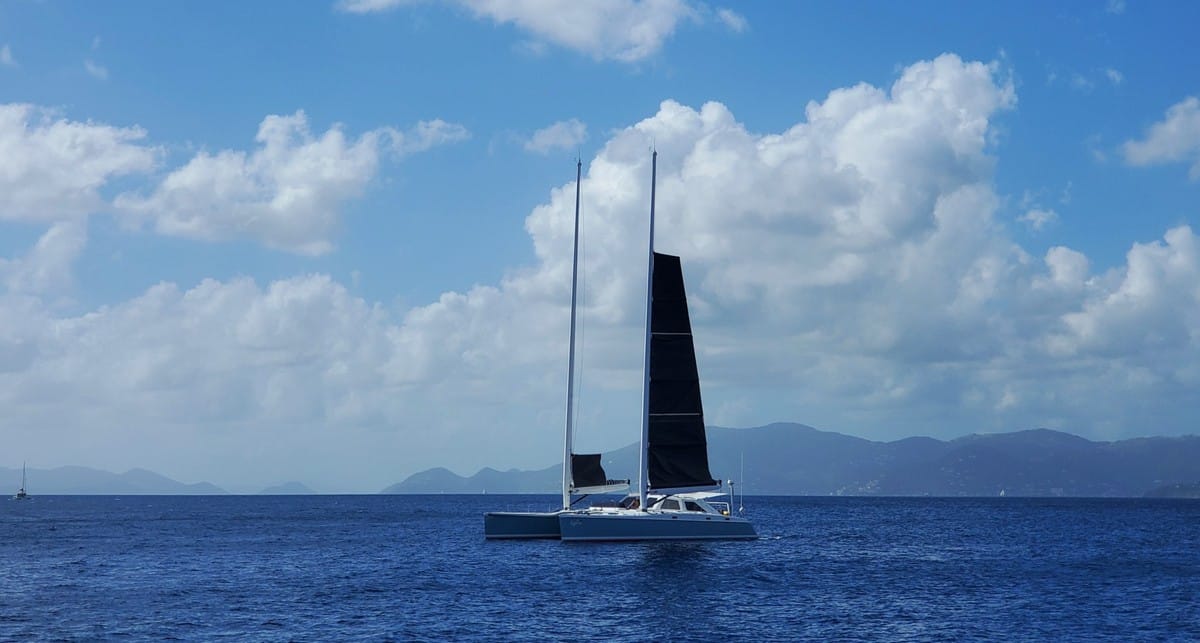 While sailing in the Sir Francis Drake Channel in the British Virgin Islands I noticed a peculiar catamaran heading in our direction. A two-masted catamaran. Have you seen a boat like this? Does it have a name?

This guide to sailboats should help you identify the types of sailboats you might encounter while on your cruising adventures.

You’ll be able to find even more info on these different type of sailboats in our series “What’s in a Rig.”

What type of a boat is this…?

A sloop rig is a boat with a single mast and a fore and aft sail configuration. Sloops date back to the early 17th century but didn’t really become popular until the 20th century. The likely reason for their popularity is their ability to efficiently head upwind and how relatively simple they are to control – great for short-handing.

A variation on the Sloop is the Cutter Rig. Although it has gone through some changes through the course of history, the modern cutter rig is generally a set-up with two headsails. The forward sail is called the Yankee, and the one slightly behind it is the staysail.

There are many who feel that this very old but very innovative sail plan is superior to the more popular and ubiquitous sloop rig and others. The junk is predicated upon fully battened sails, a characteristic associated with more modern racing vessels, and they typically lack any standing rigging (stays and shrouds). Due to the full batten set-up, the sails maintain an efficient, consistent shape and are fast, especially downwind. In a big breeze, junk owners will attest that they’re extremely easy to reef and, as an added bonus, are inherently self-tacking.

They are two masted rigs with a main mast and a (smaller) mizzenmast that is set in front of the rudder post – they carry a jib just like a sloop. Generally, ketches will be in the 40-plus foot range. The reasoning for this is that before sailing hardware was as advanced as it is now, designers were looking for ways to carry a good amount of sail but make it manageable at the same time. This configuration served that purpose and, while doing so, also gave sailors quite a few options for various weather conditions and situations.

Like, the ketch, a yawl is equipped with two masts, a main and a mizzen, but ordinarily, on a yawl, the mast is smaller and set behind the rudder post. While some yawl sailors contest the small sail configuration that hangs over the stern as an aid to heaving to and steadying life at a mooring, most concede the mizzen on a yawl is not what it is on a ketch. Typically, it doesn’t provide any horsepower to speak of or ease-of-handling benefits in splitting the rig like a ketch or schooner might.

A gaff rig employs a spar on the top of the sail, and typically other sails can be set in conjunction with that mainsail with the gaff. Often, on the smaller, non-tall ship, gaff rigs, there will be a small triangular sail that fits between the main and the mast like a puzzle piece – this is the topsail.

A cat rig is a single mast situated well forward, near the bow, which carries a large single sail and has no standing rigging, sometimes referred to as “unstayed.” An Optimist, Laser or Sabot are common (smaller) examples of a cat rig, but many bigger boats utilize the set-up.

A schooner is a sailboat with at least two masts, with the forward mast (foremast) being a bit shorter than the main mast. Although a schooner can have more than two masts, most were just two. During the time of their popularity, this smaller and better upwind setup allowed for a more efficient and manageable sailboat. It was the preferred choice of pirates, privateers, slaveship captains and others.

So what type of boat is this? Let us know. Find us on Social media and share your thoughts @AmericanSailing

Schooner, I agree with Rich!
But the picture of a “Ketch”, is really a cutter rigged ketch. A simple ketch doesn’t have two headsails

Some guy in California has a catamaran like this for sale: https://www.sailboatlistings.com/view/87846

The Correct Answer Is: Your photo is of a bilateral (or parallel) gaff-rigged, top-sail-less catamaran. It’s kind of like a WWI biplane lying on its side in the water, with the bilateral wings sticking straight up. Instead of a double head-sail sloop or cutter, it’s a double-mainsail rig! The closer the parallel sails are (to a point) to each other, they can create a lot of lift, in part by creating a “Venturi Effect”. And, by the way, your photo of a “cutter” is not really a true cutter; instead, the photo is of a double-headsail sloop. A true cutter… Read more »

from the angle, i’d call that a square headed bi plane cat.

It falls under the general cat definition, and those appear to be freestanding masts,
Probably stolen from a freedom 44 schooner.

This is a cat boat with a junk rig

I would consider it the catamaran version of a catboat. Call it a cat-cat.

It’s a catamaran :-). I don’t recall any variations in naming akin to your monohull examples. A cat is a cat.

I think Schionning had an early design like that. It’s an interesting concept and I wonder if it reduces the tendency to tip. Still, the Cosmos is his greatest design…. if I could only afford one.

Two sloops with a mobile home welded between them

Could be a Sponberg or Kurt Hughes design.

IT IS A SCHOONER WITH MASTS WHICH ARE THE SAME HEIGHT.

Obviously a schooner because the first mast is shorter that the after mast. So which carries the mainsail?

cat with two wings or a double winged cat

This mystery rig is our catamaran called Saphira. We call the rig a bi-plane — it has two unstayed masts, one in each hull, fully rotating, boom-furling and reefing. The boat has only 2 square-top mainsails, no headsails or spinnakers. The idea is to simplify the handling so two people can cruise on it. She’s VERY fast!!