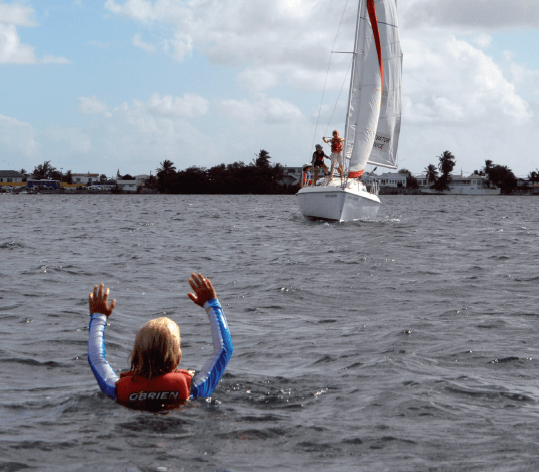 Every man or woman overboard situation should be treated as a very serious matter, even in seemingly balmy conditions. In cold waters or cold weather, in restricted visibility or at nighttime, or in rough seas, the chances for a positive outcome diminish. Any delay in recovering the person in the water stacks the odds against his chances of survival. the best advice is to do all you can to prevent anyone from ever going overboard, but be prepared to handle the situation if it does occur.

If somebody does go overboard, the entire crew must focus on one goal: getting him back in the boat. To do that, you have to do four things as fast as possible but without causing further risk to the boat and the rest of the crew.

Sailors have developed several techniques for returning to a man overboard (MOB) and in any situation, the exact one chosen will depend on the experience and skill of the crew, the number of crew on board, the type of boat, weather conditions, and perhaps other factors. In the end, all recovery techniques are more similar than different, as they all share the four key components mentioned above.

After that, everyone’s attention (apart from the spotter, whose job it is to keep the MOB in sight) turns to the goal of getting the boat to the MOB, attaching the MOB to the boat, and bringing the MOB back aboard.

Watching and pointing to the MOB is crucial because as soon as the boat turns to begin the recovery maneuver, the crew, busy at their stations, will lose their orientation with respect to objects outside the boat.

You begin this maneuver by sailing away from the MOB. This may feel wrong, but the crew needs time to prepare the boat and recovery equipment and distance to be able to approach at the right point of sail, slowly, in control, and equipped to retrieve the MOB. While one crew prepares the line with the bowline, another can put in place some means of recovering the MOB, such as a boarding ladder.

Placing the boat just to windward of the MOB is considered the safest approach in most conditions. It will offer him some shelter from the wind and waves and make it easier to throw him a line. If you have overshot, luff the sails and the boat will blow downwind toward the MOB. Be especially careful, though, that you don’t allow the boat to be blown on top of the MOB.

Additional MOB recovery methods are covered in Sailing Made Easy: The Official Manual For The Basic Keelboat Sailing Course.  These tips are directly from the text of the ASA 101 course.

Despite the variety of techniques for the middle stage as the boat turns back for the pick up, any MOB drill aboard a sailboat begins and ends with exactly the same steps. The methods share more similarities than differences. You will learn more options as you progress with your sailing instruction, and they are discussed in Coastal Cruising Made Easy. But reading instructions for dealing with an emergency will only get you so far. Practice, with the entire crew, is crucial. Remember, the sooner you get back to your MOB, at a very slow speed and with the crew prepared for the retrieval, the better.