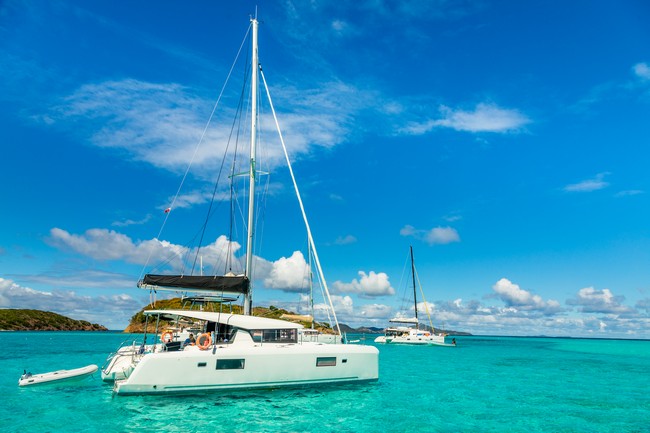 The British Virgin Islands may get more attention from boaters, but the U.S. Virgin Islands are an excellent sailing destination themselves — even if you never cross over to the BVI side. The proximity of St. Thomas and St. John make for a great itinerary if you’re just doing a day sail, while the passage to the third and more distant of the USVIs, St. Croix, offers the opportunity for some fun open-ocean sailing with a charming and historic island awaiting your arrival after a half-day journey.

St. Thomas is unquestionably the sailing capital of the USVI as well as one of the top yachting destinations in the entire Caribbean. With 46 megayacht-ready berths, Yacht Haven Grande in Charlotte Amalie is a beacon for boaters with its extensive dining, entertainment, provisioning and service options, and also serves as the base for the Moorings charter-yacht operations in the USVI.

It’s a moderate walk or a short cab ride into town from the marina, and Charlotte Amalie has a lot to offer St. Thomas visitors, including duty-free shopping along narrow colonial streets and alleys, the history of the 99 Steps, Fort Christian, and Bluebeard’s Castle, and the thrill of taking a cable car to the top of Paradise Point for tasty frozen mudslides and amazing views.

Both the north and south coasts of St. Thomas have destinations for boating, swimming, diving, and exploring. Lovango Cay, a small island located off the northeast coast of St. Thomas, was always a popular snorkeling spot for USVI boaters, and it’s even more appealing now that the Lovongo Resort & Beach Club is open. The private island resort manages a mooring field and also welcomes boaters to visit the resort’s beach club for dining, drinks, or shopping.

Turtle Cove off of St. Thomas’ Buck Island, a U.S. National Wildlife Refuge, is renowned for its local population of green sea turtles and attracts both bareboat yachts and daytripping dive charters, while Christmas Cove off Great St. James Island on St. Thomas’ east end is a popular overnight anchorage. If you don’t feel like going ashore in nearby Red Hook for dinner, the Pizza Pi VI pizza delivery boat will be happy to bring food to you. Four marinas, including Compass Point Marina make nearby Banner Bay another option for moorings, provisioning, and other boater services.

Magens Bay consistently ranks on lists of top beaches in the Caribbean, and a St, Thomas north shore sail brings you to the anchorage on the southeast end of the bay, which is close to the dingy landing if you want to hit the beach (or bar) while visiting. On the far west tip of St. Thomas you’ll find the Mermaid’s Chair, a double-sided beach —Caribbean on one side, Atlantic on the other — that’s an off-the-beaten path destination for snorkeling and sunning. Arriving by boat is certainly superior to the 3.6-mile hike in and out.

Cruz Bay is the locus for St. John’s relatively shopping, dining, and nightlife scene, and it’s a short dingy ride from the mooring field at Honeymoon Beach which — like all of the moorings within Virgin Islands National Park — are free for day use but first-come, first-served (overnight stays cost $26 per night). There are no marinas on St. John, but the ones on the east end of St. Thomas are just a short sail away.

Unfortunately, the hurricane-damaged Caneel Bay resort remains closed, but boaters can still find a mooring in the bay or in nearby Trunk Bay and Cinnamon Bay. Trunk Bay is known for its underwater snorkeling trail, maintained by the U.S. National Park Service; Cinnamon Bay also has clear water for snorkeling plus concessions where you get breakfast, lunch or dinner and can rent snorkel equipment, paddle boards, kayaks, and beach chairs. You’re also likely to meet some of the wild donkeys that wander the park here, and if you want to spend a night on dry land there’s a campground with tent sites and cottages steps from the shore.

The Leinster Bay anchorage is close to Annaberg Plantation, accessible via a short hiking trail; the ruins of this 18th-century sugar plantation are well-preserved and are explained by interpretive plaques and signs placed by the National Park Service. Watermelon Cay, located in Leinster Bay and surrounded by a small fringing reef, is the top snorkeling destination in St. John. On the island’s southeast coast you’ll find Coral Bay, a popular lunch stop owing to the free moorings in Hurricane Hole and dining options that include the popular Skinny Legs bar and Lime Out VI, a floating bar and taco stand.

Located about 38 nautical miles from St. Thomas and St. John, St. Croix is the largest of the U.S. Virgin Islands and a destination unto itself for sailors. There are 50 or so free, day-use moorings scattered around the island (with a three-hour use limit) plus more pay-for-use balls for overnight stays; some are located within waters controlled by two U.S. National Parks on the island: Buck Island Reef and the Salt River Bay National Historical Park and Ecological Preserve, the latter of which has a bioluminescent bay and is a reputed landing site of Christopher Columbus.

The island has four marinas, and there are mooring fields offshore of St. Croix’s sister cities of Christiansted and Fredericksted. Christiansted is especially well-protected and has both beaches and dining, shopping, and nightlife within easy reach.

Unspoiled Buck Island, with its picture-perfect beach, hiking, crystal waters and reef trail, is the most popular day-tripping excursion for St., Croix visitors, who can explore the island via charter boats or by private yacht. An anchorage off the west end of the island is available for day use or overnight stays, although the island itself is off limits between sunset and sunrise. On the main island of St. Croix, Cheney Bay is an anchorage with direct access to Green Cay Marina and the Tamarind Reef Resort, a nice beach, and good snorkeling. You can’t anchor or moor at Cane Bay, but it’s well worth the cab ride from Christiansted to experience diving off the Cane Bay Wall, which drops 13,200 feet into the abyss of the Puerto Rico Trench just 100 yards offshore.

Sailing Schools in the US Virgin Islands