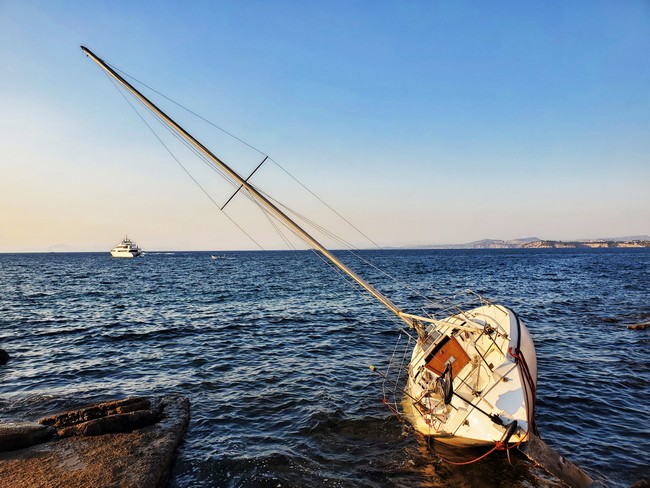 Is sailing a foreign language to you? Sailors have a set of terms that help communicate instructions to crew and generally describe the operation of the vessel. However, some terms are not always as mainstream for the average sailor.  These are a few of the terms that you may not be familiar with.

In fact, you may never use these terms on a boat but you’ll appreciate that you know them.

Abaft – Toward the stern, as in “abaft the beam”

Athwartships – Across the boat from side to side

Cringle -An eye formed by sewing a rope or metal ring into, e.g., a sail

Fake, Flake – To lay out a line in parallel lengths so it can run freely. To lay in even loose folds, as a sail.

Stuffing It or Splash Down – Basically when the boat drops off the foils and the hulls hit the water, usually in a very dramatic fashion that soaks the sailors.

Bitter End – The end of the rope you are working with.

Turtling – When a boat capsizes completely. When a boat “turtles” the boat is 100% upside down with the mast pointing straight down to the sea floor.

Black-flagged – The disqualification of a boat. (Racing Term)

Hunting – When two boats are converging, but instead of holding course, the starboard tack boat changes course directly towards the port tack boat forcing them to take action to avoid a collision. This aggressive tactic is predominantly a match-racing strategy.

Kellhauling – As a form of punishment, to be dragged through the water under the keel either at the beam or from bow to stern. A severe naval punishment during the 15th and 16th centuries. The victim, presumably a delinquent sailor, was dragged from one side of the boat to the other, under the bottom of the boat (keel). Tossed over one side and pulled up on the other, he was usually allowed to catch his breath before suddenly being tossed overboard again. Keel hauling lost favor at the beginning of the 18th century, to be replaced by the cat-o-nine-tails. The term still means a rough reprimand.

Poop Deck – A deck at the rear of the vessel.

Baggywrinkle – A Baggywrinkle consists of a woven “sinnet” which is wrapped in a tight spiral to form a cylinder-shaped “bristle brush” in the rigging. On traditional sailing vessels, it’s common to have multiple sets of baggywrinkles all throughout the standing and running rigging… anywhere that a sail might otherwise rub against wire, seizings, blocks, ratlines, etc.

Escutcheon – The plate on the stern of a ship inscribed with the ship’s name.

Choc-a-Block –    When a line, pulled through a series of blocks used to raise sails or part of a pulley system called block and tackle, has been pulled as far as it can go, it is said to be chock-a-block.  This system is used to achieve mechanical advantage.

Doldrums – The “doldrums” is a popular nautical term that refers to the belt around the Earth near the equator where sailing ships sometimes get stuck on windless waters.

Aloof – From the Old Dutch word loef which meant “windward” and was used to describe a ship within a fleet which sailed higher to the wind and was thus drawn apart from the rest of the fleet.

Gripe – A sailing vessel gripes when, by poor design or imbalance of sail, it tends to end up with its bow into the wind when sailing close-hauled.

Groggy – Diluted rum was labeld grog. A sailor who drank too much grog was thought be groggy.

Overbearing – To sail downwind directly at another ship thus “stealing” or diverting the wind from his sails.