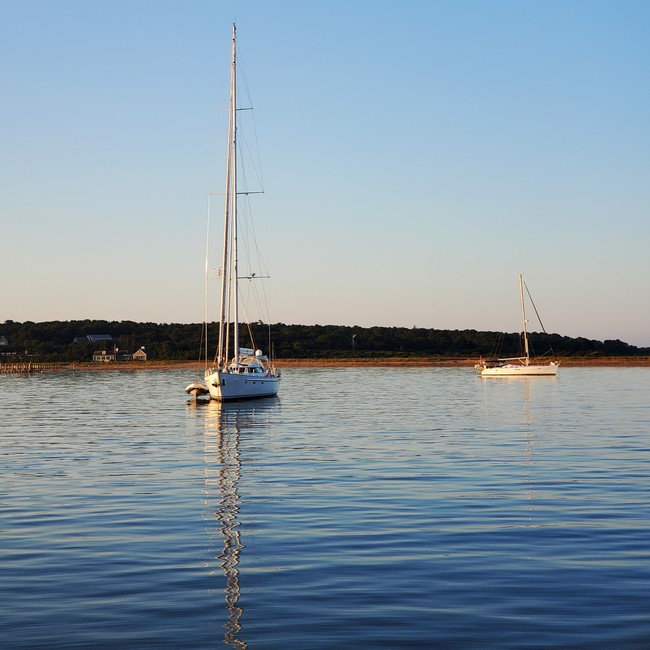 Quite a long time ago…decades ago. I sailed over to Catalina Island from my marina near ASA headquarters. I was young. It was my first time embarking across the channel. My crew was a good friend and his cousin who was celebrating his 21st birthday. They drank beers the entire time.

In simple terms, I was a solo sailor.  I was also young and irresponsible.  Why admit to this? Well, we all were young once and we all made dumb decisions. Own it and learn from it.

Did I understand anchoring? No. Up to that point, I had only ever picked up a mooring ball once in my sailing life.  This was way before Youtube videos explained how to drop the hook.

Frankly, ASA bite-sized lesson on Anchoring Basics would have been perfect for me.

ASA 101 Basic Keelboat sailing will prepare you for Basic Anchoring principles. However, let’s refresh some of that knowledge on how to drop and set an anchor on a sailboat.

Anchors work by digging themselves into the seabed. To do this, they need the rode to pull at an angle closer to horizontal than to vertical.

As you drop the anchor you will need to pay out a significant amount of rode to allow for the rode to pull at an angle that is close to vertical.  This is called the scope.  Typically, a 7 to 1 ratio works.  This number will get adjusted depending on conditions. (A lesson learned in ASA 103, ASA 104)

TIP: “When in doubt let in out” works well in anchoring.

Stand well clear of the anchor rode when letting go of the anchor—anchors are heavy, fall quickly through the water, and the rode can cause, at the least, a nasty rope burn

A few years ago Sail-World.com published a great article on Anchor Etiquette and it is still very relevant.

1. The first boat sets the precedent:

If you arrive in an anchorage and find that all the boats have a stern anchor set, that’s now the rule. If the first one there is a cabin cruiser that yaws all over the place and they have 60 metres of rode out in five feet of water, they have set the precedent. Any subsequent comers will need to give them room.

Entering an anchorage or a mooring area is like moving into a new neighborhood. Enter at a slow speed, less than five knots, to avoid making a wake that might upset their sundowner drinks or the bits from the winch they were servicing, or dinner preparations. This also applies to dinghies when traveling close to anchored boats – and in most countries, it’s the law anyway.

3. Give yourself, and other boats room:

Look at the wind in the anchorage and try to work out where the anchors of other boats are lying. Cruise through the anchorage a couple of times to assess the situation. Calling out to find out how much chain the boat has out is an indicator that you are aware of swing patterns and will attempt to place your boat so that it is not in the way of another boat. There’s also some self-preservation here too, as you may want to stay clear of potential party boats, or the boat with that very noisy wind generator. Remember, if he was here first, you are the one who has to move.

A boat already anchored seems to attract the next boat to anchor right next to it, even though there is an enormous empty bay to anchor in. Try not to do this, and, if you were there first, it is your right to speak to a boat that arrives after you and ask them to move if you feel that they are too close.

In a crowded anchorage, it’s a good idea to buoy your anchor – place a floating marker on your anchor so that you, and others, know where it is. There’s nothing worse than tangled anchors, particularly if you have to make a hasty departure because of deteriorating conditions. (Of course, you have to keep a small watch to make sure your first-time sailor doesn’t arrive and try to pick it up as a mooring ball.)

Voices, music, engine noise, especially outboard motors, unmuffled go-fast boats, ski boats, jet skis, generators, barking dogs and the dreaded ringing telephone are all examples of the egregious disruption of anchorage serenity. Common sense should prevail in predicting what will not be appreciated and protecting the serenity for the common good.

It’s not the anchoring, or the need to re-anchor, which separates the beginners from the experts. It is the amount of yelling and chaos that breaks out between the person handling the anchor and the person maneuvering the boat. Boating is the only sport that requires T-shirts that proclaim ‘Don’t yell at me!’ Either develop a set of hand signals or better still, use some inexpensive walkie-talkies, so that at least your comments on the abilities of your other crew member will be kept on your boat.

8. Think of your neighbors AND the environment:

The smell of burgers on the grill might be a marvelous aroma for most, but really smelly cooking upwind of a boatload of vegetarians may be a cause for some strong sentiments. Don’t go into a crowded anchorage full of pristine water and then not use the holding tank! – It’s really not a good scene for swimmers in the water. And it can ruin your whole day to find yourself swimming with rotten tomatoes or floating banana skins.

9. Be careful with lights at night:

When anchored at night always have an anchor light on (black ball during the day), when looking for an anchorage don’t shine a strong beam directly into another boat’s cockpit, and don’t be the boat that’s lit up like a football field deep into the night when all else in the anchorage are trying to sleep.