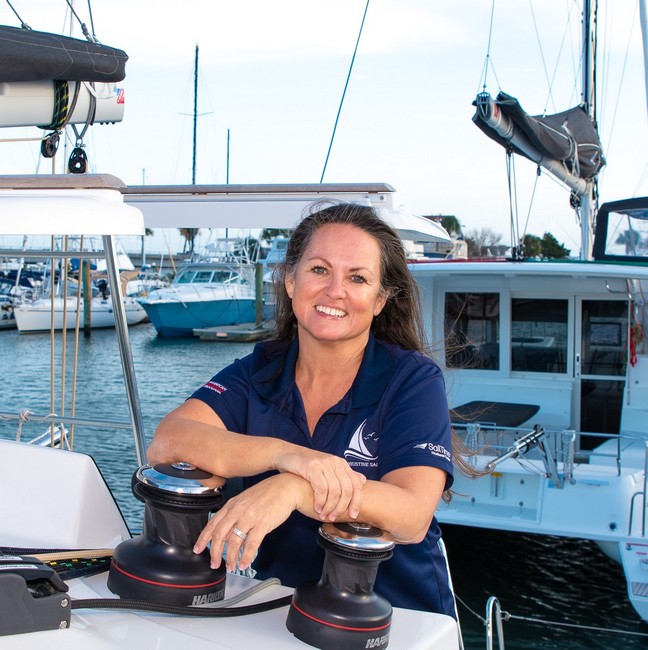 As the owner of St. Augustine Sailing, Captain Rose Ann Points manages the company’s various member clubs, the local SailTime franchise, American Sailing Association School, and the new and used boat sales brokerage. Rose Ann founded a variety of team-building programs and sailing activities. She established Women on the Water (WOW) to enhance the lives of women through education, practical application and access to sailing vessels, and to develop skills to sail with confidence. 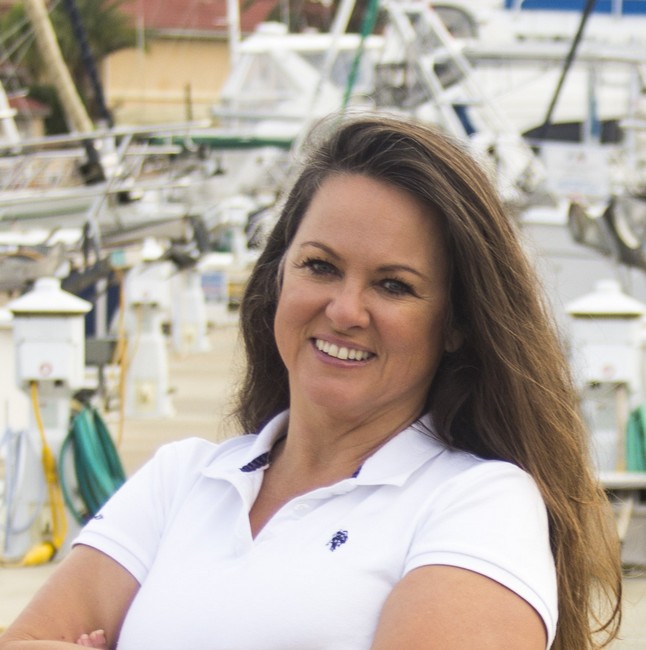 I grew up in a very small Oregon town and always wanted to travel to faraway places to explore and seek new adventures. The list of places was endless. That feeling never went away. As I grew up and life took hold, things just moved on. One gets married and has children, leaving dreams behind.

Then one day, my husband at the time, told me he wanted to sell the house and everything we own to buy a sailboat and travel the world. I was not yet thirty and had three small children. The idea of packing up our home in Washington State and moving aboard a boat was not my idea of jet-setting luxury. I knew nothing about sailing and I could not swim.

After much deliberation, I decided the children and I would join my husband on this grand adventure. We contacted a yacht broker in Florida and a real estate agent to list our property in Washington.  Our home sold in just seven days.

Reality kicked in when my husband brought home four moving boxes. He handed me one box for each of the kids and one for me. They were small boxes – maybe 2 feet by 2 feet.  He told me whatever we wanted to take with us had to fit in that box.  At the time… I didn’t think this would be such a happy memory, but it did and I think about it often. As I gave these boxes to my children, I explained, to the best of my ability, what we were going to do and that they would be able to bring whatever they cherished most with them – so they had to think really hard and pick only the most important items.

It was amazing to see what each of my children selected.  I watched them put an item in box and then take the same item out just to replace it with another more cherished one. My youngest son, Lance, had the greatest rock collection and it turned out to be his most treasured possession.  Lance put in his box a Tonka truck, his rocks, and one pair of underwear.  I asked him if he did not think he needed more than one pair of underwear.  His response makes me laugh to this day. Lance answered, “Mom, I will have two:  the one I am wearing and the one in the box.” After much debate, we were able to get a few more outfits into his box.

My daughter, Toste, had a larger mix of items. As the eldest, she had a better understanding of what was happening. However, as was the case with me, she did not know what life would be like on a sailboat.  We had a 27-foot Bayliner on which we would go fishing, vacation, and spend long weekends on.  Staying on a 27-foot boat was difficult because there were five of us, but it did have a head and a galley. Toste and my mother, Doralee, would make porcelain dolls together.  Parting with these precious treasures was a very difficult experience.  She did not want to leave them behind.

Derk, my eldest son, loved books and had every book in the Dr. Seuss collection.  We sorted through his collection and kept some of his favorites. Those books included titles such as Green Eggs and Ham, The Cat in the Hat, and One Fish Two Fish Red Fish Blue Fish.  We narrowed his books down from sixty to twenty.

Before leaving on our new adventure, we visited my parents, John and Doralee.  Saying goodbye to my parents was the hardest thing I had done in my life. My mother and I promised the children she would take care of the most precious items they were leaving behind.  My mother had a rose garden and she had worked hard on getting all the rocks out.  She took Lance out to her garden and told him that she wanted to put his most precious possessions with hers.  Together they examined each rock and found the perfect spot for each of them. She placed Derk’s books on the living room bookshelf for other grandchildren to read and enjoy.  Toste’s dolls were given top priority being displayed in my mom’s curio cabinets alongside her dolls so Toste would know they would be loved and looked after.

The day finally arrived, we packed up, and started our grand adventure across the United States from Washington State to Florida. We still did not have a vessel or even a place to stay. The final destination was Fort Lauderdale to see our yacht broker, Wytt.  After a few months of searching, we finally selected “Tranquility” a 1977 Morgan 41 Out Island Ketch.  We did not know how to sail so my husband hired a local captain to teach him while they repositioned the vessel from West Palm Beach to the Florida Keys.  We had visited several locations throughout Florida while we were searching for the right vessel, and decided that Marathon was the place to stay, for a few months, to learn before heading off to unknown shores.

The children and I went to Marathon and waited for “Tranquility’s” arrival. The trip was only supposed to be a few days down the coastline, under the 7-mile bridge and around to the small quaint harbor where we were staying.  We were all excited to see “Tranquility” approaching and pulling into its slip.  The next day we started moving aboard and everyone had to make adjustments.  Yes, we brought too much stuff!

Over the next few months, we took short trips to the Everglades, Key West, and anchored in the Gulf of Mexico We then took a longer trip to Fort Jefferson at the Tortugas to get familiar with the vessel and learn what we could. We eventually headed out across the Gulfstream to the Bahamas!

The most memorable class for me was my first ASA 105 Coastal Navigation with 4 students. Students, at this level, have already built or developed a passion for sailing and acquired a significant amount of knowledge.   I was very anxious about my own teaching abilities in a class with individuals who had already been sailing for a while.  I was apprehensive about the manner in which I would convey instructions, and was uncertain if I could provide the correct answers to their question. What would I do if I did not know the answers? Would I be able to explain accurately and in a logical manner the information?

The whirlwind of emotions led me to prepare for any scenario. I spent hours preparing for things that ended up being briefly discussed. Other things, I had not anticipated became subjects of intense discussion.  This required me to present the information in a variety of learning styles for all to understand. Those instances of intense discussion became opportunities for me to build my own self-confidence as an instructor.

This was my most memorable class because it required me to step outside my comfort zone.  Although I was the instructor, I feel I walked away with an important lesson.  You must believe in yourself!

Today, the St Augustine Sailing team has trained/certified over a 1,000 sailing students.

Outside of St Augustine, FL it really depends on the situation and what you want to do.  These are my favorites:

Sailing can be fun at all skill levels.  Be safe, be aware of your surroundings, and continue moving forward. Rome wasn’t built in one day.

Sailing allows me to escape from the world’s pressures, allows me the time to get re-energized, and allows me to connect with our creator through his beautiful masterpiece without any interruptions or distractions.  I feel most at peace on the water with a light breeze on my face, sun basking against my skin, meditating on all the precious gifts of life.

ASA: How do you attract more women to sailing

My first priority is to lead by example. I want to be approachable so women can share their insecurities in a safe non-judgmental environment. When I talk to other women, I share my accomplishments, but also my struggles, insecurities and what I did to overcome them. Since so many women can be intimidated by sailing, I try to relate to them on a personal level and help them identify sailing goals in a step-by-step manner.

Our Women on the Water (WOW) program is designed to provide a pathway for women to reach their goals through positive and mutual support. Our Mission Statement is: “To enhance the lives of women through education, practical application, and access to sailing vessels to develop skills to sail with confidence.

Captain Rose Ann Points can be found at St. Augustine Sailing in Florida

I love this. Maybe one day I can come and take your class.