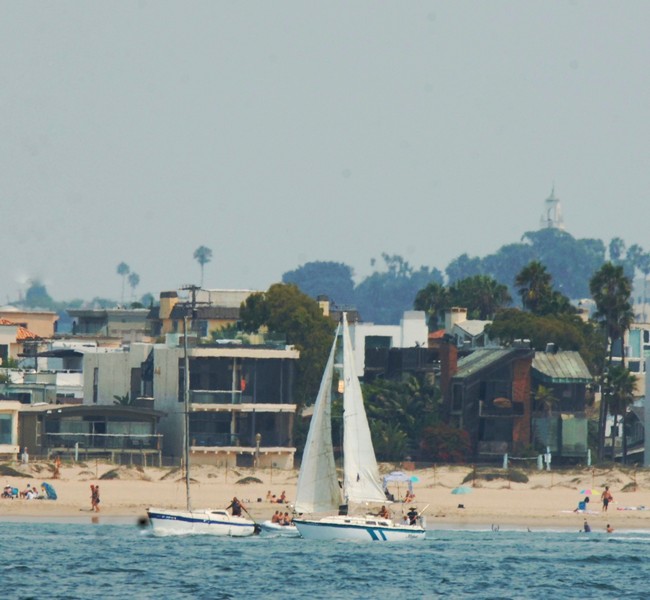 Understanding a lee shore, the possible consequences, and how to avoid them is a necessity for anyone, anywhere, who is behind the helm of a boat. It’s an important and yet often overlooked concept. In fact, as I started compiling my resources for research on this article, I was stunned that several well-known authoritative works on seamanship and sailing failed to include any information or even definition of a lee shore. The ASA covers the concept briefly in Coastal Cruising Made Easy, which is the text for ASA 103. In the sea of new information that you learn in a sailing course, it’s easy to forget about some concepts – don’t forget about this one. In this article, we will define a lee shore, discuss how to avoid one, and what to do if you find yourself against one.

These days, most of my sailing is in and around San Diego Harbor, which has a number of lee shores that change depending on the direction of the wind. The harbor is narrow – at its widest point at Harbor Island, it’s only about a half-mile across. In fact, I’ve come to believe that it’s easier to get into trouble in an area that feels safe, because it lulls you into a false sense of security. I’ve seen it play out time and time again when boats end up on the breakwaters, or worse. A few years ago, several boats dismasted on the aircraft carrier Midway – you guessed it – often a lee shore:

Merriam-Webster defines a lee shore as, “a shore lying off a ship’s leeward side and constituting a severe danger in a storm.” That’s a pretty good definition, except problems associated with a lee shore are not confined to storms. Simply put, it’s the shore – any shore or fixed object – that is downwind from your vessel. Ok, you may say, it’s a body of land downwind from my vessel, so what? The “so what”, is that it’s the direction you are being pushed (leeway), and if you’re not careful, you can end up on rocks, shore, or even an aircraft carrier! Annapolis Book of Seamanship states that leeway can range from “2° for highly efficient racing boats sailing in smooth water, to 20° for cruising sailboats in a gale.” Leeway, or side slip if you prefer, is a result of the effects of wind and current pushing on the vessel. Since current and wind both change, so does the effect on your sailboat; the skipper needs to monitor conditions and the relevance to any lee shore. In San Diego Harbor, when the wind shifts from the south, the breakwaters on Harbor and Shelter Islands become lee shores. When its prevailing sea breezes from the northwest are blowing, the lee shores change.

Now that we understand what a lee shore is, and why it matters, let’s consider how we avoid one. Let’s introduce one more term first: sea room. Sea room simply means having enough room to maneuver the vessel, and adequate sea room is the first step to avoiding a lee shore. Many sailors (especially novices) feel safer if they are close to shore, and they trade adequate sea room and distance from a lee shore to feel safe. In reality, there are generally fewer hazards a few miles offshore, and most experienced sailors will want to be clear of in-shore traffic, lobster traps, kelp beds, and other near-shore types of hazards. The next logical question is, “how much sea room is enough?” Unfortunately, there is not a single correct answer. The distance changes based on multiple factors such as vessel design, crew skill level, wind, current, and weather. Light breezes can make it harder to get off a lee shore; strong winds can make it harder to get off a lee shore. What? Didn’t I just contradict myself? The light breezes could be overrun by strong currents and leave you without enough “power” to move the vessel away from the shore. The strong breezes, combined with unfavorable current and wave fetch make it difficult to work upwind. I like to allow for more distance than I think I need, and that distance increases as conditions get rougher. This allows me time and distance to react to the situation, work away from the lee shore, or respond to any situations that occur. Give yourself space. In a narrow bay, like San Diego, I’m not saying you need to be on the other side (the upwind side) of the bay, but you also don’t need to be twenty yards off the breakwater. Use common sense, and give yourself room to respond to problems or changes; the key is to think ahead.

The actual distance needed in a hypothetical situation is not nearly as important as learning how to recognize a lee shore when you are sailing. The next time you are on the water, consider the direction of the wind in relation to the land, consider the effect of tide or current, look around and identify the lee shore(s), and don’t get too close. The principle to master here is situational awareness.

If you find yourself nearing a lee shore, and having difficulty gaining sea room, here are a few points to keep in mind:

Sailing is a skill that utilizes a huge body of knowledge; by reading this article, you’ve added another tool to your toolbox. Keep learning and expanding your knowledge and skill, while most importantly, having fun safely on the water.

Cam Seamus developed a love of boats and the sea at an early age, growing up in Dana Point, California. After working as a corporate executive, he went on to become a licensed captain and ASA sailing instructor who worked for several years in the yachting industry. His work as a sailboat captain contributed to his memoir, Two Years Behind the Helm, and his first novel, The Captain: Point Loma. Cam has sailed all over the world and crossed oceans, but he is always happy to return home to the San Diego area. He is a proud veteran of the United States Marine Corps.

This is a perfect explanation!

Thank you for the article. Concise, easy to understand and just the right length for this topic. 🙂

Am I confused? Isn’t a leeward wind one coming from shore and a windward one blowing towards shore?

Nice article. People also note that you can drop the anchor if you are drifting towards lee shore (I have not tried it in an emergency situation but it sounds reasonable).