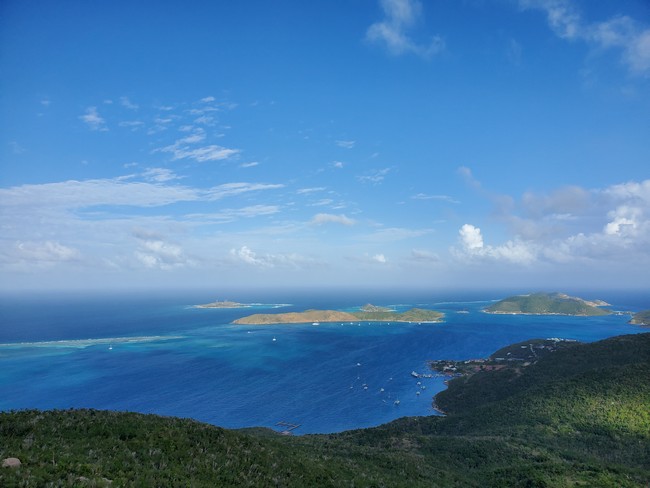 When Hurricane Irma scored a direct hit on the British Virgin Islands in September 2017, it’s no exaggeration to say that the results were apocalyptic. Making landfall as a Category 5 hurricane, the eye of the storm passed directly over the islands of Tortola, Virgin Gorda, and Jost Van Dyke. When the skies finally cleared, every piece of tropical greenery had been stripped from the landscape, more than 4,000 houses were damaged or destroyed, hundreds of boats had been sunk, and landmarks like the Bitter End Yacht Club were literally wiped off the map. Some of what survived Irma was finished off two weeks later, when another Category 5 storm, Hurricane Maria, hit the BVI.

Nearly five years later, the scars of the storms are visible in places like Sea Cow Bay on Tortola, a “hurricane hole” that failed to protect – the sunken boats still visible in shallows and along the shoreline. Elsewhere marinas have been cleaned out and reopened, charter yachts are once again sailing to the beach bars of Jost Van Dyke, and famous North Sound sailing destinations like the Bitter End and Saba Rock have been rebuilt — arguably better than ever.

Shuttered for more than four years after the storms, the Bitter End Yacht Club officially announced its return in late 2021. The 27-slip, 72-mooring marina actually reopened in December 2020, but now is complemented by a full range of services, including a marina village with dining at the Buoy Room restaurant, pizza and coffee at Cafe Salacia, the Quarterdeck marina clubhouse with its private deck overlooking the docks, and the Reef Sampler bar — built from the raised hull of a 34-foot Downeaster that previously served as the resort’s flagship.

The Sunchaser Scuba dive shop also survived the hurricanes, and has been joined by the Bitter End’s new watersports center; the village also features a retail shop and provisioning market, with plans on the boards to bring back the Clubhouse restaurant, which nourished visiting boaters from 1969 to 2017.

By far the most eye-catching part of the rebuilt, however, is a series of waterfront bungalows, with a design inspired by traditional sail lofts and featuring two levels of open-air living space facing North Sound. Two of 11 planned Marina Lofts are now open, with plans to build an additional 40 hillside bungalows.

The remnants of the old Bitter End haven’t completely vanished: storm debris was used as landfill to raise the entire resort property several feet above sea level, salvaged timbers were used in the boardwalks connecting village buildings, and a bronze statue of a young sailor, pulled from the bubble and now adorning the Quarterdeck Marina bar.

Just a quick skiff ride away, the Saba Rock resort — a one-acre private island in the channel between Virgin Gorda and Prickly Pear Island. Like the Bitter End, this popular yachters destination was obliterated in the 2017 storms. But the owners were determined to rebuild a resort that could withstand a future hurricane, encasing the core of the resort and restaurant in reinforced concrete walls and anchoring sturdy roofs with thick steel cables and turnbuckles.

The new Saba Rock may be built like a fortress, but it doesn’t look like one: the restaurant and bar are spread across two levels open to the sea, facing west and popular for sundowners (skiffs can tie up alongside a waterfront boardwalk, steps from the restaurant and retail shop). Seven luxurious, guest rooms, perfect for mariners seeking a comfortable night ashore, are arranged in a semicircle and feature whimsical nautical decor (semaphore flags in our room spelled out “Saba Rock”) — a nod to the resort’s largely sailing clientele, who dock at the resorts seven slips or snag one of the 18 balls in the mooring field.

Located on the easternmost end of Virgin Gorda, Oil Nut Bay is an exclusive residential resort with one- to six-room villas, rental suites, and a variety of pools, restaurants, and amenities for use of guests only. However, this North Sound resort also includes a marina with 93 berths for vessels up to 130 feet in length, along with a mooring field with 10 balls for boats up to 60 feet and one mooring ball for boats up to 120 feet, first-come, first-served.

Separate from the rest of the resort, and opened in 2019, the Oil Nut Bay marina includes fashionable boutique shops, a market, a coffee shop, a water sports center, and the Nova restaurant, where visiting sailors can recline on a comfy sundeck lounger or order sushi, seafood, steaks, and craft cocktails for lunch, dinner, and Sunday brunch.