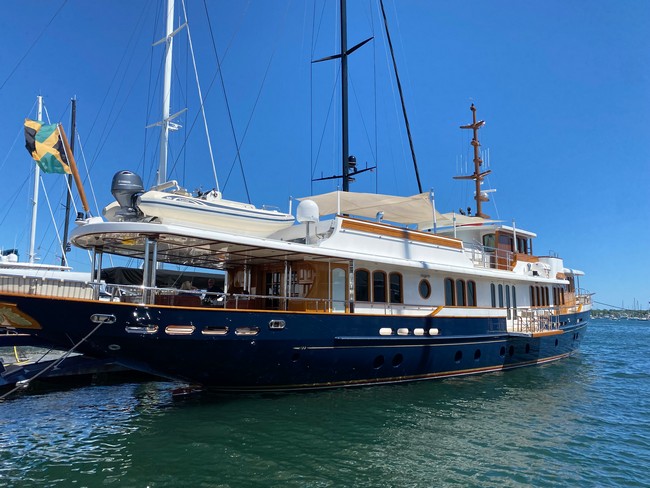 The beauty, glory and occasional danger of sailing were all on display the third week of June in Newport, R.I., as the city hosted both the Newport Charter Yacht Show and the Newport Bermuda Race.

A total of 18 charter yachts took part in the June 20-23 show, including monohull sailing yachts Wild Horses, Rebecca of Yineyardhaven, Aresthusa, and Augusta Maverick, and the sailing catamaran Gaia. Yachts ranged in length from 60 feet (Aresthusa) to the 164-foot power yacht TCB.

The show centered around the Safe Harbor Newport Shipyard, which provided dockage for participating yachts as well as playing home to about a dozen vendors (led by Helly Hanson, which created a popup shop for the event) and a hospitality tent doubling as an event center for awards night and other group activities.

Captains and crew were kept busy showing off the yachts throughout the course of the four-day event, with the biggest crowds on the days when the chef’s competition and a Goslings Rum sponsored cocktail competition took place.

“We had 300-plus people in attendance throughout the show and we hosted a variety of events to celebrate the charter yacht industry and to make it fun for the captains and crew who work tirelessly to make their yachts charter-ready,” said Veronica Brown, director of experiences for Safe Harbor Marina. “The quality of yachts on display was excellent, and the charter broker participation was on par with previous years.”

The city of Newport played a starring role, as well, with brokers invited to take private tours of the Rosecliff mansion and the new Sailing Museum, which opened in 2022. The traditional evening Yacht Hop was themed “The Gilded Age” in recognition of Newport’s prominence in the popular HBO series, which is filmed in part in the city.

“Newport is a good host for the show because it is one of New England’s main yachting hubs,” said Brown. “Charter yachts often depart and return to Newport at the charterer’s request because Newport has so many great amenities including a nearby small airport that accommodates private jets; plenty of berths for yachts of all sizes, including sailboats with deep drafts; it is centrally located between New York and Boston; and has plenty of accommodations and local attractions (restaurants, boutiques, museums, etc.) for people to visit while in town.”

Even late arrivers to the show were given a hospitable welcome by yacht crew, who set out hors d’oeuvres, poured cocktails, and offered tours — some led by the captains themselves. Captain Bill Wassmer, whose background includes sailing with Ted Turner, proudly showed off the four-cabin motor yacht Lexington, for example, and chef Renata Riley, a former restaurant owner in Kentucky, served her entry into the cocktail contest: a Goslings rum punch with mango, pineapple, papaya, orange, and San Pelligrino.

Aboard the elegant 151-foot “gentleman’s yacht” Nadan, Capt. Mike shared stories about an owner who keeps a pair of cannon mounted starboard and fires them in welcome whenever the boat returns to its home in Maine.

The Charter Yacht Show overlapped the 2022 Newport Bermuda Race, held June 17-22 and featuring 19 classes of racers and hundreds of boats. “We always host the Newport Charter Yacht Show right after the start of the Newport to Bermuda Race,” Brown said. “For Safe Harbor Newport Shipyard, the timing is right because many berths open up after the race start, making it possible to move the racing yachts out and the charter yachts in.”

Participants came from all over the world to race in the 52nd biennial sprint from Newport to Bermuda, dubbed the “thrash to the Onion Patch.” The race typically takes 2-6 days, and the “thrash” in the nickname is a nod to the often treacherous North Atlantic weather facing sailors during the race.

That danger was underscored in the 2022 race by the tragic crew-overboard death of Colin Golder, captain of the 42-foot sloop Morgan of Marietta, who died while the boat was battling strong winds about 325 miles out from Bermuda.

Morgan of Marietta was one of 16 boats forced to retire from the race, but hundreds of others finished, and some set new records. The MOD70 trimaran Argo set an elapsed-time record time of 33 hours, the fastest time recorded in the 116-year history of the Bermuda Race, covering the 635-nautical mile course at an average speed of 19.24 knots.

“The forecast under-appreciated just how rough the sea state was,” said winning skipper Jason Carroll. “The whole crew is wiped out. We’re tired.”

The latter — a silver and gold replica of the lighthouse awarded since 1954 to the winner of the largest division (108 boats this year) — was presented this year to Sally and Stan Honey for winning with their 56-year-old Cal 40, Illusion, which posted the fastest corrected time in the division in the past 20 years. Illusion’s margin of victory was an eye-opening two hours over the J/122 Zig Zag.

In addition to viewing the race start from Fort Adams, which served as the race headquarters, spectators and sailors has the opportunity to explore Newport on land and sea: race-related activities included tours of a replica British Navy sloop of war at Bowen’s Wharf and the Newport-based tall ship Oliver Hazard Perry, and harbor tours on Amazing Grace and the Coastal Queen.