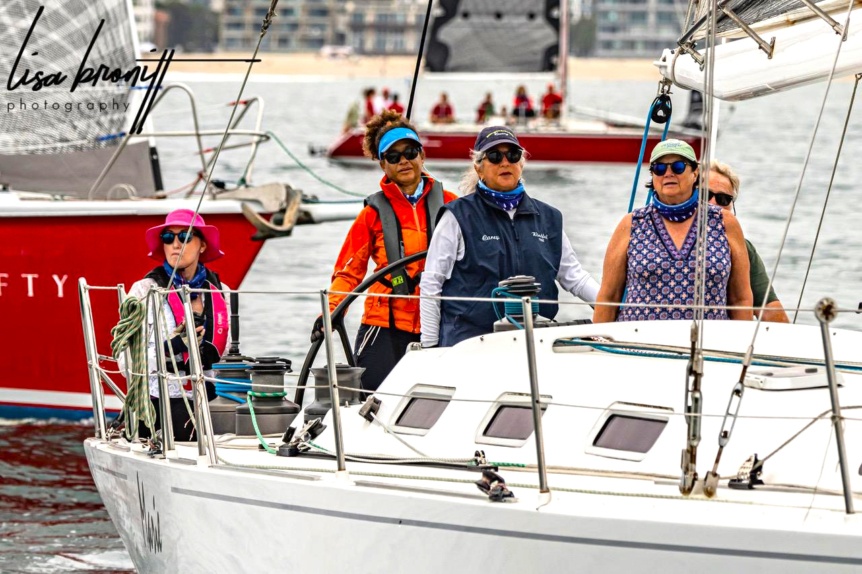 The WOW-WAH regatta has taken place every year since the early 1970s, with one exception: In 2020, the Covid-19 pandemic caused a disruption in the yacht racing season,  and the WOW-WAH 2020 was canceled. But, in 2021, WOW-WAH commenced, with safety precautions in place, and we had a great turnout. It was a momentous occasion, to be back on the water, racing for the perpetual trophies.

On the weekend of August 6th and 7th, 2022, another history-making sailing regatta will take place on the Santa Monica Bay, in beautiful Southern California, out of Marina Del Rey. For about 50 years, the WOW-WAH regatta has progressed to the impressive event it is today and continues to grow each year.

The WOW-WAH (Women On the Water – Woman At the Helm) is the only regatta of its kind, in Marina Del Rey, CA, and is considered by some to be the most joyful and inspiring regatta of the year. This spirited event is two days of thrilling, competitive sailing, with female skippers and crews taking their fine sailing vessels through a variety of courses to the finish line. Two days of comradery,  competition, mentorship, friendship, and hard work coupled with laughter, fun, and after-parties. Weeks of preparation go into this event. To make this unforgettable weekend happen, there are weeks of preparation that include workshops,  planning, scheduling, and organizing managed and coordinated by the Women’s Sailing Association of Santa  Monica Bay (WSASMB) in collaboration with Marina del Rey yacht clubs, volunteers, and sponsors in the sailing community.

The primary intention of WOW-WAH is to promote, encourage and empower women to sail, race, and take the helm. The overarching goal is to have fun on the water in this spectacular sport. It is an opportunity for women new to sailing to get the opportunity to crew in a race, or even helm a boat in a race. Skippers are very generous in supporting this regatta and helping new sailors and racers gain experience. It is also a fun and exciting event for seasoned, veteran sailors and racers.

In addition to the standard rules of yacht racing, the rules of WOW-WAH are as follows:

The WOW-WAH regatta originated as a Women On the Water series. Starting with the  ‘Ladies Got Guts’ race in the early 1970s, created by Skipper Stan Lieberman, with Del Rey Yacht Club sponsorship in Marina del Rey. Stan wanted to encourage women to become interested in and safely learn about, boating. His race was from Marina del Rey, CA to The Isthmus in Catalina, CA, approximately 26 miles across the channel. The rule was that a woman needed to be at the helm of every boat during the race start and finish, and for at least an hour during the race. It was a success and continued to be an annual event.

A few years later, in the mid-1970s, skipper BJ Slack inspired her yacht club to sponsor a  women-only regatta. Then, in the late 1970s, California Yacht Club commodore, Robert S. Wilson coordinated a series of seminars for women who wanted to learn racing skills,  which was enthusiastically attended and embraced. Commodore Wilson organized all the related events into a series, and also contributed a sterling silver cup perpetual trophy. The  WAH (Woman At the Helm) element was incorporated in the late 1970s, and so the regatta became WOW-WAH, as it has since been. Read more about WOW WAH History and view a  list of past winners.

In addition to newbies, the WOW-WAH Regatta attracts a fine level of performance competitors, especially considering the other major regattas that often run on the same weekend, each year.  The skippers/boat owners are crucial to the success of any regatta, and their generosity in including sailors at all levels is fantastic and very much appreciated.

There are three perpetual trophies, in the WOW-WAH Regatta, as well as several other individual trophies.  With perpetual trophies, each year the WOW and WAH winners’ names are engraved on a plaque and her respective trophy is displayed at her yacht club until the following year’s regatta.

In addition to the WOW Robert S. Wilson perpetual, there is also the WAH WSASMB perpetual trophy,  which is a crystal sculpture of a sailboat, donated by WSA in 2002.  There is also a trophy awarded to the top placing Martin 242 in the WOW division. This perpetual trophy is a Martin 242 half model,  which was donated in 2005 and dedicated in memory of Cheryl Rembert,  an active Santa Monica Bay area sailor.

Throughout the racing season, each year, there are a number of local coastal races in Santa Monica Bay, which provide opportunities for Woman At The Helm competition.. Both Marina del Rey and King Harbor, in Redondo  Beach, have various races participating in this program.  Check the WSASMB WOW-WAH web page regularly for updates, as these opportunities are scheduled throughout the racing season.

Find a boat, and get on the helm! There are also opportunities to skipper, crew, or volunteer with the race committee. The web page is also where you can sign up for the WSASMB newsletter and email notices.

Everyone is welcome. Inclusivity is a primary component of WOW-WAH and WSASMB,  which enriches the experience for everyone. All you need is a desire to sail, and a commitment to your skipper, and crew and to learning and/or growing in the sport. Although this is an event promoting female sailors and racers, there have always been some wonderful men who contribute to making it all happen, in all areas, including offering their boats for a woman to helm, in addition to sponsoring, training, coordinating, assisting, working on the race committee, and many other areas.

Be a part of this truly amazing experience. Please join us for the WOW-WAH 2022, by becoming a member of WSASMB – and registering for WOW-WAH, if you have a boat. Or, if you don’t have a boat, join and sign up for a crew position. All levels and types of sailors are welcome.

Caroline Bielskis has enjoyed sailing since she was a teen, and started sailing and racing avidly in 2017. She enjoys day sailing, cruising, and coastal racing in Southern California, and looks forward to exploring other areas of the world via sailboat. She also enjoys kayaking and swimming, and she loves to travel.  Caroline has written and published a children’s book, and is also a voice artist and actor. She previously worked in urban and transportation planning for local governments in California.