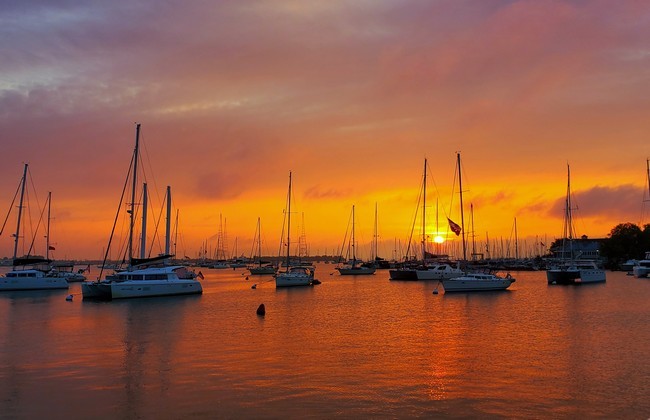 “When in evening, say ye, ‘Fair weather, for the heaven is red’. And if in morning, say, ‘Today will storm, for the sky is red and lowering’.”

In late winter and spring precipitation begins its transition from snow to rain. As rain clouds form, they become thicker and lower in the sky, usually as a warm front approaching from the west climbs on top of an existing cool air mass. Eventually, the clouds turn blue-gray or heavy gray in color. This process of cloud condensation, with varying success, has been predicted ahead of time for centuries. Looking to the west from far off to observe a “mackerel sky, mackerel sky, not yet wet, not long dry”, may well forecast rain within the next six to twelve hours.

An older adage is “red sky in morning, sailor take warning”. It is usually thought that the rising sun in the east lights up clouds to the west that may mark the approach of weather within the next half-day or so. And its corollary, “red sky at night, sailor’s delight”, was imagined to be the setting sun in the west shining on clouds to the east that have already passed over and will usually move even further east by morning. Today, we believe that the “red sky at night” really is a red sky in the west created by the setting sun radiating its light through the thickest tangent to the earth’s atmosphere. Aerosol, dirt, and dust concentrations are greatest in the lowest layers of the atmosphere under sinking air (high pressure). So, a vivid red sunset means high pressure in the west and that means good weather is approaching as the jet stream moves air masses west to east at mid-latitudes. On the other hand, if the sky is red in the east at sunrise, then a high-pressure cell has already passed over. Low pressure and wet weather may follow.

Sometimes, the formation of rain clouds can take only a couple of hours without much warning. Usually, this happens when an approaching cool air mass plows quickly into an existing warm air mass. That involves a temperature drop. Another way that rain can occur unexpectedly and without a temperature drop is when a warm air mass and cool air mass touch along a stationary front that moves very slowly or not at all. Stratiform clouds will form within the warm air mass portion of the stationary front to bring overcast skies and precipitation that could last for days.

There is a way to foretell a lowering sky, before the clouds change color, by using surface air temperature and dew point to determine the height of the cloud base: take a temperature reading, subtract the dew point, divide by 4.5F, and multiply by 1000 feet. For example, on an 80F-degree day with 74% humidity, the surface dew point is 71F and the cloud base will be (80F – 71F) / (4.5F / 1000 feet) or about 2000 feet. If this formula is used again later and the altitude of the cloud base is less, the numerator is decreasing, the sky is lowering, and rain may soon follow.