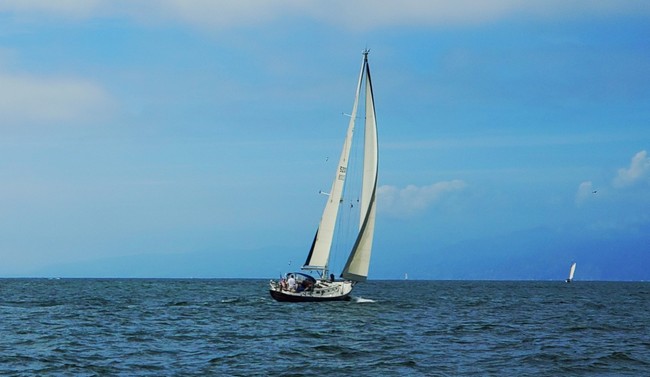 A sailor’s life revolves around the wind. Its direction and its strength govern where he can sail, with what degree of difficulty or comfort, and how quickly. Naturally, the language of sailing reflects how sailors orient themselves and everything around them with reference to the wind.

When sailing, you trim the sails according to the wind direction relative to the boat. As you learn to sail, the all-important “points of sail” become second nature. When you are out on the water, you’ll be constantly aware of them as the wind changes and as your course changes. You will continually fine-tune the trim of your sails to suit the degree to which you are sailing upwind or downwind.

By understanding the points of sail and their implications on crew comfort and sail trim, the helmsman and the crew will be able to work together to move the boat efficiently to any destination they choose.

You sail close-hauled on the very edge of the no-sail-zone — making your best speed toward a destination to windward. This involves a balancing act between boat speed and your course, or angle to the wind. For most boats, that angle is about 45 degrees to the true-wind direction, but it varies with the design of the boat, the shape of the sails (both their geometry and physical condition), and the strength of the wind.

If you attempt to sail a course above close-hauled, or closer to the wind, the sails will no longer deliver full power and the boat will slow down. Sailing a course below close-hauled (or footing off), would be faster but, if your destination is upwind, you would not be making as much progress toward it. Close-hauled is that happy confluence of speed and course that brings the boat upwind with maximum efficiency. Many sailors find close-hauled the most enjoyable point of sail. The wind (this is the apparent wind, remember) will feel the strongest in the crews faces, while the boat bounces along merrily over the waves (maybe sending a bit of spray-on deck) heeling more than on any other point of sail. All of this adds to the exhilaration and fun of sailing.

Start on a beam reach and head up about 45 degrees. Concurrently trim the jib sheet tightly (but not rock hard). Trim the mainsail to the point that its luff just stops bubbling. The boom will lie a little off centerline. experiment with small changes to the trim of both sails — it’s a fine art!

Steering is especially important when sailing close-hauled because with the sails pulled in tight there’s no more to trim in. The driver must be constantly adjusting course to any shifts of wind.

Telltales, short dark yarns or nylon strips streaming on the jib a foot or two back from the luff are an excellent closehauled steering aid.

Except in very light winds, when the boat is barely moving, the helmsman, whether using a tiller or a wheel, should always sit on the windward side for visibility and control. When you’re steering just a little too close to the wind, or pinching, the warning signs are obvious: The jib begins to luff at its leading edge, signaling your entry into the no-sail zone.

When you steer just slightly lower than your optimum close-hauled course, the sails will look full but you are no longer making your best speed to windward. Get in the groove! Concentrate on steering as close to the wind as possible without causing that small luff in the front of the jib with its associated loss of speed.

So now you’re in the groove, but don’t get too comfortable. You’re trying to get to windward, and there’s only one way to get there and that’s by a series of changes in course.

Tacking — Getting From Zig to Zag and Back

A sailboat cannot make any forward progress directly into the wind. When you tried to sail too close to the wind, the sails simply flapped and you lost headway. You may even have put the boat in irons. To reach a destination directly upwind, you have to sail a zigzag course. each leg of the zigzag will be approximately 45 degrees away from the direct line between your starting point and your destination. Think of climbing up a mountain on a trail with a series of switchbacks. This means at some point, you have to get from your zig course to your zag course, which is on the other side of the no-sail zone.

When you turn the boat so that its bow passes entirely through the wind — that is, through the no-sail zone — that’s called tacking. The word tack gets a bit of a workout here, just as you will when you tack the boat.

Where do the apparently multiple meanings of “tack” come from? An old-time square sail was supported along its top by a horizontal spar, or yard, and had control lines on the bottom two corners. When sailing closehauled, one of those corners was hauled forward and down, and was therefore the tack of the sail, and the other was hauled aft. If the wind was on the starboard side, the starboard corner was the tack — starboard tack. To go from sailing with the wind on the ship’s starboard side to sailing with it on the port side, the crew had to literally change tacks.

Of course, we also use the term coming about to mean tacking.

The ability of a modern sailboat to sail close-hauled, sometimes even closer than 40 degrees to the wind’s direction, is due to the boat’s design and the shape of its sails and the forces they generate.

The net sum of the forces in play (sail, keel, and rudder) is the forward motion we enjoy. the wind blowing over the airfoil-shaped sails creates a forward force in the form of aerodynamic lift arising from the pressure difference between the windward and leeward sides of the sails. It also creates the sideways force that causes heeling and, even when the forces are in balance and the boat is steering “straight,” a small amount of leeway.

The hull and keel resist motion, both forward and sideways, because of their inherent drag, but once moving forward, the keel, because of the leeway, is at an angle to the water flow. In just the same way as the rudder generates lift when turned, the keel generates an additional forward force from its hydrodynamic lift.

When the forces are balanced, the boat sails in a straight line but with a few degrees of leeway. however, because of the frequent variations in the wind’s strength and the effect of waves on the hull and keel, this balance is hard to achieve simply with sail trim. the rudder provides the turning force that corrects for changes in the balance.