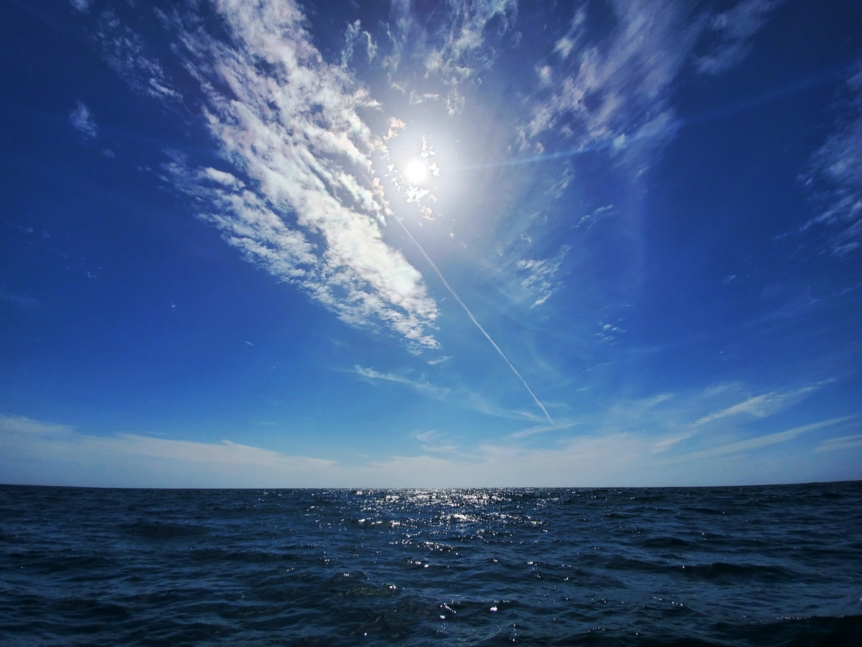 The ocean is a vast space, and sailors inhabit just the surface. Below us, around us, and even above us, we are all affected by what goes on in the oceans. The ocean is where we sailors yearn to be. After all, if you had a choice, would you rather be at your desk or on a boat? While many sailors never stray far from shore, it is essential to understand a bit more about that giant body of water that you love to sail on.

The ocean we all know is a product of billions of years of evolution. As the earth formed and the earth’s surface cooled to a temperature lower than the boiling point of water, rain developed as an atmosphere developed. According to this theory, the ocean formed from the escape of water vapor and other gases from the molten rocks of the earth to the atmosphere surrounding the cooling planet. (National Oceanic and Atmospheric Administration). Current data suggests that there are over 332 million cubic miles of water on earth. The ocean at its deepest is approximately 36,200 feet deep with an average depth of 12,100 feet.

How much do you know about the ocean you sail on? The following ocean facts might help you understand the water you sail on. While you might not want to become an oceanographer, it is important to better understand the dynamic environment you spend so much time in.

If nothing else, you will have some fun facts to use at trivia night.

What Do We Know About The Ocean?

If you were to look at the earth from space, it is evident that the ocean is doing an excellent job of covering most of the surface area. Water covers about 70% of the surface of the earth. How much of the ocean have we explored? Scientists believe that 80% of the sea is unmapped, unobserved, and unexplored.

According to the National Oceanic Service, “Currently, less than ten percent of the global ocean is mapped using modern sonar technology. For the ocean and coastal waters of the United States, only about 35 percent has been mapped with modern methods.”

How Many Oceans Are There?

Do you remember learning this in grade school? Well, the information has somewhat changed. The common belief is that there is one ocean with distinct basins but fluid boundaries between them. The University of Hawaii describes this as such:

“…covering approximately 70 percent of the planet’s surface. Throughout the ocean, there is one interconnected circulation system…There is one ocean with many ocean basins: North Pacific, South Pacific, North Atlantic, South Atlantic, Indian, Southern, and Arctic.”

However, it should be noted that the ocean basins are often simplified as these five: Atlantic, Pacific, Indian, Arctic, and the Southern (Antarctic)

Why Do Waves Exist in the Ocean?

We see the swells when we are sailing and we can feel them when they toss the boat around. Have you ever experienced the force of the wake of a large powerboat that felt th indeed to hurry past you on a lazy afternoon sail? What is happening with all of this moving water?

In his book How to Read Water Author, Tristan Gooley does a great job of explaining the nuances of what we see as either swells or waves.

Waves are created by energy passing through water, causing it to move in a circular motion. Swell is best thought of as waves that have enough energy to travel well beyond the place of their origin. It marches in broader lines and with bigger gaps between each crest.

Waves are commonly created by surface wind and therefore are typically labeled surface waves. So you can have waves on a lake or the ocean. As wind moves across the surface of the water it generates crests that form these waves.

Waves transmit energy, not water, and are commonly caused by the wind as it blows across the ocean, lakes, and rivers. Waves caused by the gravitational pull of the moon and the sun are called tides. The ebb and flow of waves and tides are the life force of our world ocean.

As sailors, we encounter tides whenever we head out on the water. These tides are caused by the moon and the sun and the relationship that gravity has with those celestial bodies. Tides are long-period waves that appear to make the surface of the sea rise and fall and are a direct response to the forces of the moon and sun.

Spring Tides – When both the Sun and Moon are aligned, the effect of each is added together, producing higher than normal tides.