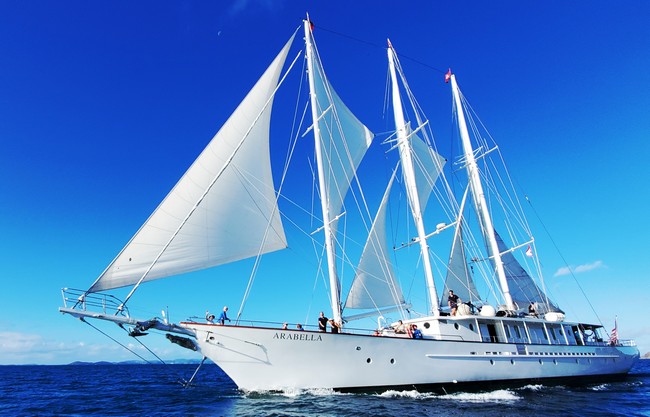 There are eight sails on Arabella, and when she is fully outfitted to move in the wind, she is majestic. When you see her from shore, you ponder what it would be like to feel the movement on her decks. When you are on board, you sit in awe. She is elegant and poised as she adapts under full sail. While Arabella acts like a sailboat, she advances across the ocean like Audrey Hepburn would move across a crowded room in her little black dress.

Arabella moves with grace, sailing like the ocean is hers. When you watch from the bow, all you can see is the sails leaning away from the wind. You can almost see Bernoulli’s math being worked out and you can hear the wind being utilized to bring forth the experience.

Sailing on Arabella is still sailing, but it should not be confused with a dinghy on the lake or your first ride on a Catalina 27.

As an ASA member, you get to experience Arabella firsthand. If you are up to it, you can even take the helm or raise a sail.

Spots are filling up to sail on Arabella in 2022

Will You Be Sailing Arabella?

ASA members toured the waters off Massachusetts and Rhode Island aboard Arabella this past summer. The voyage began in Newport, Rhode Island with stops at Martha’s Vineyard, Nantucket, and Cuttyhunk before returning for a day in the sailing mecca of Newport.

Approaching Martha’s Vineyard on an elegant ship such as Arabella almost immediately puts you in the crosshairs of envy. As in, everyone looks at you green with envy. Her stature at anchor is not necessarily imposing in as much as it is distracting. Her masts rise above the deck and stand sleek against the horizon. Boats sail by to take a look at her — people wave. People stare. You smile. You raise your glass to them.

Anchoring in Nantucket, the tender ride into town allows for some gawking time. The number of beautiful schooners in the harbor is difficult to imagine. Your local marina would be hard-pressed to compare with the population in this harbor 30 miles out to sea. Enjoying clams and lobsters with a view of Arabella at the Sandbar at Jetties Beach proves to be an exercise in self-restraint.  You try not to boast how you came in on “your” yacht, but she was too large to anchor in the main harbor.

With 24 luxurious cabins and a salon large enough for fine dining, the ASA members aboard the Grand Tour take full advantage of the entire ship. The salon doubles as a dance floor. The hot tub is crowded each evening.  The bar is consistently a hotbed of tall tales and bad boat jokes as members wait for their libations. The group starts as 30 strangers and evolves into a large gathering of friends on the deck watching the sunset.

I wave at a passing boat as the passengers on the small vessel circles Arabella.

“That’s a beautiful boat,” they shout.

I smile and nod in agreement.

Such is an afternoon on this magnificent ship where even in these waters filled with experienced sailors, the beauty of the yacht attracts inquisitive eyeballs. When you are on the deck, the sailing community seems to envy you. They stare as if you are part of a different privileged class that sails on multimillion-dollar yachts to glamorous ports as part of everyday life.

For a week on an ASA sponsored sail, you are part of that class.

Arabella and The British Virgin Islands

If you enjoy the Caribbean, you’ll see it differently on an ASA charter on the Arabella. Seven days touring the legendary cruising grounds of the British Virgin Islands with plenty of time for beach bars, snorkeling and even a bonfire on the beach.

ASA members will get a crewed charter through the British Virgin Islands and that means leisurely breakfasts on the boat with a view of the islands, a semi-planned itinerary that allows each member the flexibility to explore on their own or time to join some new-found friends for on-island diversions.

What you’ll do in the British Virgin Islands

The British Virgin Islands are a favorite spot for cruisers simply because of the multitude of options for fun both on and off the water. The crew of the Arabella will make sure that you have as much or as little of that fun as you want.

Have you ever taken the helm of a three-masted mega sailing yacht? Well, you’ll have plenty of opportunities to sail Arabella as the crew will guide you through the ease of navigating the majestic ship.

Interested? Take a look at sailing dates and availability.

Scroll through a gallery of what it’s like to charter on Arabella: