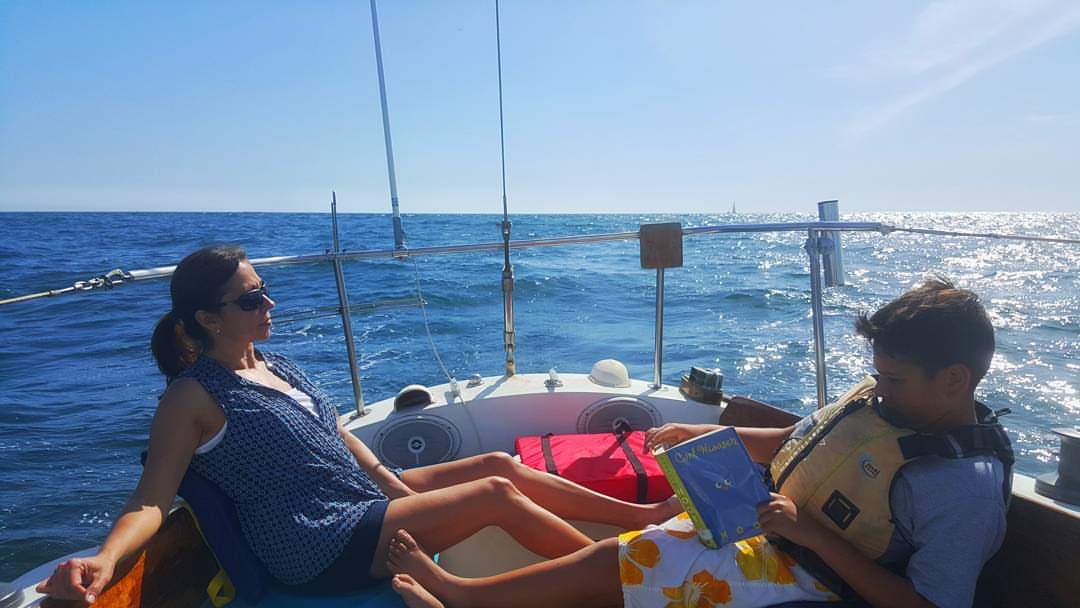 As a kid, I never sailed. I lived close enough to the ocean that people I knew would go there, but my working-class father never really saw it fit to head to the shore for a day at the beach. He certainly did not need to be on a boat.  “I have legs that work perfectly fine on land. I don’t have fins. I don’t need to be surrounded by water.” These were common refrains by my landlubbing father.

Fast forward to me becoming a father, and times have changed. While dating my future wife, we would eye sailboats and talk about “one day” becoming boat owners. We sailed on boats in Mexico, Hawaii, and the Caribbean. It was only a matter of time before we were the proud owners of a 1977 Catalina 27. It also meant that our family would be boat people. When our family expanded to three and then to four, it meant that we would have more hands on deck.

Our children grew up sailing. Our boys know nothing different than being on the water, trimming a sail, cleaning the deck and longing for more wind.

Naturally, we are asked, should kids learn to sail? Our answer is always in the affirmative but the explanation varies depending on the person asking the question. These are some of the examples we tend to share when asked about the benefits of sailing for kids.

Why Should Kids Learn To Sail?

Your kid will become an environmentalist. Without getting political, if your child spends any amount of time on the ocean they will grow to love it. We protect what we love. That does not mean your child will strap themselves to a tree and profess their love for the environment but they will become vocal about plastic pollution and the plight of sea life. Seeing whales up close or swimming with dolphins or even watching a sea turtle float by while waiting for the wind to pick up changes your perspective on the health of the ocean. Your kid will be the next generation of influencers making positive decisions toward keeping our oceans healthy.

Your child will learn responsibility. I will admit that on more than a few occasions, I have had to raise my voice on a sailboat. You see, when a 10-year-old is at the helm, he tends to lose track of the heading. He allows the sails to wander and somehow points the bow in a direction that is only known to him. That is part of learning. There is a steep learning curve on a sailboat and you are forced to take on responsibilities that typically are reserved for much older individuals. As teens, the kids understand that the entire system depends upon the whole crew. You’d be surprised, if your kid wants some beach time before sunset, they can find the fastest heading really quickly. The major benefit is you will be able to count on your child in any situation.

Your family will learn to talk to each other. While having a family dinner with my now college-aged son and his college friend, he explained that she was uncomfortable with our “healthy family dynamic.” “How do you all get along so well?” His answer was telling. “Spend any time on a sailboat and you learn a lot about each other. Whether it is a daysail or sailing vacation, your family spends an inordinate amount of time together while sailing”. The electronic devices are off and the conversations begin. Imagine a family that talks to each other. Yes, sailing makes that happen.

Your family learns to trust and rely on each other. Teamwork is what healthy families recognize and surviving on a boat for any amount of time requires a lot of trust and familiarity. Spend a day, a week or even just a few hours on a boat, and you realize that close quarters can ignite plenty of emotions. What that time also works to do is build on the relationships between the people on the boat. For siblings, once they get past trying to figure out who is in charge they define their roles. They lean on each other for support and they utilize each other’s talents. Eventually, the younger child might even gain a little respect from the older sibling. Eventually.

Kids learn to take and give orders while working toward a common goal.  “I need a serrated knife, a mask and snorkel” My then 15-year-old screamed at me as he surfaced. We were drifting. Dead in the water. What followed was an hour and ten minutes of hard labor for the teenager as he worked to free a line from the prop. “Ghost fishing needs to be addressed, there is no way we can see those lines when we are motoring in open water.” His disgust with the practice of dropping lobster pots across the channel between Anguilla and its outlying islands was exacerbated by his exhaustion. The ability to work under pressure and properly communicate was on full display. His patience with his younger brother who floated nearby was tested.

Your family will benefit. So much happens when you are on a sailboat as a family and that extends to learning about being patient, having the foresight to anticipate your next moves and gaining confidence in so much more than just keeping a heading. There is a sense of adventure that comes from sailing with your kids and it is infectious. Sail with your children and one day they will point at a map and suggest you drop anchor in a spot that you might not be ready for. It is at that point that you realize that your deckhands are far more than passengers. Sailing with kids eventually becomes sailing with a few co-captains.