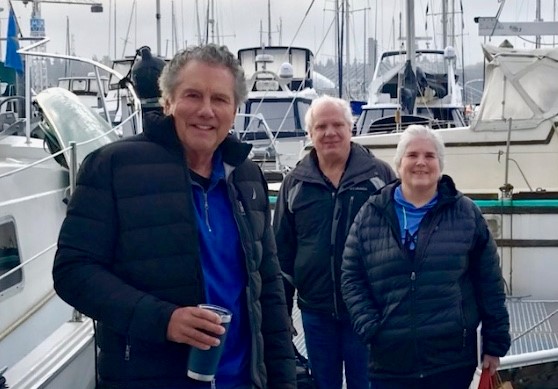 New ASA sailor Angela Baune has spent most of her 57 years in landlocked cities, and in 2017 she was involved in an accident that left her mentally and physically broken. “My brain doesn’t process information as fast as it used to and it takes a lot of repetition to commit things to memory,” explains Angela. In 2021 she and her husband moved to the Seattle area. “I am new to the water, but I was immediately attracted to its beauty.” It wasn’t long until Angela and her husband, Donald, began to think about learning to sail. “We wanted to do more than look at the water from shore. We began in March by learning how to sail a 20-foot Blanchard Knockabout Junior on Lake Union”, a 580-acre freshwater urban lake entirely within the Seattle city limits. “The BKJ was fine, but Puget Sound was beckoning!”

Angela was excited to go to sea, but with her disability, she was concerned about whether she could learn to sail on the ocean. “I thought I would give it my best shot and hopefully learn enough to be a help and not a problem”. She and her husband began their ASA courses in April at Puget Sound Sailing Institute in Tacoma, WA. “My Instructor for ASA 104 was Mike Rice. I had heard that Mike was the owner of Puget Sound Sailing and an amazing Instructor, but I was not prepared for the actual experience of being in his class. Every student at PSSI has access to a PowerPoint presentation video that I could watch over and over multiple times along with studying the ASA textbook. Both have proven invaluable to my comfort level and success. While all my PSSI Instructors, Karl Kraber and Michael Johnston, were very knowledgeable and professional, I can see why they all consider Mike Rice to be the standard to follow”.

“Mike loves sailing and he loves to teach it to anyone interested in learning. He gets to know you by listening to everything you say, then watching how students learn, their strong points and weaknesses. He praises when we are strong and helps to make you feel secure and stronger in areas where you struggle. He prepares you for each step, laying out what you will learn to do and how to do it. He let my husband and me make our own choices, then told us why what we did was correct or incorrect. Mike picked up on my need to have many repetitions of correct practices and helped me reinforce the skills I needed, verbally, visually, and physically. He never rushed us or questioned our abilities. The object of the day was to learn and have fun doing it! Donald and I appreciate ASA for helping us to find Puget Sound Sailing Institute and Mike Rice. We are now studying for ASA 105 and then we have ASA 106 scheduled for Sep 2022.  We look forward to a long and exciting relationship with Mike Rice, Puget Sound Sailing, and ASA!”.

Keen to get started?