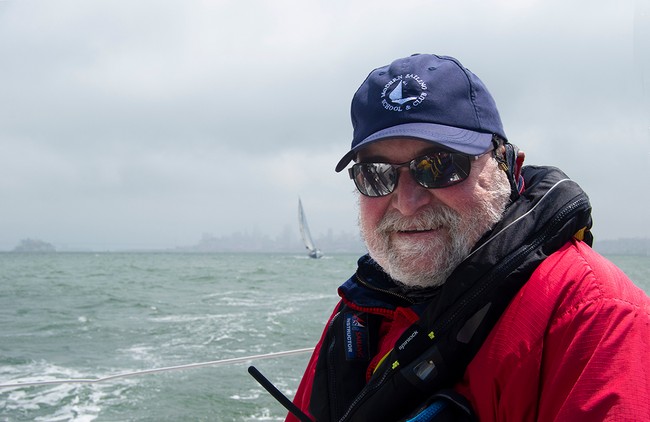 Captain Bill Moreland at Modern Sailing School is a 40 year veteran of sailing. Like many, he just went to the water and began sailing only to fall in love with the lifestyle. These days he is an Instructor Evaluator for the American Sailing Association. He loves to share his passion for sailing with others and has led trips around the world.

In the late 1970’s a couple of interesting things occurred – I was working and my CEO suggested sailing as a hobby to relieve stress. I also had a small group of friends who sailed. So on a whim one day, I drove to Santa Cruz and Jack O’Neils Surf Shop, which also taught sailing on Ensigns 23’. After one day of sailing lessons, I was hooked and haven’t stopped since.

In the many years of passing my passion for sailing on to others, I recently had a student who was an active duty Air Force F16 combat pilot. This student was as dedicated to learning all the elements of sailing as he was to serving the country. A model student, he not only read the ASA book course material, but he also watched YouTube videos to be prepared for the courses. During class, he attentively followed instructions and asked questions for clarity. It was a true honor to have taught him how to sail.

This is a real toss-up. In the 1990’s, I lived in the British Virgin Islands and worked at a resort that had a charter fleet. The resort allowed staff use of their boats on days off. Discovering Caribbean sailing waters was an amazing experience. Over the past couple of years, I have captained destination sails in Tahitian and Croatian waters. Those experiences are close to my heart with the beauty and friendliness of the locals who make you feel so welcomed to their country.

In some cases, depending on location, currents play an important part in your day. My sailing waters are San Francisco Bay, thus on a daily rhythm knowing what the wind and tides are can make for either a very enjoyable day or a very stressful day. Upon boarding a vessel, always check and familiarize yourself with the reefing system. Those who are prepared are those who know the enjoyment of a balanced boat.

It is a sport where one can combine knowledge and skills and work at different levels for their enjoyment. Be it day sailing, cruising to far-off lands, or the thrill of racing in a bay or the ocean, there is something for every kind of sailor.

“By understanding the combined use of nature (the wind) with the design and skillful handling of the boat, you can leave and arrive at a destination in a very contented and peaceful state. (And at all times remember mother nature is in control.)” -Captain Bill Moreland