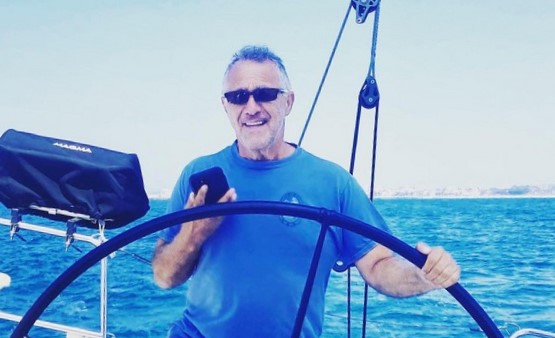 Most of the time, when a sailing skipper rescues someone from the water, it’s one of the crew who fell overboard, and it’s usually a man (85%), but not this time. ASA Student Khosrow Khosravani, with three friends. embarked upon the maiden sail of Khosrow’s Catalina 25 Defiant on the morning of Sun 26 Sep 2021 out of Marina del Rey, CA. Their plan was to head up the coast to Paradise Cove, off Malibu, and swim ashore for lunch. An hour into their trip, under an overcast sky upon a bluish-gray sea, Khosrow was motor-sailing when his eye caught a pod of dolphins swimming right to left across his bow, away from the shore, further out into Santa Monica Bay. The next thing that he sees, or thinks that he sees, just above the surface, is a human hand amidst the dolphins’ frolic. Then, sailing closer, Khosrow spotted the pale shape of a young woman with black hair. She was nude and barely afloat. Without skipping a beat, Khosrow’s ASA training automatically kicked into gear. It was only two weeks earlier that Khosrow, for the first time ever, stepped aboard a 25-foot sailboat to earn his ASA 101 and 103 at Blue Pacific Yachting in Marina del Rey with ASA instructors Frank Duke and Frances Weber.

Khosrow “Koz” Khosravani, former Teaching Fellow in Computer Science at Harvard University Summer School and Extension School, had just moved to Marina del Rey in July 2021. “I saw that everyone here had a sailboat, so I bought one too”. To learn how to sail Defiant, Koz obtained his California Boater’s Card and enrolled in courses with ASA. “One thing that the ASA Instructors at Blue Pacific taught me was how to pull someone out of the water if they went overboard. They taught me this not just once, but many times. It was all fresh in my mind”. Koz knew just how to maneuver his boat in a Figure-8 COB recovery and approach the woman from downwind of her so as not to strike her head bobbing in the water. “When I was about 10 feet away, I tossed her the PFD-4 cushion, but she wasn’t able to hold onto it. She had zero muscle power and could barely move”. Koz made another pass and this time asked his crewman to throw over an Acelane Water Rescue Bag with a 70-foot (reflective) red rope. “She was able to hold onto that rope, so my crew pulled her to the port side of my boat”. Meanwhile, Koz shut down his 9-hp Yamaha outboard engine. “I was concerned about hitting her head against the hull, so I lowered a rope ladder that I had bought only the day before”. Koz intertwined his feet within rungs of the rope ladder in the water, grabbed the woman under the arms, and hoisted her onboard with the help of his crewman. Koz works out at Gold’s Gym in Venice Beach! He’s also a former boxer, wrestler, and has a karate black belt, but it was still difficult for both men to pull that young woman out of Santa Monica Bay and into the boat. Once in the cockpit, Koz asked the woman if there was anyone else in the water. She could barely speak, but she was able to reply that she was the only one out there.

Koz placed the woman in the care of his two crewwomen and called “Mayday” on his VHF radio. From his GPS, Koz was able to relay his position. He was about three nautical miles off Pacific Palisades and it was 1130. About six miles away, L.A. County Fire Department Ocean Lifeguard Captain Matthew “Matt” Rhodes heard the call. He reached Koz’s boat seven minutes later. The woman’s skin was ashen. “This was a really weird one”, relates Captain Rhodes. “Why was this person so far offshore”? The young woman was raced to Ronald Reagan UCLA Medical Center, treated three days for hypothermia, and then released. It turned out that the woman, in her mid-20s, went swimming nude around midnight the night before off Venice Beach and drifted out to sea. She had been afloat in 68-degree water for nearly twelve hours with no clothing and no flotation.

Captain Rhodes told Koz that, “Without you there, she would have died”.  Koz, 59, replied that he does wonder about how everything aligned just right for this young woman. “I came [to the United States] in 1978 from Iran. I do not practice religion and I am not that spiritual. I am a scientist and I do not believe in divine intervention, but thank God for all that did go right that day! The important thing is to be prepared. When I was buying my safety gear and taking my ASA classes, some people said why do you spend so much money? Just go out and teach yourself. But I told them they are wrong. This is serious business. I used all the equipment that I bought and everything that I was taught by my ASA Instructors to save that woman. Before my friends and I left the dock that day, I talked with them for an hour about how to use the safety equipment and the radio in case I fell off the boat. I wanted them to be able to come back to get me! I told them that will never happen and we’ll never need to use the safety equipment but it’s good to know just in case”. My ASA Instructors at Blue Pacific taught me well. ASA should be proud that they spent so much time with me about safety. I was only sailing for two weeks, yet my friends and I were able to save the life of that young woman with the help of those dolphins!”.