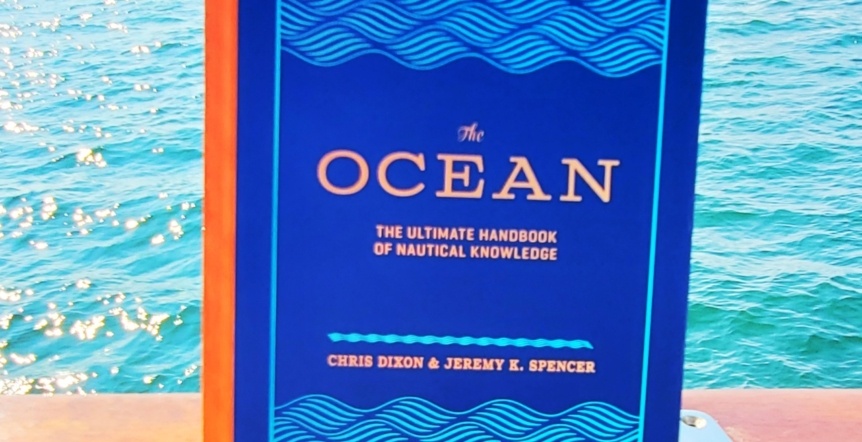 I have two boys. They have always been inquisitive. Being on a boat makes kids curious about the world around them. I had a lot of answers, but they had far more questions.

The Ocean: The Ultimate Handbook of Nautical Knowledge by Chris Dixon and Jeremy Spencer is chock full of answers.

If there is a book that every sailor needs it is the “ultimate handbook of nautical knowledge” that has all the ocean facts that you never knew you needed.

The prose bounces around from educational to humorous to insightful to familiar.  Sit on the deck with a group of sailors and they will fill the time with stories of lessons learned and experiences gained. The ocean puts you on a boat with surfers, divers, scientists, scholars, athletes, heroes, and heroines. The stories and information are presented in a format that is less textbook and more anecdotal. From the words of a rescue swimmer to a big wave surfer to an oceanographer, take a peek into a dinner conversation with all of the ocean people you want to have as good friends.

Broken up into six sections, Boating, Surfing, Science, Survival, SCUBA and Snorkelling, and Fishing, the topics are approached by leaning on experts in the fields or experienced participants. The information flows like a discussion at a campfire on the beach rather than a lecture in a study hall.

10 things I learned from The Ocean: The Ultimate Handbook of Nautical Knowledge

( I learned far more but here are ten)

As a sailor, you may have an interest in surfing or diving and The Ocean lends some insight into those worlds.  Wanting to surf is not just about buying a board and getting out onto the water, it is about understanding surf culture and etiquette. An essay with renowned surf writers, tips on handling your wetsuit, and learning to identify waves are just the tip of the iceberg of tips. Read about Aunty Rell and the break at Makaha and understand how to surf a new spot without infringing on anyone’s space. This book tells you about both the rules and the unwritten rules when you tackle a new environment.

The contributors range from the rescue swimmer who explains the basic necessities when calling for help to the Photographer who helps your ability to focus in the viewfinder. Oceanographers, big wave surfers, scientists and Watermen all lend knowledge to the book.

You’ll never put the book down because it begs to be picked up again when the next question arises.  It’s written in such a way that you will read through it like a compelling novel while also utilizing the information like an index of ideas. From fact checking to technique building, this book will serve you well for tying boat knots to fishing knots. From identifying clouds to identifying seabirds.

In its simplest form, The Ocean by Chris Dixon and Jeremy Spencer put to paper what it means to respect the ocean and all that happens in it and around it. From the personalities that frame what we think and say about the ocean to the techniques to perform at a high level upon the water to the challenge of doing our part to protect this body that we cherish.  As you embrace your love for the ocean, this book and its contributors share their vast experience to help you build upon your overall appreciation for the place that so many of us call home. The Ocean.