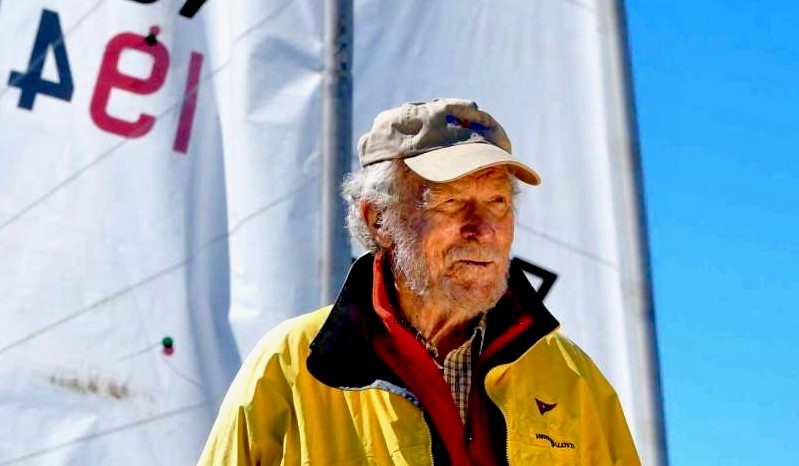 Following in the wake of the death of Frank Butler, President and Chief Executive Officer of Catalina Yachts, in Nov 2020 at age 92, boat designer and three-time Olympian Bruce Kirby, best known globally as the designer of the Laser 14 Olympic sailing dinghy, passed away at his home in Connecticut on 19 Jul 2021, also at age 92. In 1969, at the request of a friend calling from Montreal to design a “car-topper” sailboat, Kirby sketched a preliminary design for the Laser while still on the telephone with boat builder and fellow Canadian Ian Bruce. Kirby kept that faded sketch, which he called the “Million Dollar Doodle”, in a drawer of his waterfront home in Rowayton, CT, for over fifty years. “That sketch paid for our house”, says Margo, Kirby’s wife of 65 years. At the New York Boat Show in Jan 1971, 144 Lasers sold off the floor, a record number of sales that still stands today.

Born in Ottawa, Ontario, in 1929, Kirby was a sailor and newspaperman before he garnered acclaim as a yacht designer. He enjoyed a lifetime as a competitive sailor beginning in International 14 dinghies at age 15. After being beaten at a Cowes Regatta in heavy wind, he drew the Kirby Mark 1 on a piece of shelf paper. It was fast upwind in a breeze. Kirby sold 40 of them. He went on to design several International 14s, 739 boats total, and won the World Championships in 1958 and 1961. Along the way, Kirby also jumped into the Finn class to sail for Canada in the 1956 Melbourne Olympics. Kirby skipped the 1960 Rome Olympics while he and Margo raised their two daughters, but he returned to Finn Class at the 1964 Tokyo Olympics in Enoshima, the same venue for Tokyo 2020. At Tokyo 1964, he was in second place in heavy air when the Russian ahead of him broached, capsized, and collided. Kirby believed that he violated a race rule and asked Paul Elvstrom, four-time Olympic Gold Medalist (three consecutive in Finn Class) his opinion. Elvstrom deadpanned that, “A capsized sailor cannot hoist a protest flag!” Even so, Kirby disqualified himself to race officials. Kirby’s third and final Olympics was in Star Class at the 1968 Mexico City Games on Acapulco Bay.

In his early adult life, Kirby was also a journalist. He started work in 1949 as a reporter for the Ottawa Journal. In 1956, he married Margo and moved to the Montreal Star. By the mid-1960s Kirby was an editor of One Design and Offshore Yachtsman (now Sailing World). In 1970, Kirby became editor of Yacht Racing where he stayed until 1975. By then, mounting Laser royalties enabled Kirby to become a full-time, self-taught, yacht designer. He designed the Apollo 16, Sonar 23, Blazer 23, San Juan 24, Ideal 18, and the Kirby 23, 25, and 30. For several years, after that Oct 1969 telephone call and “million-dollar doodle” that led to the Laser, Kirby jokingly urged Margo to answer every call, “because it might be someone who will ask me to design a 12-Metre”! That call actually did come in 1981, after Kirby served as both the designer and skipper of Runaway, one of three yachts in Canada’s 1981 Admiral’s Cup campaign. Kirby designed Canada One for the 1983 Cup, then turned her into the wing-keeled Canada Two for the 1987 Cup. “I remember listening to the America’s Cup on CBC radio with my father and brother at Lac Deschenes Sailing Club and at Britannia Yacht Club, both on the Ottawa River, before the war, in 1934 and in 1937 when Ranger beat Endeavor.”

Today, Bruce Kirby is considered to be one of the great yacht designers of all time. The Laser is the first of the single-manufacturer one designs that are now prolific in the sport of sailing. Over a quarter-million have been built. Bruce Kirby was inducted into the Sailing Hall of Fame in 2012 and named a Member of the Order of Canada in 2017. Margo recalls her mother asking her new son-in-law, “When will you get sailing out of your system?” He never did.