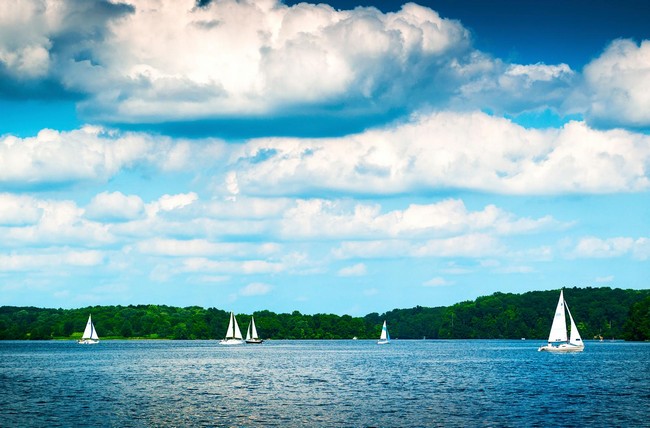 Captain in You Sailing Schools is really three distinct sailing experiences under the umbrella of one common theme. That is to learn to be proficient on the water and to become a sailor. The three schools of Captain In You Sailing Schools, Delmarva Sailing School, Nockamixon Sailing School and Virgin Islands Sailing Academy all teach ASA courses in different settings

ASA spoke with Captain In You about its schools, their sailing grounds, and their programs.

The “Captain in You Sailing Schools” (CIYSS) provide ASA students with four sailing venues lake, bay, coastal and ocean from three separate locations. For those land locked sailors, they can discover the Captain in You at the “Lake Nockamixon” sailing school just north of Philadelphia.  The Delmarva Sailing School is another CIYSS school home-ported in historic Rock Hall Maryland on the beautiful Chesapeake Bay. The Chesapeake Bay is truly a national treasure, full of history and naval tradition. It has thousands of miles of shoreline, hundreds of tributaries with secluded anchorages and an abundance of fish, birds, and wildlife. For Island sailing there is the Virgin Island Sailing Academy located at Red Hook, Saint Thomas, USVI. Students attending the academy island hop for a week visiting numerous US and British Virgin Island ports. For ocean sailing both Delmarva Sailing School and Virgin Islands Sailing Schools offer true ocean passages as we reposition our sailboat Gallivant on the Chesapeake Bay in the summer and in the islands in the winter.  These educational experiences turn out to be more fun than most vacations. These three schools are all individual ASA affiliates under the corporate umbrella of Captain in You Sailing Schools Inc.

For example, students can learn the basics, ASA 101, on the protected waters of Lake Nockamixon, then advance to more challenging bay and coastal cruising ASA 103/104/106 on the Chesapeake Bay and mid-Atlantic coast. Alternatively, one can begin all three courses at ST Thomas USVI and secure the popular bareboating certification, ASA 104, by tackling the Caribbean trade winds in one of the world’s best sailing grounds and the actual site of many popular bareboat charter companies.  You will learn in the waters where you will most likely be bareboating.

Additionally, in the spring and again in the fall the most advanced and adventurist students earn their stripes by making an ocean passage from the Chesapeake Bay to St Thomas USVI, ASA 107/108 or St. Thomas back to the Chesapeake.  This is a Bluewater experience that is the ultimate confidence builder.

Finally, during the long cold winter months the school offers ASA105 Coastal Navigation, ASA107, Celestial Navigation and the ASA119 Marine Weather Endorsement in a classroom environment or as home studies.

The quality of instruction makes or breaks any ASA sailing school. CIYSS recognizes that there are lots of good sailors, but relatively few of them are also good teachers. CIYSS believes that reciting what it says in the book is not teaching. What is teaching in our book is having the ability to present complex processes in simple and understandable ways, and doling so with empathy, humor, and a genuine and abundant sense of caring.

The school’s culture is built around providing all students with a positive and fulfilling experience, whether they go on to circumnavigate or rarely sail again. We focus on understanding the student’s expectations and fulfilling those expectations by quickly assessing how each individual best learns, either visually, audibly or by doing. Then we strive to teach sailing concepts in ways that will be fun and most effective for each person, while instilling and cultivating a sense of teamwork required to safety and efficiently handle a sailing vessel in varying conditions and circumstances. We accomplish all this by having a good sense of humor, allot of patience, empathy, and especially enthusiasm for making learning fun.

By any measure, the ASA publications are top notch, easy to read, appropriately technical, and well-illustrated. CIYSS has complemented the ASA learning process with its internally developed Captain in You Sailing Schools sailing curriculum for each course.  The supplemental information, provide for free, strictly adheres to the ASA methods, but condenses the material for quick and frequent review after the student has read the book. It has been a big hit with our students. We also offer a veteran’s program and practice sailing sessions which inexpensively allow former students to keep up their skills.

Since the school began operating in 2008 it has taught thousands of people to sail in accordance with American Sailing Association and The Captain in You Sailing School’s high standards. Our success has principally come for two reasons. One, we do not simply sell sailing lessons, we match the student’s needs with our offerings, a big difference.  Two, in most cases, we provided a liveaboard teaching platform where the student is immersed in nothing but learning to sail with little distraction. There is a dedicated instructor always by their side and they are with other students of like mind. A typical class, ASA 101, 103,104 will start on a Saturday morning and end 7-9 days later. Each day is filled with a pre-sail lecture and then on-the-water sailing skills practice. Each night is spent at a different Chesapeake Bay or Caribbean Island port-of-call where student can enjoy first class dining ashore.  Unlike other schools that provide education in a day sailor program or classroom and return to their home port at the end of the day, our sailing classes emphasize learning in a real-world environment which is conducted while in route to fun destinations on the Chesapeake Bay, including Annapolis, Saint Michaels, Galesville, the Magothy River, the Rhode River, Solomons Island or Saint Thomas, Josh Van Dyke, Tortola, or Virgin Gorda in the USVI/ BVI Caribbean waters.

Our instructors live side by side with our students and are on the ready to answer questions or give a bit of extra instructions where needed. Or simply to spin a yarn, which enriches the student’s overall experience.  This immersion methodology is the best way for a typical student to enter the school as a land-lover and finish as a confident sailor.