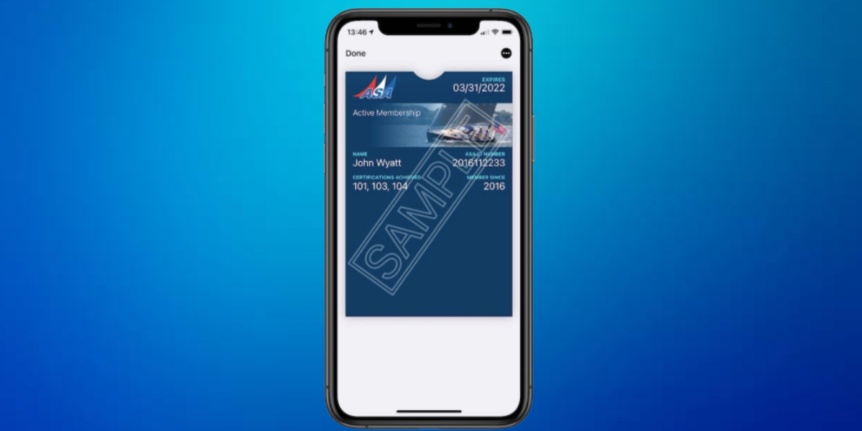 For Immediate Release: The American Sailing Association has launched a new Digital Membership Card for its members that is the first step to going paperless for its membership process.

LOS ANGELES – April 28, 2021 – The American Sailing Association (ASA), is embracing technology as they launch a new Digital Membership Card for mobile devices. As the world becomes increasingly accessible via our hand held devices,  ASA has moved to give its members access to their certification information via a Digital Membership Card.

As part of a push to reduce plastic pollution and the strain on our landfills, ASA is reducing the quantity of paper and plastic products that are generated by their membership process. Eliminating plastic printed cards as well as all paper products involved in the mailing of these membership documents is a first step in going digital for the organization.

“Like the sport of sailing itself, the ASA is constantly looking for new ways to adapt and grow. This new digital option gives our members the ability to download their membership card instantly upon becoming members,” said Jonathan Payne, Chief Marketing Officer.

The Digital Membership Card can be downloaded directly onto mobile devices using a mobile application such as Apple Wallet for iOS devices or Wallet Passes for Android devices. The membership card will be accessed much like airline passes, coupons, or event tickets. The Digital Membership Card contains more information than the printed version. Members will see their certifications as well as the schools they received their certifications from. They will also see their contact information on file and can update it if it is wrong, ensuring they continue to receive ASA communications, member benefit updates, and certifications without disruption.

Active ASA Members can download their Digital Membership Card to their mobile device by logging on to the ASA Members Portal at members.asa.com and clicking on My Membership.

The American Sailing Association (ASA) has been the leader in U.S. sailing education for 36 years. The Association has grown to include an international network of more than 400 professionally accredited sailing schools. More than one million certifications have been awarded to over 515,000 people who have been introduced to sailing through ASA schools, clubs and programs since 1983. For more information, visit www.asa.com.