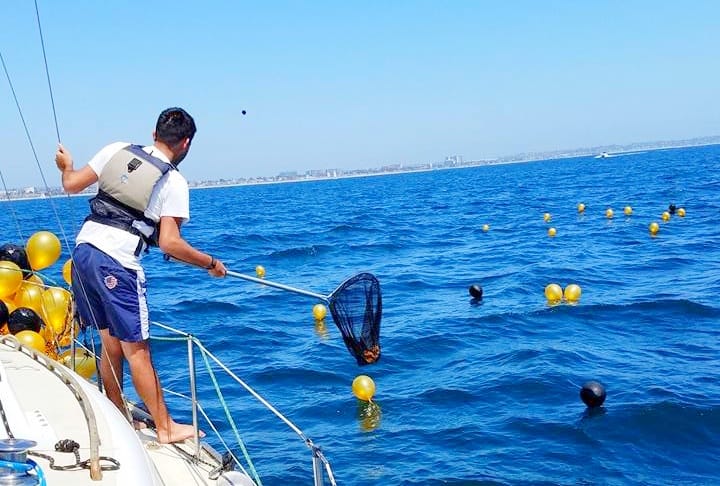 Every time we hoist a sail we utilize a natural resource that needs attention. The water we sail on needs an advocate and that person is you. The American Sailing Association is committed to addressing the issue of plastic pollution and environmental stewardship. Oceans and lakes are our playgrounds and we have an inherent responsibility to protect them.

Sailors Can Truly Change The World

In an impassioned meeting at the offices of the American Sailing Association, far from the concerns of sail trim or tacking angles, ASA Founder Lenny Shabes was speaking to a group of fellow educators and ASA board members. They were discussing pollution in the world’s oceans and waterways, specifically that of plastic, which makes up 80% of the debris in the ocean.

“We’re all sailors here and over a million sailors have worked through our system on some level,” said Shabes. “That’s a lot of people who look to us or touch base when it comes to all things sailing. With that in mind, we should impart the responsibility we all need to carry when we’re out on the water.”

“It’s so easy to help, just do a few things differently when you’re on the boat,” says Cindy Shabes, president of the ASA. “Little things like not packing plastic straws, using reusable water bottles and scooping plastic debris out of the water when you see it. It sounds like nothing but if we all start developing these kinds of habits, it not only makes a difference but sets an example and establishes a mindset that can go beyond the time we spend on our boats.”

According to Ecowatch.com one million sea birds and 100,000 marine mammals are killed annually from plastic in our oceans. But what’s even more relevant, when it comes to plastic in the oceans, is not the image we’ve all seen of a dead seabird filled with little bits of plastic debris where food should be. As horrible and jarring as that is, what’s more germane is what’s happening to the one-cell universe that exists at the foundation of the ocean lifecycle. As it turns out, plastic never breaks down completely and once it reaches the size where phytoplankton mistakes the microscopic particles as food, systemic problems from that ripple throughout the entire food chain.

Onegreenplanet.org reports that there is 270,000 tons of plastic floating in the oceans with 70,000 species of wildlife threatened by its existence.

“We can’t sit idly by while the oceans get ruined,” Lenny Shabes says “We should be a force that strives hard to take care of the oceans.” ASA is committed to helping the cause in any way it can. We need our members to be part of the ongoing mitigation that is constantly happening. We will also keep looking for ways to get through to fellow sailors, reminding them of the situation and informing them about what they can do to help. Through the popular social media channels ASA has created (now 180,000 page-likes on Facebook) and a more than a substantial mailing list, we can reach quite a few sailing citizens. ASA has supported wiz-kid Boyan Slat’s Ocean Cleanup, Sailors for the Sea, (sailorsforthesea.org) 4 Oceans and forged awareness campaigns that urge sailors to be mindful of their own behavior when sailing.

“For the first 20-years ASA’s focus was on creating systems and materials that would give instructors the tools to turn out sailors that would be competent, safe and better for the experience“, Shabes said. “That is still our number one priority, but after being part of this world for so long now, combined with the fact that the plastic situation is much worse than it’s ever been, we want to be an agent for some kind of change.”

There is one thing that every single sailor has in common – our shared love for this amazing environment. We all want to protect it… we look to do our part. Remember the Plastic Pollution Purge – bring back more plastic that you take!

5 Simple Ways To Make a Difference