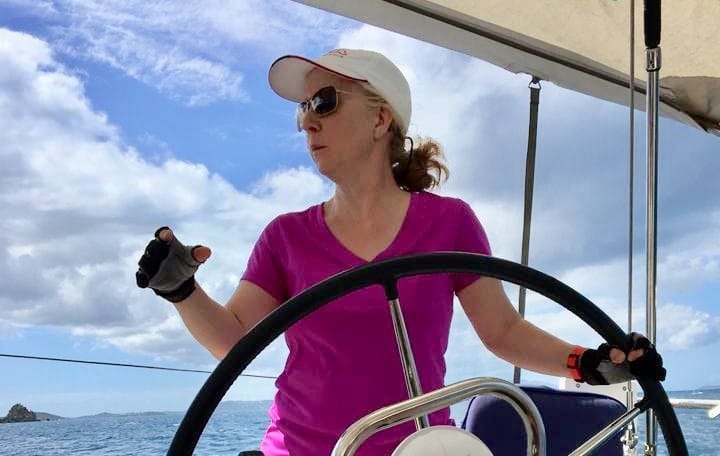 Captain Sara Burke is a role model. As a sailing instructor at Manhattan Sailing School, she is a champion of the sailing lifestyle and a model of what sailing is becoming. Her sailing story is about perseverance and adaptability but boils down to her love for the ocean. Read her story below and you’ll realize that her positivity about sailing is a springboard to be better. Better on the water and better in other aspects of your life. A lover of the ocean, Sara Burke needs sailing but sailing needs her more.

I grew up in a part of north Texas that was so very dry and brown, it seemed like I was always trying to get to the water, any water. One of my earliest memories is holding on to my dad’s hand so I could stand knee deep in one of the only creeks in the county. Given what turned out to be a lifelong desire to live near and be on the water, I finally settled in New York City, where you can be a citizen of New York Harbor no matter which borough you live in (and I’ve lived in a few).

I got into sailing after first helping to build a couple of small wooden sailboats, but also doing a lot of sea kayaking in my 20s in the Pacific Northwest and British Columbia, and then taking a break from adventure to work, have kids and – unexpectedly – become a caregiver for their dad. To be honest, that last part, the caregiver part, was hard, scary and stretched out over almost five years. At the end of that time, I found myself raising elementary school-aged daughters alone and wanting to reconnect with the water for my sanity and my soul.

But whereas earlier in my life I had always followed the lead of a boyfriend who was a more experienced seaman, at this point in my life I wanted to become a competent sailor on my own initiative. So I enrolled in a basic sailing class, joined a sailing club, and was soon logging hundreds of hours of sailing each season in the evenings and on weekends, thanks to the great guy I eventually married. He saw how much I needed to sail, and later how hard I worked to get my USCG Masters license, sailing endorsement, and ASA instructor credentials to teach sailing. He made sure our newly configured family didn’t suffer too much from it.

As a sailing instructor, I’ve been continually humbled by the vast number of “problem-solving opportunities” that crop up when sailing, some due to our own mistakes and some to Murphy’s law. In the New York metropolitan area we get a lot of new immigrants, still working on their English language skills, who want to learn to sail. Between the strange new sailing jargon they are exposed to (“starboard” “vang” “stern pulpit”) and the gaps between our languages, problems to solve are sometimes humorously compounded. One of my most memorable students was an enthusiastic but shy engineer and new arrival. He knew precisely what to do when I asked him to attach the halyard shackle to the head of the mainsail, but that pesky shackle was very hard to snap shut, and he didn’t know how to communicate this without seeming weak – he told me with remarkable eloquence later – when it didn’t seem to close all the way.

Fast-forward to raising the sail. Everything went fine as the halyard pulled the mainsail all the way up the mast. Then, much faster than it had gone up, the sail came crashing down, leaving the halyard skyed. When we got back to the docks and my crew realized fixing the problem meant that some lucky person got to go up the mast in a bosun’s chair, all the phones came out with video switched on and Instagram primed. We were the envy of the sailing school that afternoon, and I joked that I should charge extra for special training.

That being said, my most memorable teaching experience so far was with a wonderful group – all of us now friends – all competent basic sailors who came for a week to focus on coastal cruising and bareboat chartering, on my very first cruise teaching in the Caribbean. Our boat was with a flotilla but got separated for a night when we snagged our prop on a mooring line and spent the late afternoon “problem solving”. After the initial shock – the motor suddenly stopped, and we went dead in the water – my crew calmly set about figuring out what went wrong. In a couple of hours, we were freed and again making way, to great cheers. It was almost dusk, so instead of joining the flotilla, we decided to anchor nearby for the night, to grill our best steaks and toast each other with our best wine so we could savor the wonderful feeling of pulling together as a team and managing to get ourselves out of a right mess.

My favorite place to sail is the place I’m dreaming about but haven’t gone yet. Right now that would be the Greek Islands, probably in the Ionian Sea. I was almost a classics major in college and have studied enough texts in ancient Greek that sailing in Greece is definitely on my bucket list. A wonderful student of mine was a classics major in college and – hopefully with the help of one of our former professors – we are slowly plotting a post-Covid vaccination trip that combines sailing with a deep dive into Greek history. We hope to do some deep diving, too!

Beginning sailors, and the sailing-curious, should know that the concepts you learn over a few days in a sailing course will not make you into a sailor. That requires lots of practice, which translates into lots of fun, especially if you can sail with more experienced sailors, who are almost always happy to teach you some of what they know.

Those with a bit of sailing experience and wanting more should know that you don’t have to own a boat to become a good sailor. In fact, buying a boat too early on in your sailing career can impede your progress, especially if you end up spending the majority of your “boat time” maintaining and not sailing. Look for a sailing club with a fleet or for community sailing opportunities. Once you have basic sailing and crew responsibilities down you can also gain experience and meet new sailors in a wide variety of ways, like crewing for Wednesday night “beer can” races or helping with boat deliveries. Get involved with a local regatta’s race committee as a volunteer. Stay in contact with your instructors. All these can help you find opportunities to do a variety of kinds of sailing. Then when you take more advanced sailing classes to build your knowledge, you’ll have the experiential base to match.

Who knows why we are drawn to sailing? Of course, there is the satisfaction that comes from an activity that allows you to gain mastery over a lifetime while never having to worry you’ll somehow exhaust the combined knowledge and seamanship we humans have amassed. There is the fact that sailing presents an equal challenge to both intellect and body, an exhilarating and unrivaled stimulation. And there is the almost religious feeling of being in Nature, subject to her awesome forces and realities.

ASA: How do we attract more women to sailing? and
Are there obstacles to sailing for women that are not widely known?

These two questions are so closely related I’d like to address them together. Let’s start with the fact that – while ideas about gender might be bending toward greater equality – sailing is still a macho sport. Why is that?

Big bodies of water animated by weather and currents can be treacherous, physically demanding settings. Navigating them can require not only knowledge but courage, strength and determination. These are qualities that men value, but they are not qualities exclusive to men. Around the world every day women show courage, physical strength and determination as they embark on careers, raise children, and hold families and communities together. Yet, there is sometimes a whiff in the air that women might not be tough enough, or confident enough, to rise to the challenges that present themselves when sailing, or around the mechanics of boats and engines. This idea is still prevalent enough that we need to address it straight on.

Most of the women I’ve met who want to learn to sail have a vision of themselves as skipper of a boat one day. To attract more women to sailing we need to showcase confident female role models – not only women who are rock stars of sailing, like Dee Caffari, Tracy Edwards or Dawn Riley, but community-based role models too, women who are captains, skippers in yacht clubs and instructors in sailing schools. I enjoy sailing with men and women, but all-woman sailing experiences can be instructive and empowering. Not surprisingly, most boats are set up for men: their size, their muscle mass, a more individualist way of doing things. But boats don’t have to be set up this way, and even when they are, on many an all-female racing team, clever divisions of labor and unconventional teamwork may be necessary to trim a line set up for your average large man.

What do we need to say to attract more women to sailing? Just appeal to women’s competence. “Come sail! Women can get the job done.”

“One of the main reasons I sail is that – when the wind is fair, and I feel at one with the vessel – it takes me back like nothing else to the effortless joy of childhood play. Sailing keeps you young.” – Captain Sara Burke

Captain Sara Burke can be found at Manhattan Sailing School