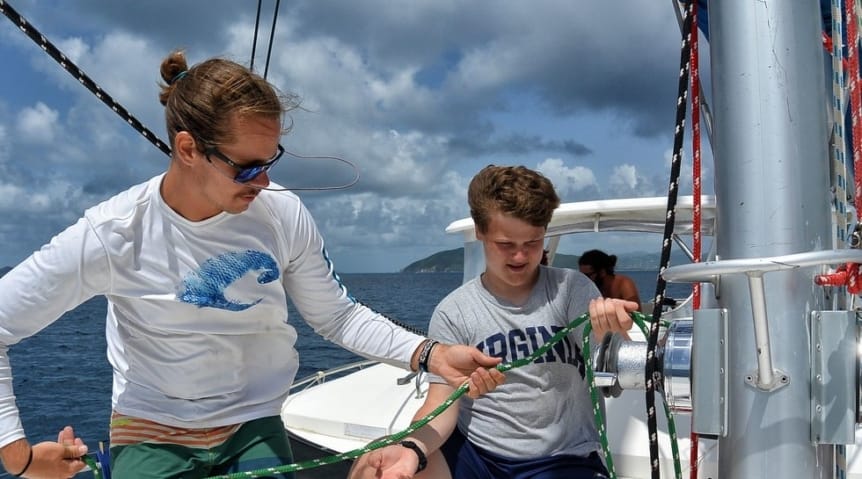 In 2011, after five years in the making, the maiden voyage of SeaTrek FATHOMS set sail. Now entering the summer of 2021, ASA School SeaTrek BVI is celebrating the 10th anniversary of their FATHOMS voyages – Focused Adventure Through Hands-On Marine Science.

The FATHOMS marine biology curriculum is designed to present multidisciplinary marine science concepts and equip the students with the tools necessary to investigate, better understand, and impact the world around them by applying the scientific method to a variety of experiences, including labs, field studies, and community service projects. FATHOMS also collaborates with local organizations like the Jost Van Dykes Preservation Society, Association of Reef Keepers, BVI Conservation and Fisheries Department, and the National Parks Trust to engage students in real research and conservation projects. In working with these groups, students are responsible for collecting and reporting data and educating BVI residents. Click here for a deeper understanding of the program’s origins.

Kaitlin G., SeaTrek’s 2021 Lead Biologist, says, “As a previous participant in the FATHOMS program, I have so many good things to say from my experience both during and after my time in the BVI, but I’ll do my best to sum it up!

I decided to participate in FATHOMS right before I started college, where I studied marine ecology. I was looking to find a summer program packed with adventure and would give me a leg up in my future biology classes.

Not only can I attribute much of my success as an educator to FATHOMS, but equally as much to fuel my passion for the world of marine science. Marine science is an incredibly diverse field, and this is the perfect program to give you a well-rounded introduction to what life as a marine biologist might look like!” – Kaitlin G, CO

Ally M., an environmental educator, states, “As a young high-schooler curious to explore a career in marine science, I was initially attracted to FATHOMS so that I could learn first-hand what a marine biologist does and how I could kickstart my career in that field. FATHOMS gave me that experience and more. Thanks to the well-designed curriculum and floating classroom, I learned valuable skills such as principles of scientific diving, bonded with fellow future marine scientists and mentors, and had the time of my life! I went on to study Environmental/ Marine Science and Sustainability at the University of Tampa. My FATHOMS experience set me ahead of my classmates, but it is also a big part of why I received a large scholarship for my tuition. I am currently working as an environmental educator, and it’s cool to come full circle; now I get to pass on to other young students the same kind of invaluable, hands-on learning experiences that I received in FATHOMS.” – Ally M, FL

Aly Y., an alum from FATHOMS maiden voyage, remarks, “I was attracted to FATHOMS because I loved the sea and wanted to explore it through science and local people. FATHOMS helped ignite my passion for researching and working with coastal communities. This passion still drives me today, and I am currently working on a Ph.D. in Global Studies at the University of Iceland to continue to do this kind of work in the future. I can’t believe that a decade has passed since those life-changing two weeks in 2011. Although I still see myself as a student and don’t think that will ever change, I am now working as the scientist I imagined becoming during FATHOMS. I have published a scientific paper using data that I collected underwater, using the same methods I was first taught at FATHOMS. FATHOMS was an incredible experience for me, and I am lucky to have had the opportunity to participate in it.” – Aly Y, Iceland

SeaTrek BVI is an ASA school that introduces teens to the ocean environment through sailing and scuba diving. Each summer their voyages delve into marine science, adventure, and hands-on learning in the Caribbean. Students participate in these programs while living aboard one of their 48-foot catamarans. SeaTrek BVI promotes teen sailors and environmental awareness.