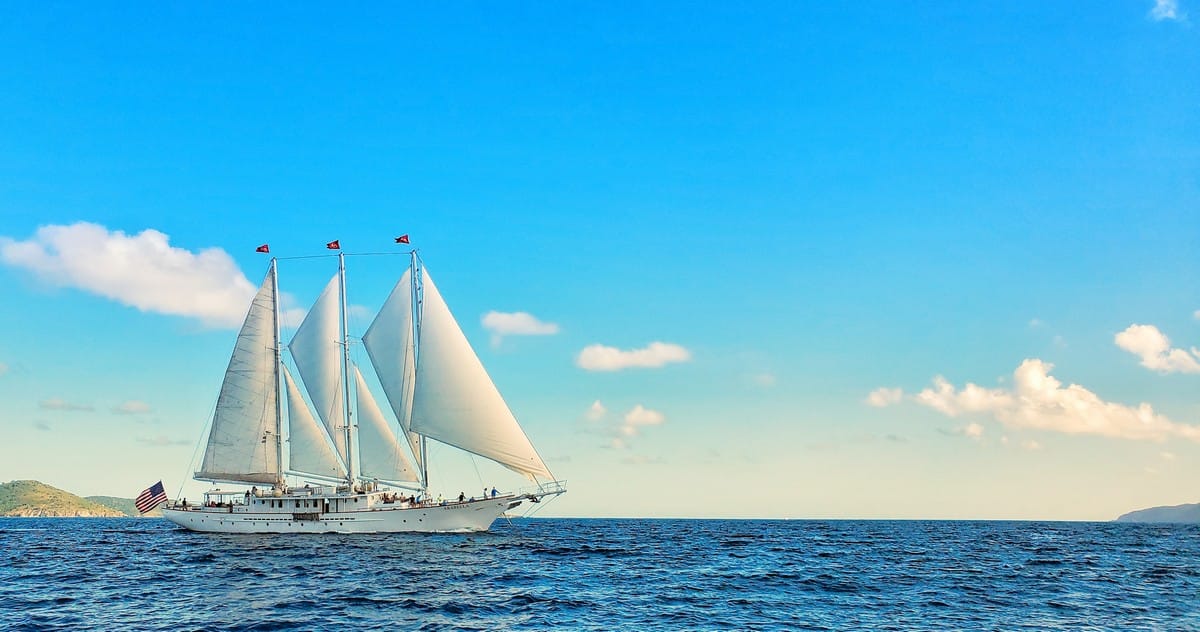 UPDATE: A year ago we sailed the British Virgin Islands with ASA members aboard Sailing Yacht Arabella. ASA has a charter partnership agreement with the Manhattan Yacht Club that allows our members and guests to experience sailing aboard this majestic vessel. For obvious reasons, we can’ be on her today but soon we will all be back on her deck, smiling and sailing!

We are announcing a 2021 date for a Grand Tour of New England aboard Arabella. Join ASA members as we visit Nantucket, Martha’s Vineyard, and Cuttyhunk during Labor Day weekend.

See highlights from the 2019 Grand Tour of New England

A group of ASA members sat in the warm, calm waters of North Sound. In the shadow of Virgin Gorda, they wished for beers to quench their thirst.  Like magic, it happened. A call to Arabella and soon enough, a dive bag filled with ice-cold Carib Lagers showed up.

The crew on Arabella knows how to make everything right.

It is a simple formula. Smiles. Sunshine. Patience. Good wind. Paradise reveals itself.

Spend any time on a sailboat and it is hard not to fall in love. You might fall in love with the sound of the wind as it moves past your ear. You can fall in love with the look of an expertly trimmed sail. Love can be found in the feeling of gliding through the water under full sail. Sunlight glistening off the ripples on the ocean is as attractive as anything you may have had a teenage crush on.

When you are on Arabella, you lose control of your emotions when you see her. From afar, her three masts seem powerful but graceful.  The decks beckon you to wander. The Arabella crew makes you so comfortable you wonder why you don’t have more friends like them.

Standing at the bow of Arabella a splash of the Caribbean comes up and over you and in an instant your mind is reset. If you have ever been surprised by the ocean you know the feeling. You giggle. You smile. You clean your sunglasses only to find that your shirt is soaked through.

The American Sailing Association is treating its members to charters on the 157-foot three-masted mega sailing yacht and the reviews have been incredible.

The Trip Aboard Arabella

The ASA passengers slowly begin to amass at the bar and by the time the sun sets the roar of laughter and good times overtakes these new friends. On this particular trip, 32 people from various parts of the world have joined the voyage with a common thread of being ASA members and sailors.  By the time the trip ends the inside jokes will be plentiful, the lifelong friendships will be catalyzed and the tall tales from seven days sharing beaches and cocktails will be told ad nauseam.

The group boards Arabella and gets a taste of what is in store for them in the coming week and prepares for a 9 am sail to Scrub Island.

Your journey to Scrub Island from Soper’s Hole is with all eight sails up and flying high. The wind propels Arabella toward the afternoon destination. It will be surprising, but this majestic lady sails with class and elegance. She heels enough to remind you that you are on a sailing vessel while remaining comfortable for strolling the deck. She slices through the Caribbean Sea with ease and the boat is quickly up to 10 knots. This first day of sailing has everybody out on the deck admiring the ship, enjoying the sun and taking it all in.

If there is a definitive spot to begin a Caribbean vacation that is guaranteed to help you slip into island time, it is the One Shoe Beach Bar at North Beach at the Scrub Island Resort. Unlike some of the beach bars that you will inevitably visit, this spot gives new meaning to a lazy afternoon day at the beach. The drinks are exceptionally strong and the food is simply the Caribbean. Order the cracked conch and a Carib and your vacation precedent is set. Dip your toes in the water in between cocktails with names like Mystic Coast and Turquoise Sands. Dinner will be a fantastic Chicken Roti at the resort restaurant, but it is almost an afterthought after your beach day and your first day on Arabella.

You’ll spend two days at anchor in North Sound with a few visits to Leverick Bay Resort and Marina.  You will get a taste of what the galley is cooking up as dinner aboard the boat while at anchor is only improved upon by the late-night dancing with new friends. Your full day on Virgin Gorda allows for exploring the Baths, lunch high above the islands at Hog Heaven and a large raucous dinner at Leverick Bay. Some will snorkel in the nearby crystal clear waters and plenty of guests will be dancing under the stars on a nearby beach.

The Baths at Virgin Gorda can be impressive when they are not bombarded with tourists. The secret is to keep left on the trails and go away from the crowds. These quiet beaches opposite of the main attraction may have fewer people even when most of the site is crowded. The tip is to get to the Baths as early as possible.

The crew was able to deliver the guests to the Baths early in the morning. A 9 am arrival to the Baths means that the pools are free of the crowds. If there is a spot in the Caribbean that demands a selfie, it is at the Baths on Virgin Gorda.

Any place that has a rum bar should be on your must-see list while visiting the British Virgin Islands. The snorkeling nearby is impressive and a beach that has tables in the water to keep your drinks from the seawater is about as Caribbean as you can get. The group took turns snorkeling as one of the crew hovered nearby in a dinghy. The sun worshippers populated the beach. The quaint, boutique Cooper Island Beach Club is perfect for an afternoon off the boat. The rum bar boasts the largest rum collection in the Caribbean, 280 rum choices just waiting for you to spend an afternoon with them.

Jost Van Dyke
The anticipation to hit the beach was never this high at any other point of the voyage. With beach bars like Foxy’s and the Soggy Dollar Bar waiting, this group of 30 sailors was champing at the bit to get going.

A voyage like this trip on Arabella brings together a small group of like-minded people and when that happens it is a recipe for pure enjoyment. Nonstop dancing on the back deck, raucous laughter from the off-color jokes and wading in knee-deep water build the bonds of friendship between the guests.

An afternoon on White Bay on Jost Van Dyke is a memory that these ASA members will not soon forget.

White Bay on Jost Van Dyke became a focal point of this sailing adventure. Most of the guests on this voyage took the afternoon to sit in the sun and share in sampling the local beach cocktails.

After a week of sun and sand and sailing and smiling the last day on Norman Island cemented the relationships on the yacht. The dancing went deep into the evening but the long day on the beach followed by dinner at Willy-T and drinks at Pirate Bight capped off an unforgettable sailing adventure.

Do you want to head out on a sailing adventure on Arabella? Take a look at our upcoming voyages. ASA.com/Arabella