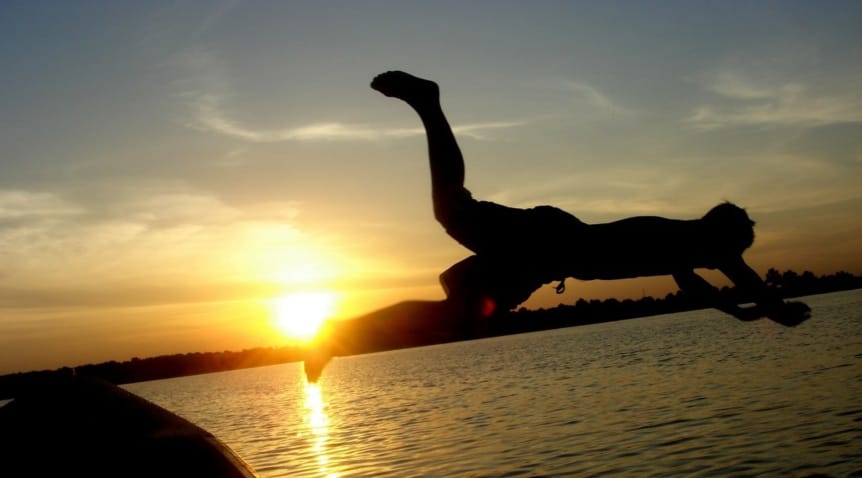 Should You Know How to Swim to Learn to Sail?

For sailors who grew up perpetually wet from ages 5 to 25, having fun righting capsized dinghies, less fun while righting turtled ones, and trapeze sailing small boats competitively in school and college, this question might seem to be axiomatic. Yet, there have been some very accomplished sailing skippers who cannot swim. Three-time America’s Cup winner, two-time Star Class World Champion, and Olympic Bronze Medalist Tempest Class sailor Dennis Conner cannot swim. British Royal Navy explorer, navigator, and cartographer Captain James Cook, who sailed thousands of miles across uncharted areas of the globe with physical courage and ability to lead men in adverse conditions, could not swim. On the other hand, Christopher Columbus once jumped from a burning ship during a sea battle and helped men swim several miles to the Portuguese shore. Columbus believed swimming to be one of the basic competencies of seamanship. Five centuries later, U.S. Naval Officer Lt. John Kennedy performed a similar feat in the South Pacific.

Traditionally, most sailors through the 19th century couldn’t swim. The British Royal Navy preferred it that way because men who could not swim had more incentive to remain on board and keep the ship afloat. Life vests of that era were also discouraged because a square-rigged ship sailing downwind wasn’t coming back to find an overboard sailor in the frigid waters of the North Atlantic. So, why prolong the inevitable? Closer to shore, life vests were denied to prevent non-swimming sailors, some of whom were conscripted from city jails, from escaping their imprisonment.

But what about ASA Instructors or skippers? Flight instructors cannot fly in the air, so why should sailing instructors be able to swim in the water? The whole point of the boat is so you don’t have to swim, right? If it were possible for humans to fly, flight instructors would. An ASA Instructor’s students are going to assume that s/he can swim. If they discover that their Instructor cannot swim, they will feel compelled to watch over you because they are depending upon you to return them back to shore. That is something they should not have to do. Unlike Conners and Cook, both of whom had competent crew to assist or take over, everyone onboard may need you.

There are two occasions when knowing how to swim will increase the odds of avoiding a bad accident. The first is if you fall overboard before teaching your crew how to come about and stop the boat by heaving to. The second is if one of your crew falls overboard and s/he is unconscious, perhaps head down in the water. You or someone will have to go get him or her. Whoever does take the plunge should wear a line tethered to the boat to avoid exacerbating the situation.

There are many other things that a skipper can do if s/he is a good swimmer. S/he can go overboard to remove a line from the prop. In warmer climes with clearer waters, s/he can dive down to check the set of the anchor, reset it, or unsnag it. In places like the Little Bahama Bank of Grand Bahama and Great Abaco, one can anchor in twelve or fifteen feet of water, jump in, return with conch shells from the seabed, and make fresh conch chowder! Swimming from a boat is also the best way to visit a beach, isolated or not. Swim to shore, lie on the sand, swim back aboard. No sand in the boat, no sand in your clothes. And how about just diving in to cool off on a hot day?

How many among us are not strong swimmers? Probably more than the physical mechanics of being a good swimmer is the shipboard confidence that comes from that knowledge.