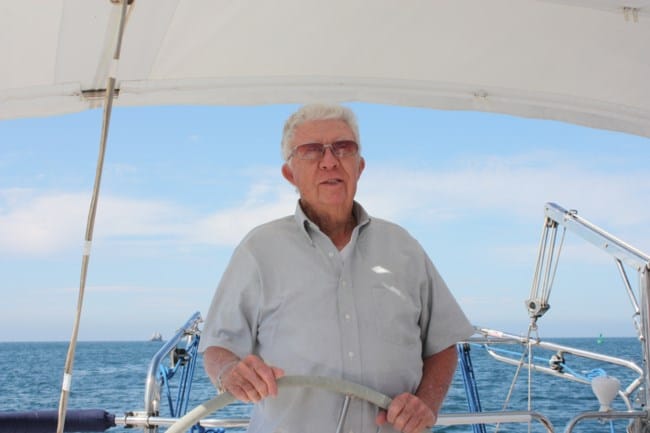 The sailing world has lost an icon. Frank Willis Butler, President and Chief Executive Officer of Catalina Yachts, passed away on 15 Nov 2020 at age 92 in Westlake Village, CA. Frank founded Catalina Yachts in North Hollywood, CA, in 1969. Now headquartered in Largo, FL, but with offices still in Woodland Hills, CA, Catalina Yachts has grown to become the largest manufacturer of production fiberglass sailboats in the United States, floating more than 85,000 yachts to date. In his lifetime, Frank Butler has introduced hundreds of thousands of people to the sport of sailing.

Born in Glendale, CA, in 1928, Frank began his career in the U.S. Navy and then went to college in 1948, but it wasn’t for him. Instead, he opened his own machine shop called Wesco Tool where he enjoyed great success making airplane parts. In 1949, Frank met and married his wife of 71 years, Jean, and started a family that would eventually lead to seven children. Frank’s career as a sailor began in the late 1950s on dinghies. As his family grew, he needed a bigger boat! In 1959, Frank contracted with Henry McCune Shipbuilders to build a Victory 21 sloop, designed by naval architect Ted Carpenter. McCune ran out of funds so he gave Frank the tooling to continue building his boat by himself. By 1962, Frank had built 126 Victory 21s that led to founding his next company, Wesco Marine, in 1964.

In 1966, Frank changed Wesco Marine into Coronado Yachts and built the Coronado 25. This was Frank Butler’s first notable boat design, incorporating his knowledge from his work in the airplane industry at Wesco Tool. In 1967, Frank purchased Columbia Yachts and then sold Coronado Yachts in 1968. Finally, after its founding in 1969, Catalina Yachts shifted all manufacturing rights out of Wesco Marine, which still exists today as a supplier of rigging hardware for Catalina Yachts. Once at Catalina, the Victory 21 was rebranded as the Catalina Capri 21 Victory. By 1977, Frank had designed and manufactured the Catalina 25, Catalina 27, and Catalina 30. In 1978, along came the Catalina 38, based on molds for a Sparkman and Stephens tumblehome racing design from the bankrupt Yankee Yacht Company. Later, in 1984, Frank expanded Catalina’s manufacturing capabilities by acquiring Morgan Yachts. Frank insisted upon continuing to use the company’s brand name for his Catalina Morgan 440 introduced in 2004.

In 1989, Frank helped to transform the Congressional Cup in Long Beach, CA into one of the world’s premiere sailing competitions by designing, building, and donating eleven Catalina 37 yachts to the Long Beach Yacht Club for their annual Congressional Cup match race. The Catalina 37s, specifically built for match racing, have been sailed in every Congressional Cup since 1990. Most recently, Frank acquired the tooling and manufacturing rights to build the True North line of Downeast Maine-style powerboats. The redesigned True North 34 was just introduced at the Miami International Boat Show in Feb 2020.

At Catalina Yachts, Frank Butler brought to market good quality boats at reasonable prices that were intended for all sailboat enthusiasts to enjoy. He was the kind of man who, if he boarded your yacht at a Catalina Rendezvous and found a 10-year-old deck brace missing, would ask you if he could install a replacement at his expense. He was the kind of man who, if he noticed at haul-out that your Catalina 42 had bottom blisters, would arrange to have the entire bottom redone with vinyl ester, no questions asked. Catalina owner Arthur Ciancio writes it best, “Frank Butler was a straight-up honorable man who took pride in what he made. He’s an inspiration to everyone and we miss him”.