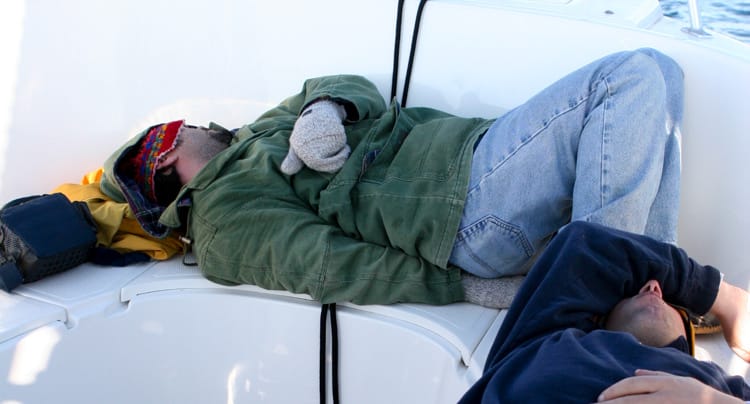 It’s always sad when a person who is clearly excited as we pull from the dock, starts to turn an unhealthy shade of yellow as the first ocean swells make their presence felt. We pretend not to notice, because talking about it only makes it worse for the poor soul, but our formally gregarious guest has now fallen quiet – eyes glued to the horizon because they read somewhere that will help. They don’t want to spoil anyone else’s day but they will be vomiting in front of their friends in about, ummm, 20-minutes. It’s fine and even a little funny to talk about it later, but seasickness is horrible. It defines misery and can be dangerous if it incapacitates at the wrong time.

It’s not completely clear why some people are amazingly unaffected and others so sensitive but many doctors feel that diet, particularly hydration is a key component to not becoming sick onboard.

“What’s happening is that the brain is receiving a lot of information that it can’t resolve,” said Michael Mellman a doctor of Internal Medicine and avid sailor. There’s an overwhelming amount of sensory input to the brain that tries to keep us upright. What the eyes see is motion and the horizon and then there’s a balance center in the ears that tells the head its position relative to the body. There is also the sensation of the bottom of the feet that tells the brain what type of surface you’re on and what it’s doing and whether it’s moving or not.”

The good doctor recommends that if possible, let the “patient” take the helm, for that often times refocuses the brain on something other than the misery they are feeling. Some believe that this action tends to override all the other input.

Of course medications like Dramamine are effective for many sailors but it’s important to remember to take the pill(s) long before heading out. For those who have never taken the drug, the doctor recommends trying one on a day when they’re not getting on a boat, to ensure all is well. Another thing to pay attention to is if the sick person happens to be wearing bifocals or progressive lenses – this focus switching can sometimes wreak havoc on the unsuspecting passenger.

Seasickness is a bummer to be sure, but with the proper preparations and/or medications it doesn’t have to enter into a great day of sailing.

Here’s some tips to avoid the dreaded plague!