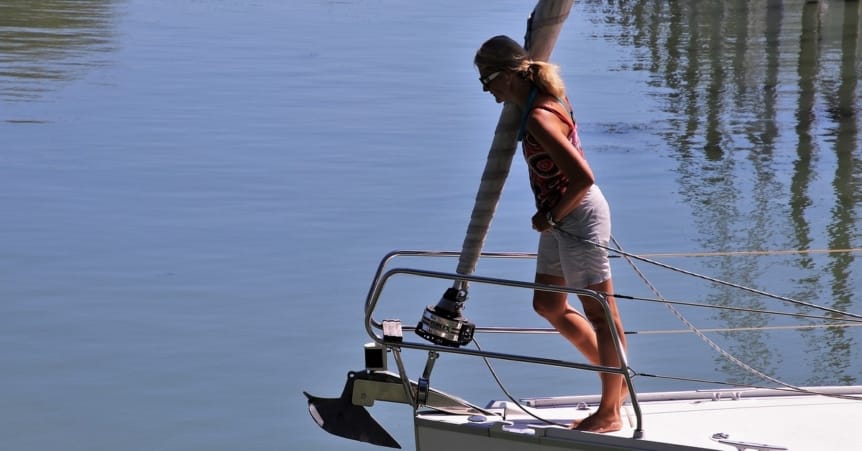 When women sailors are together, the number one question they ask is, how do I get on a safe boat? We talk about safety a lot in sailing, and part of this question is about safety at sea. Is the boat reliable, does the captain know how to sail well, is the equipment and rigging up to date? Women have another layer to this question that is interpersonal. Since the majority of boats are still owned by men, many women are crew. While most men in sailing are stand up guys with good intentions, they often inadvertently say and do sexist things when around women that keep us away from the sport or unknowingly encourage us to drop out.

While sexism has always been a major part of sailing for women, we now have better numbers to highlight the issue. In the 2019 World Sailing Trust Women’s Strategic Review Report, 85% of women had experienced discrimination in sailing. Four categories were identified as main problem areas: isolation, slights, bias of incompetency, and harassment. I am going to outline a few common examples of these with the hope it will help facilitate long-overdue self-reflection in our male-dominated sailing communities. Ultimately sexism and discrimination against women is an issue men need to course correct. This may seem obvious because the behavior mostly comes from men, but it is also because when women try to advocate we are often criticized and put in a double bind. If men started holding one another accountable, we would see faster change.

For the most part, all of this is pretty unintentional and ingrained biased behavior from men. Just because someone didn’t mean to be sexist, it does not take away from the impact it has. Men still need to take accountability for their actions. The key is to create awareness and communication when this behavior shows up.

If you reflect on these examples, you will recognize them in yourself and sailing communities. If you intentionally focus on awareness of these themes, you will see them happen often. Being able to recognize and name sexism when it happens helps shift the culture and creates safety for women. Don’t leave the burden of naming it on women. It puts us in a damned if you do, damned if you don’t scenario. We either say something and are seen as being too sensitive, or too aggressive, or we say nothing and it seems like we are condoning. We need men to call themselves and each other out when these behaviors happen. There are many creative ways to confront discrimination: “Hey man, that was sexist,” “I’m pretty sure she knows how to do that or will ask if she doesn’t,” “Dude, ask her about that amazing gybe at the mark,” and “I heard her make that suggestion first.”

I was on another J105 with a mixed crew. We liked to joke about it when sexist habits showed up. The male skipper was aware enough to know women had these experiences. He was open to being called out so he could be accountable and change his behavior. One day he explained something extremely rudimentary to me. He caught himself in the off-handed remark and we both stopped and looked at one another. I started to laugh and said, “Thanks for that, did you know this is called a sailboat? Did you know it’s powered by wind?” We started going back and forth with ridiculous suggestions and advice to exaggerate and diffuse the situation. He laughed and said, “Ya, that was pretty lame. Sorry, Jenn.” I loved sailing with this skipper because of the willingness to discuss interpersonal issues aboard and do better. We performed better because of it too.

How Can You Be Proactive About Being Inclusive?

As we all know, safety is ultimately up to the skipper, and it is their role to set the tone for interpersonal dynamics. Psychological safety, or the ability to question, confront, take risks, have new ideas, and make mistakes without any negative repercussions to your character, status, or role, is critical to innovation and growth on teams. Skippers who invite this kind of safety on board will have an advantage in performance. It will enhance teamwork and build team cohesion. Creating interpersonal and psychological safety in our communities will bring in more diversity and grow the sport, which is good for all of us on the water.

Jenn Harkness, aka, Skipper Jenn, is a human being, artist, coach, therapist, writer, friend, mermaid, student of life and lover of all shine and sparkle. She is also Editor-in-Chief of the Women Who Sail Newsletter. May we all sail in peace.