Ah, the sextant… that odd magical contraption that sleeps in an aged wooden box and stored in a seldom-used locker. Every once in a while you break it out and it’s glorious to behold – there’s poetry in its very existence. You look at the curves and the shiny mirrors, then you spin the dials – they feel substantial and real. You gaze at the increment markers and numbers and hold it in your hand just as Captain Cook’s navigator did with something oh so similar. As you feel the weight of this incredible innovative invention you mutter, “I wish I knew how to use this damn thing…” And you put it back into the really cool wooden box.

It’s okay; you’re not alone in any of these emotions. It really is an amazing tool and so many of us would like to have a better understanding of it. It’s in all the magazines and books – “don’t rely solely on battery operated modern electronics. They will fail or you will run out of batteries.” It’s so true and you know it, but this thing looks like a puzzle that you don’t have the time or inclination to figure out. Maybe so, but let’s talk about it anyway.

What is undeniable about the sextant is its timelessness. The first sextant was produced by John Bird in 1759 and it is not tremendously different than one you would buy today and is every bit as useful. And if you are a long-range cruiser, it really is an important piece of equipment to keep at the ready. As complicated as it looks, the concepts it employs are relatively basic. As most know, the theory revolves around the consistent behavior of the sun and stars in relation to the very fixed nature of the horizon.  Celestial navigation, as it is known, has been at the core of ocean navigation for thousands of years.  It’s believed that as early as 1200 B.C. sailors and mariners were figuring out their direction by looking to the sky and doing a bit of math. 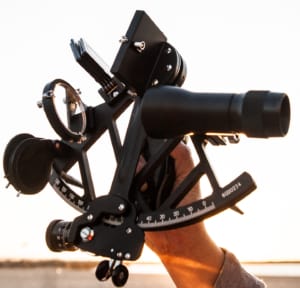 Without going into the actual math formulas that are involved, it’s fair to say that those with tendencies and talents towards arithmetic will probably have an easier time picking it up, but it isn’t overwhelming.  It requires the use of a nautical almanac, the numbers gathered from the sextant sighting and a clock to provide some numbers, but it’s a simple formula: For example it may be something like: Latitude equals a particular distance minus another number (that’s found in the almanac). That’s really broad-stroking it but the point is, at its basics, it’s a process of gathering a small amount of pertinent numbers, then doing some adding and subtracting producing information that will keep you on track and rolling in the right direction. Although there is a good amount to know when it comes to celestial navigation, they say if you can just master taking noon sights, you can navigate across an ocean.

While there may be some who believe celestial navigation is some antiquated esoteric process for sailing geeks that have too much time on their hands, the truth is this skill is something that has true practical applications. Finding all of your electronic navigation equipment just got toasted or flooded-out for one reason or another is a sinking feeling if you are out of sight of land or hundreds of miles off shore. The security of knowing that should something like that happen, you can just open up that locker, grab that old wooden box, pull out the crazy contraption and find your way to land the way they’ve done for centuries is well worth the trouble of learning how.