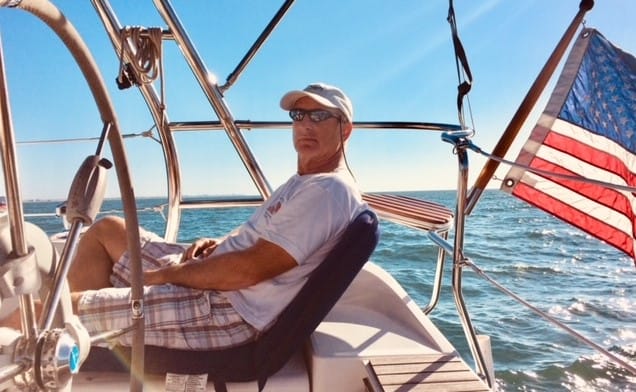 Sailing Florida is located in St. Petersburg Florida and offers sailing instruction as well as sailing charter options on their fleet of catamarans and monohulls. Their goal is to get people out on the water in a more economical way and making sailing more accessible to everyone. Captain Rick Johnson of Sailing Florida explains his love for sailing and sailing instruction as this month’s featured instructor.  You’ll get a sense of his sailing style and his love for sailing. Sailing Florida can help you melt away the stress, disconnect and feel the wind.

My very first time on a sailboat was actually quite unplanned. I had grown up around boats and lakes, but they were always power boats, and water skiing was always part of the deal. When my wife and I were living in Houston, Texas, we found ourselves with no plans for an upcoming weekend. Since it wasn’t football season, and I had no desire to experience yet another museum, I searched Google for “things to do around Houston”. Up popped “take a 2 day sailing class”. Well this happened to be an ASA 101 class, so we figured let’s give it a try, if we don’t like it…..well its only 2 days. Needless to say, I was bit by the bug by the end of the first day! It just amazed me how self-sufficient and at peace one can be when given the proper training on how to sail the boat.

I recall I one time when I had four young gentlemen who were good friends in a Basic Coastal Cruising class. We had just finished anchoring drills and were reviewing troubleshooting techniques such as running aground and fouled propellers while motoring back to the marina to take the written test. No sooner had we completed the discussion than a crab pot line got wrapped around our propeller and shaft. Well, the marina was only 1/2 mile away so we decided we would just sail in and address the fouled prop after docking. Well of course the wind was blowing directly from the marina so we had to tack our way in, and during that exercise, ran aground on the edge of the channel at the marina entrance. Well at that point, one of the gentlemen concluded it was such shallow water, it would be simple to duck under the boat and clear the prop. He had just finished and re-boarded when a large motor yacht went by and raised us off the bottom in its wake. We motored right on in as if it was just another perfect day of sailing. To see the look of accomplishment on those gentlemen’s faces of actually solving those two problems in the space of 30 minutes is a memory I will never forget.

Well, it’s really difficult to pick just one, but if I had to it would be pretty much anywhere in the Windward Islands of the Caribbean. I still consider it somewhat off the beaten path when it comes to cruising, especially compared to say the BVIs. I love the slower pace of these islands’ peoples, their friendly optimistic attitudes, and of course those constant Caribbean winds and the warm crystal clear blue waters.

It amazes me how much one can really relax when under sail. Nothing can truly release stress for me better than just several hours of watching the waves go past the hull. One of the things I find we have lost in this age of technology is how to really truly relax. To get to that place, where your mind stops racing about all the things that need to be done and just goes “blank”. That place where there is absolutely no weight on your shoulders, or stress on your brow. Sailing allows me to always go to that place.

Most people who have never tried sailing seem to have the impression that it is very complicated and requires a lot of strength and athletic ability. Once they are taught what each of the individual lines accomplishes on a boat, and the correct way to use them, they quickly realize that it is in fact not complicated at all, nor does it require any special strength or athleticism. I compare it to learning a foreign language, once you know it, speaking it is simple. 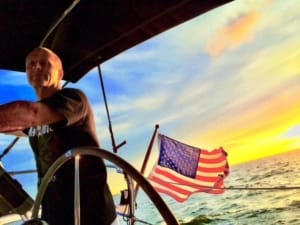 “Sailing is one of those pursuits that allow people to learn for a lifetime. While one can become proficient, there is always another surprise or challenge waiting over the next wave. The feeling of accomplishment and total peace when out on the open water is unparalleled. It always gives me a chance to clear my mind and find a fresh focus and balanced perspective on life’s priorities.” -Captain Rick Johnson