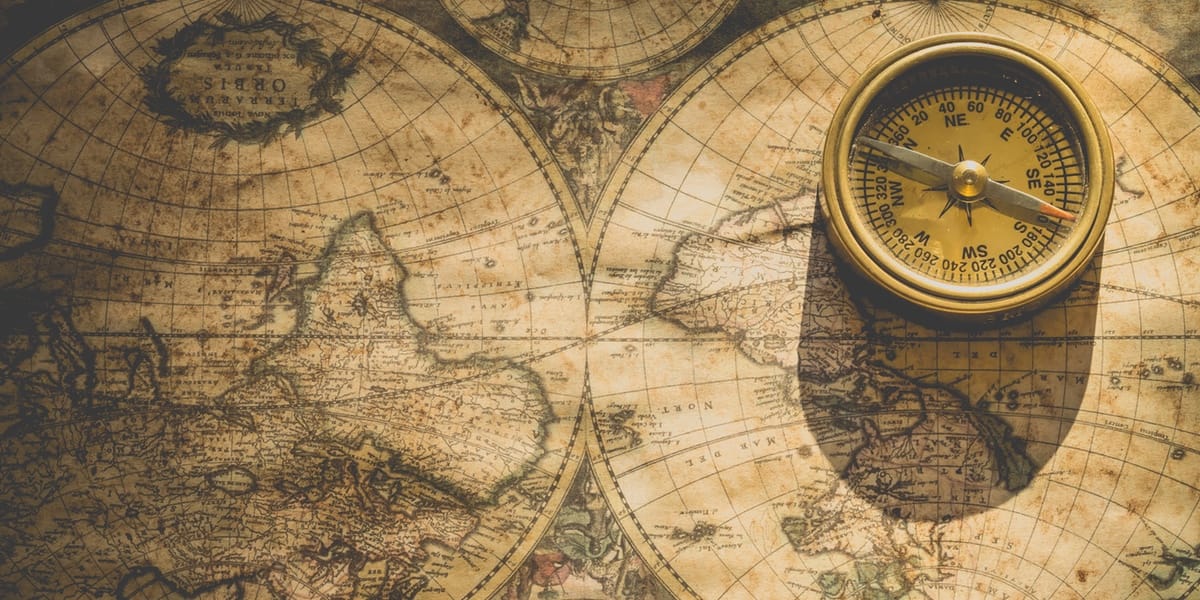 In 2018, the Earth’s Magnetic North Pole – a wandering location where lines of magnetic force enter the Earth perpendicularly – passed closer to the Geographic North Pole than at any other time in its recorded history.

English philosopher William Gilbert first calculated its existence in 1590 (published in 1600). Since then, through 1831, when British Naval Officer James Clark Ross became the first to reach it physically, and up until 1898, the Magnetic North Pole has meandered aimlessly through the islands and waterways of northern Canada. But since 1898, it has been moving steadily north-northwestward. At the beginning of the 20th century, it advanced about 5 miles each year. Then in 1970, it began to move faster. Today, the Magnetic North Pole moves about 25 miles each year. Soon, it will be at 86.471 degrees N Latitude and 178.755 degrees W Longitude, a distance less than 212 nautical miles away from the Geographic North Pole. In 2019, the Magnetic North Pole crossed the International Date Line, into the eastern hemisphere, and falling away from True North toward Siberia. 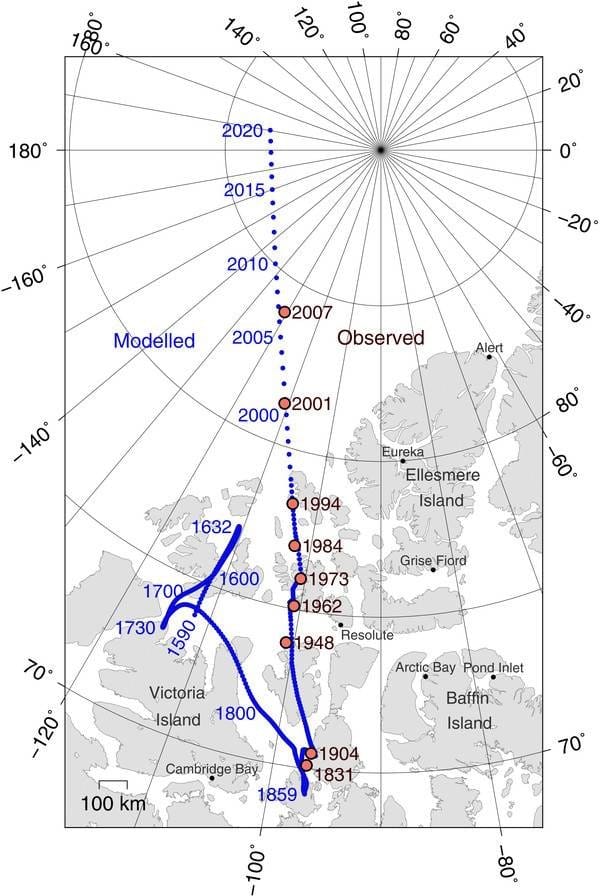 The reason we, as mariners and navigators, are interested in this is because of magnetic variation and its effect upon our ship’s compass. Variation, the “V” in “add East < T | V | M | D | C > add West”, is a force outside our ship, stemming from our position on the Earth’s surface. It is the angular difference between our geographic and magnetic meridians, expressed in degrees East or West. More simply, it is the difference in degrees between what our compass “feels” as Magnetic North versus True North. For sailors on the East Coast of the United States, the variation in the compass roses on nautical charts is West. On the West Coast, variation is East. For sailors on western Lake Superior and along the Gulf Coast off lower Alabama, there is no variation. Boats on these waters are on an agonic line where Magnetic North and True North just happen to line up on the same geographic meridian. 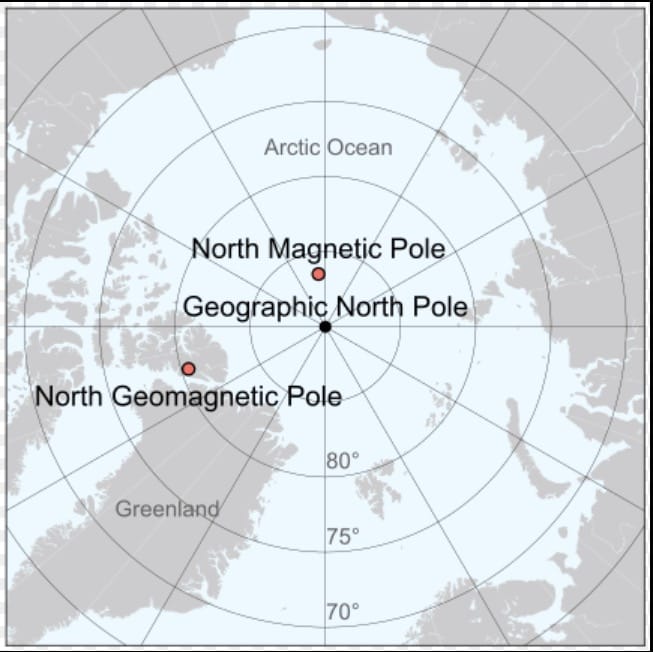 First, the Geographic North Pole. This is True North, the northernmost point of the Earth as determined by the northern tip of its imaginary rotational axis. It is a mostly fixed point, subject to only thirty feet of wobble every 433 days. This is the top of the world, 90 degrees North Latitude. All the great circle meridian lines of longitude converge here, as do all of the world time zones. Standing (or floating) at this spot, North, East, and West no longer exist! The only way that explorers who vanquish these three compass cardinal points can leave the Geographic North Pole is to step South. It does not matter which way to step, because in every direction, the only direction is South.

Next, the Magnetic North Pole. The northern end of a magnetized compass needle frequently points here. It is not located at the Geographic North Pole, but it’s close enough to be useful in navigation. The reason it moves about 25 miles each year is due to earthquakes, electrical fluctuations in the Van Allen radiation belts, the ionosphere, and the magnetosphere, but it is mostly due to our planet’s internal physical structure. Earth’s magnetic field originates in its core. The inner core is probably solid iron. Surrounding the solid inner core is a molten outer core of liquid metal alloys – mostly iron and nickel – that lies about 1900 miles beneath our feet. Next out is the mantle which is solid but malleable, and then what we see every day, land and sea, is the crust. As the Earth rotates on its axis, the inner and outer cores rotate too, but each at a different rate, which creates a geo-dynamo effect. Immense heat from the inner core, hotter than the surface of the sun, caused by radioactive decay and the conversion of potential energy in heavy metals sinking down to the inner core, drives the motion of the liquid metals in the outer core. Convection currents of moving molten metals generate electrical currents that produce the Earth’s magnetic field. And because the source of the Earth’s magnetic field is moving, the Magnetic North and South Poles move as well. If the Earth’s magnetic field were generated by a large, powerful, solid, dipole (two poles), bar magnet within the solid inner core, instead of by moving molten metal alloys in the liquid outer core, the Magnetic North and South Poles would remain mostly static.

Last, the Geomagnetic North Pole. The electrical currents created by the convection currents of moving molten metals that generate Earth’s magnetic field are not evenly distributed throughout the liquid outer core. Due to this, the strength of Earth’s magnetic field varies from place to place underground. It is also the reason that the Magnetic North and South Poles are not antipodal, meaning that the imaginary line connecting the two does not pass straight through the center of the Earth. All of these factors combine in such ways that the parts of the Earth’s magnetic field that emerge from the bottom of the world that are not perpendicular, do not also emerge at the Magnetic South Pole as the perpendicular lines of force do. Instead, the spot where they do emerge, at the South Geomagnetic Pole, and the spot where they re-enter the planet, at the North Geomagnetic Pole, are derived mathematically as a best fit for the imaginary ends of a solid, dipolar, bar magnet that account for the properties of the Earth’s magnetic field, both on the surface and around the planet.

Once up out of the ground and above the Earth, the magnetic lines of force from the Geomagnetic South Pole, even out more uniformly. They are not perpendicular nor even all that vertical. Extending out into space, they curve northward to surround and protect the Earth from the solar wind as the magnetosphere, the northern part of which glows in the solar wind as the Northern Lights of the Aurora Borealis. North of the Arctic Circle, they curve downward once again and re-enter the Earth as the Geomagnetic North Pole, located on Ellesmere Island in Canada, northwest of Greenland, to form closed loops of magnetic force. The Geomagnetic North Pole also moves around from year to year, not as much as the Magnetic North Pole, but for the same reasons. 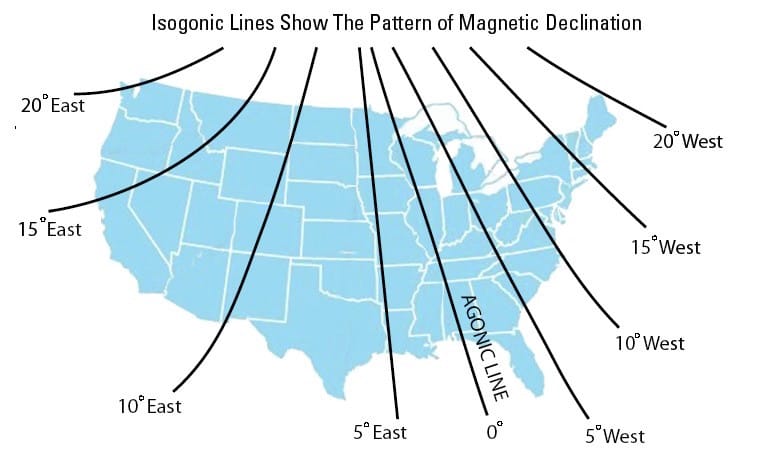