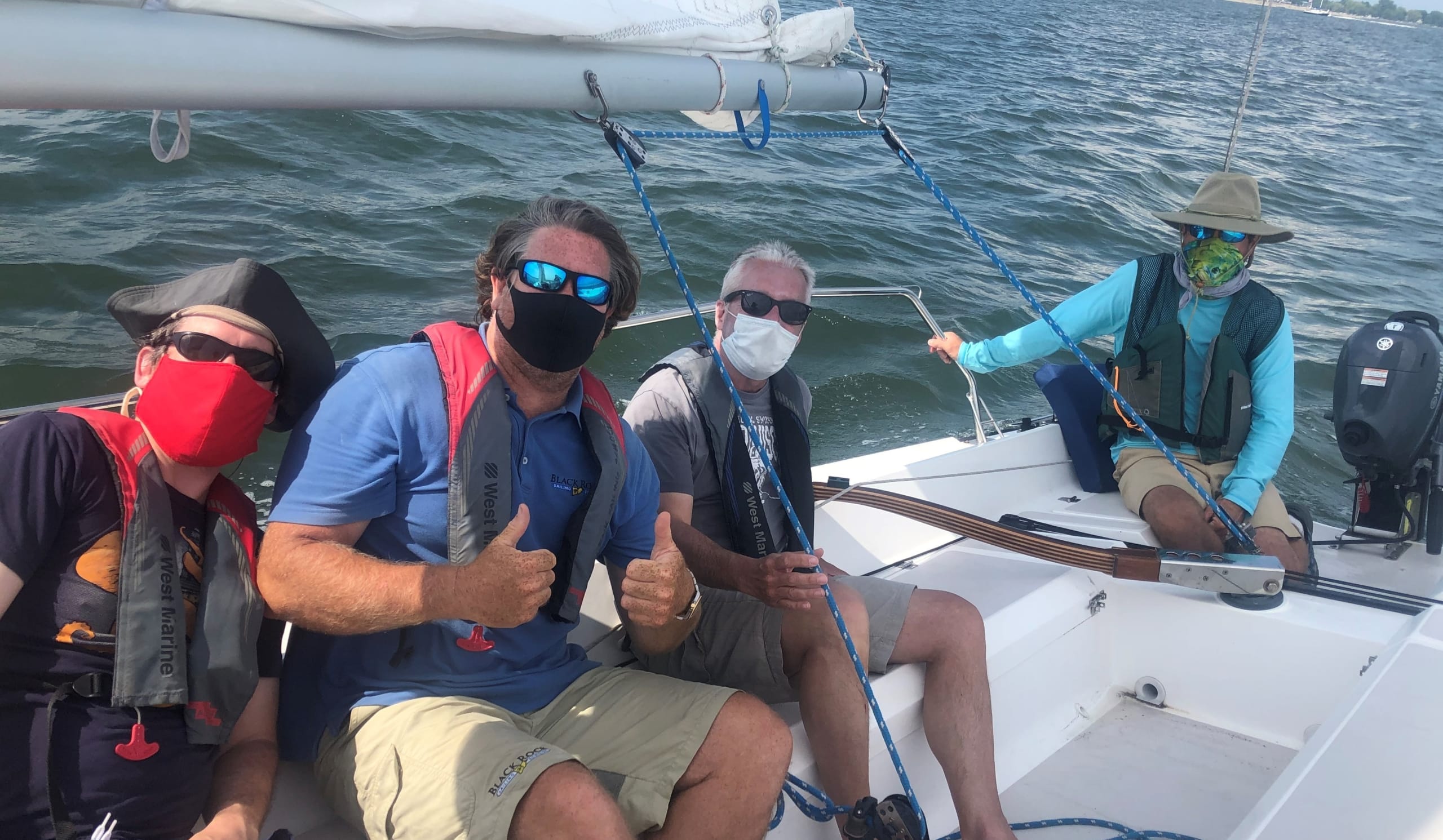 As the COVID -19 restrictions have begun to slowly be lifted sailing schools have been able to start their summer sailing seasons. ASA had Caribbean Travel Writer, Bob Curley, participate in ASA 101 with Black Rock Sailing in Rhode Island as restrictions were lifted.  Students wore masks in the classroom and on the boat. Social distancing was practiced (where possible) while taking the course.

If I only remember one thing from my introduction to sailing class with Black Rock Sailing School, it’s this: “Flappy sails are unhappy sails.”

Black Rock Sailing co-owner and instructor Brenton Lochridge is full of such memorable catchphrases (“Up and in, down and out” for sail-trimming rules, “cheese and crackers sailing” for those moments where the wind and sails are doing all the work), which help keep his ASA 101 class lighthearted while still delivering a boatload of information and hands-on instruction to newbie sailors like me.

As a Caribbean travel writer, I’ve been on a lot of sailboats, but rarely have done more than tie off a cleat knot between sipping rum drinks and chilling to reggae as a passenger on pleasure cruises.

However, ASA 101 is not just for beginners: both of my classmates had sailing backgrounds and were looking for a refresher with an eye on moving up to higher-level classes and ultimately reconnecting with a sport they enjoyed during their youth but had drifted away from over time.

“The objective of ASA 101 is to set a rock-solid foundation for students to build upon,” says Lochridge, who encourages graduates of his Boston and Warwick, Rhode Island program to build on the classroom and on-water education by joining a sailing club or renting, chartering, buying, or finding a friend with a boat.

“It is up to the individual sailing school to create a 101 curriculum that will be easy enough for a newbie to process and understand, yet be challenging and interesting enough to keep a pretty experienced sailor engaged,” Lochridge adds. “Students are especially excited to get started, and they will have some of their biggest eureka moments during this initial three-day course. The student’s learning curve is very steep, so it is very fulfilling as an instructor.”

As someone who came to the class barely knowing a jib from a gybe, I’ll confess to coming aboard Black Rock’s class with some trepidation — not just at the prospect of possibly sailing a boat into a dock or other fixed object, but also about my ability to absorb the basic book-learning of sailing during an intensive three-day class after way too many years of being out of any kind of school.

“I’m going to brainwash you,” assured Lochridge during the first five minutes of class, also promising that the boat we would be sailing every afternoon, a Colgate 26, was “impossible to capsize.”

Both turned out to be true. Methodically working through everything from the parts of a sailboat and how they work, to the principles of sail, boating rules and safety, wind direction and dynamics, and knot-tying. I learned that it’s OK to be “rail meat,” but that “flying the halyard” was one of only a handful of ways to automatically fail the class.

Fortunately, we never did find out if making Lochridge climb the mast to retrieve a wayward halyard was actually a failing offense, but he did put us to the test regarding situational awareness, suddenly falling silent from his usual step-by-step instruction as I steered the boat in the direction of a multimillion-dollar yacht (yes, I took the unspoken hint and turned away).

Every day we raised sails and prepared the boat to get underway, spent hours on the water sailing up and down wind, learning to tack, gybe, heave-to, grab mooring balls and retrieve floats playing the role of overboard sailors. Spotting red nuns and green cans. And always trying to heed Lochridge’s maxim in those moments when sailing felt a little dangerous or out of control: “When in doubt, let it out” — “it” being the mainsail, of course.

At day’s end, we crew — and that’s how we quickly came to think of ourselves — took turns motoring back into harbor, tying up to the dock, and securely putting the boat to bed for the night. And Lochridge was right about the brainwashing: by day three, not only was I consistently pushing the tiller in the proper direction, but I found myself unconsciously checking the telltales, trimming sail at the first hint of luffing, and eyeing wave-tops for ripples to stay on top of changes in wind direction (“once you learn to see them, you’re set for life,” says Lochridge).

Slowly but surely, my death-grip on the tiller relaxed, I was finding the sweet spot in the heel of the boat as we cruised across Greenwich Bay, and laughing along with the others as we noticed big powerboats motoring past with their bumpers incongruously bouncing on their hulls (amateurs!). I was sailing.

Did I screw up? Constantly, but less as the weekend went on. And it was comforting to see that my more-experienced classmates also had their brain-freeze moments, but learned from their mistakes just like me. “In 10 minutes I learned to gybe better than ever before,” noted my crewmate Thas Cochrane of Franklin, Mass., who grew up boating on the Nevasink River in New Jersey and recently returned to sailing.

I haven’t been back on a sail boat since passing the class, but now I find myself scanning Craigslist for inexpensive day boats in my spare time. I absentmindedly tie hitch knots when I find bits of string laying around the house. And suddenly I’m better at backing my car down the driveway then I’ve ever been in my life.

If one three-day class with Black Rock can transform me from a boat passenger to a wannabe sailor, imagine what it can do for someone who starts off with a love for boats and sailing. “ASA 101 is the gateway into a world of adventure that people have usually been dreaming about for some time,” says Lochridge.

Cochrane, who has also signed up for the ASA 103 and 104 level classes with an eye on buying or leasing a boat and perhaps joining a yacht club, agreed. “This is a very good way to get the foundations of sailing right,” he said.