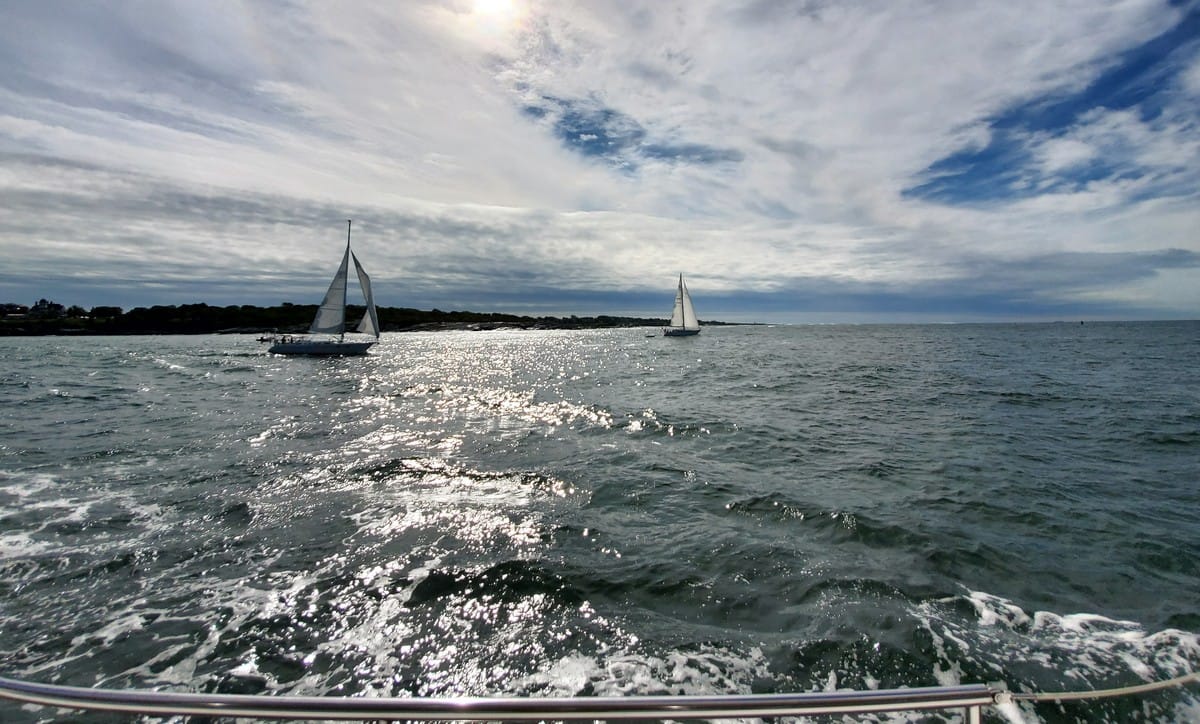 Spend a day in Newport, Rhode Island and you will be drawn to the sailing lifestyle. Black Rock Sailing has offered up a taste of what Rhode Island Sailing is all about.

Rhode Island, the tiniest state in the Union, is known as the Ocean State – as it is blessed with 400 miles of coastline where you will find countless nooks and crannies, and dozens of picturesque New England harbor towns to tuck in and explore.

Narragansett Bay is a world class sailing mecca that is blessed with consistent sea breezes most afternoons and calm cool nights that make for good sleeping aboard.   At the heart of Narragansett Bay, you will find Newport, RI – one of three major sailing hubs along the US East Coast.

It is by no accident that the Volvo Ocean Race (now the Ocean Race) has decided to return to Newport for the third time in a row.  New England boaters flocked to Rhode Island in droves in recent years, making it one of the most successful stopovers in the series.  ASA 104/114 students aboard Black Rock Sailing School’s training catamaran were able to witness the re-start for the final leg across the Atlantic up close and personal – an experience that they will never forget!

Rhode Island has a rich history in boat building and maritime trade.  To this day, some of the best sailing products in the world are built in the state.  The government supports them with all sorts of incentives to attract the best in the industry.

Organized racing exists all over Narragansett Bay.  In beautiful Greenwich Bay, an offshoot in the upper Narragansett Bay that is home to ASA affiliate, Black Rock Sailing School, you will find numerous sailing clubs host sailboat racing every Monday, Tuesday, Wednesday, Thursday, and many Saturdays throughout the summer.  As well as some gorgeous anchorages off of Goddard Memorial State Park and the surrounding sandy coastlines.

On a typical day in Rhode Island, you could sail past numerous traditional schooners carrying tourists, mega-yachts of all shapes and sizes, Navy ships, and lobster and fishing vessels.   You may also be passed by a fleet of historic America’s Cup 12 meters, Volvo Ocean Racers, or the latest high tech foiling sailing craft.

The bay has numerous picturesque bridges – often the backdrop of photos you see online and in sailing magazines.

Beautiful Block Island is a couple hours sail from the mouth of Narragansett Bay – as are other sailing jewels like Buzzard’s Bay and Martha’s Vineyard in nearby Massachusetts.

When Is The Best Time To Sail Rhode Island?

Rhode Island’s sailing season typically starts in late April or early May and runs through October, but as with many places in these latitudes, the peak season is from Memorial Day to Labor Day.  The city of Newport’s population booms from 25K during the winter, to up to 100K in season as folks from around the country come to experience the beauty that the state has to offer.  The rich and famous come to have their weddings here, and many have summer homes throughout the state.

It takes months for the ocean water temperatures to warm, so the BEST months to sail in Rhode Island are September and October when you can enjoy warmer air rising off of the water and excellent seasonal winds!

Generally speaking, all of New England is much more challenging than say, the British Virgin Islands.  Strong currents, dense fog, high winds, rough seas, and unforgiving rocky coasts and rock strewn waters can exist.  A sailor must pay close attention to weather forecasts, as well as tide and current tables.  One must be quite a savvy navigator too!

That said, first time cruisers should feel right at home within Narragansett Bay.  For the most part, you will find sandy or muddy bottoms, making for excellent holding in the many anchorages, and most, if not all coastal towns have transient moorings or marina dockage available.  Apps like Dockwa or Snag-a-Slip make reserving a place to stay quite easy.

The northern half of the bay rarely fogs over as the surrounding land usually heats up and burns the fog off.  The bays protected waters provide calmer conditions overnight and throughout the mornings, and more sporty conditions most afternoons if the sea breeze kicks in for a few hours.

The lower half of the bay, closest to the ocean can have frequent dense fog.  Areas like Newport, Jamestown, Dutch Harbor, and Block Island can be fogged in, at any time, for hours – if not days.  These southern shores consist mostly of granite rocks, and have numerous rock outcroppings, there is a LOT more boat and commercial traffic in these parts, stronger currents, and only more experienced sailors should venture out in these conditions!

Come and experience all that Rhode Island has to offer!  The mostly rural settings have anything from quaint New England homes to massive mansions surrounded by woodlands, grassy fields, and beaches.

Explore Newport’s Mansions and historic harbor, pull into the scenic Kickimuit River anchorage or moor in one of the many quaint harbor towns like Jamestown, Dutch Harbor, Wickford, East Greenwich, and Bristol Harbors.  Sail down the scenic Sakonnet River, and out into the ocean to Cape Cod and the Islands, Block Island, or nearby Long Island Sound.

Rhode Island has so much to offer sailors, and there are three ASA sailing schools located throughout the bay!  Some offer week-long liveaboard courses, as well as day classes.