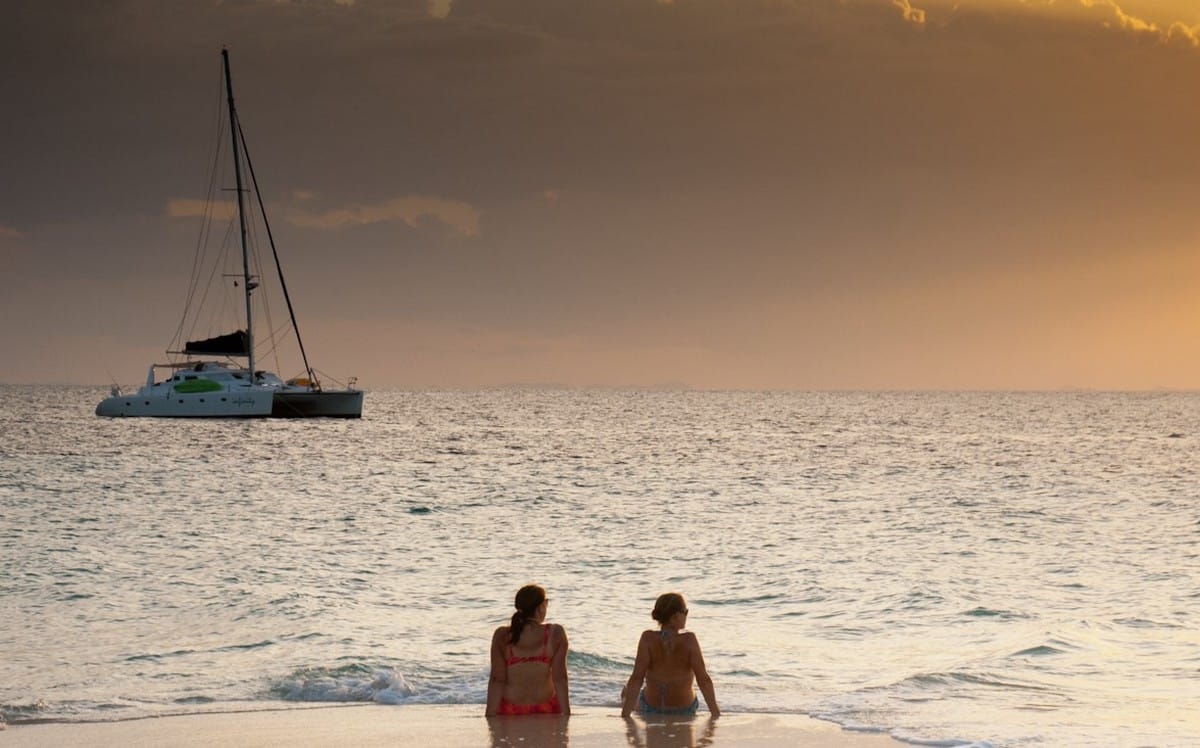 On the shores of the Caribbean Sea and nestled between Mexico and Guatemala, English speaking Belize marries spectacular waters, hundreds of idyllic islands and the 2nd largest barrier reef in the world with a fascinating, culturally rich heritage. Still relatively undiscovered as a sailing destination, anchorages are so quiet you may only see a handful of boats in a more popular location and there are a myriad of islands to explore. The trade winds typically blow in from the east, ensuring the ultimate sailing conditions for sailing north or south.

Go offshore to 3 of the 4 major atolls in the Caribbean and witness some of the most epic snorkeling in the world, or head to a more populated island such as Caye Caulker and walk barefoot on the sand streets to colorful wooden beach bars and dine on the catch of the day. Have time to go inland? Climb grand Mayan temples, canoe downriver through the jungle, tiptoe around Mayan sacrificial offerings (including skeletons!) inside vast cave networks or soothe the muscles in a plunge pool in one of the best boutique resorts in the world.

Things to see in Belize?

Hol Chan Cut has been a marine reserve for 25 years and is the most popular site in the Northern Cayes for snorkelers and novice divers. A natural ‘underwater Disneyland’, the sheer variety of fish that congregate here is mind-blowing. Expect to see schools of blue tang, parrot fish, angel fish, striped grunts, schoolmasters, huge horse eye jacks, southern stingrays, eagle rays, green moray eels, nurse sharks and even tarpon. There is a large grouper that likes to have his picture taken and approaches snorkelers, plus the resident turtles can usually be found.

Caye Caulker is nestled upon a vast underground cave network and a large group of Tarpon have moved into an entrance that connects to the outer reef. These days the sound of an outboard engine is the dinner bell and they are lined up ready for feeding time. Buy a bag of sardines for $2.50 and watch these prehistoric giants jump out of the water; just watch your fingers! Head a few moments south to the Seahorse Sanctuary at Iguana Reef hotel, a natural enclosure of seagrass and nets. The Seahorses are very well camouflaged but there is usually someone on hand to point them out.

Experience the sunset at The Split Bar

Soggy Dollar Bar eat your heart out, the Split Bar in Caye Caulker is located at the tip of the south island next to the ‘split’ between the islands, with amazing swimming, dive platforms, beach games and of course, the best scene for the sunset on the islands (being on the lee side). It is a mecca for sun-kissed back backers, locals and the resident expats, so expect a lively scene.

Manatees, which are also known as sea cows are gentle, slow moving, plant eating herbivores and their closest living relatives are elephants and aardvarks. They can grow over 13 feet in length and weigh up to 3,500 pounds. Despite being an endangered species, Manatees are present in the waters of Belize and can be witnessed throughout the year. A close concentration can be witnessed at
the Swallow Caye Marine Reserve. (Please note it is not possible to swim with the Manatees.)

The Blue Hole at Lighthouse Reef

An incomparable natural wonder, this atoll was once a dry cave but rising sea levels over thousands of years submerged it, causing the dome to collapse, creating a perfectly formed 1,000ft diameter circular hole. The hole is believed to be 430ft deep and at 130ft you can witness the world’s largest known underwater stalactites while nurse sharks circle above you.

The southernmost Atoll, Glovers Reef is a minefield of patch corals and epic marine life, with a scattering of tiny islands that sit on the outer reef. Southwest Caye makes for a great anchorage as there is a huge uninhabited perfect white beach with a backdrop of coconut trees (it was once a plantation) and since it sits on the lee side of the island, there isn’t a spec of ocean debris, just a few fallen coconuts.

Bioluminescence in the Sittee River

Meander up the Sittee River, where the contrast from ocean to jungle and river is breathtaking. It is possible to explore the sleepy seaside village of Hopkins in the afternoon, which has rich cultural routes with the ‘Garifuna’ population. After dark, venture into the Bioluminescent lagoon, which lights up like a cosmic bath of stars as you glide through the waters, a once in a lifetime experience!

This hidden away collection of mangrove islands are surrounded by some of the most impressive coral heads in the country and teem with incredible marine life, making for a great snorkel day. It is also a calm and protected spot for those wanting to paddle board, kayak or do some dinghy fishing. Furthermore, there is a tiny bar hidden away that runs on solar panels and a generator, which makes for a fun pit stop after a day on the water and is, not surprisingly, called ‘Hideaway Caye’, as if you’d blink, you’d miss it.

Once a sleepy fishing village that has grown up to a quaint but elegant little town, Placencia has it all, including miles of sandy beach, a Francis Ford Coppola’s beach resort, a scattering of upscale dining options, some laid back beach bars, early morning yoga, colourful wooden art shops and local wood carvers. Cruisers hang out at “Yoli’s Bar”, always a good spot to share sailing stories.

Belize boasts the largest cave network in Central America and the Mayans considered caves to be the entrance to the underworld. After a brisk mile hike through the jungle spotting wildlife along the way, you plunge into the cool water of the cave mouth. From there you climb, crawl and scramble through dark caverns, discovering Mayan artifacts, drawings and even skeletons over 1,000 years old. With myriad exposed treasures, including around 200 ceramic vessels and the skeletal remains of 14 humans, all believed to be sacrificial victims, it is widely thought that it won’t be long before the ATM is closed to the public.

Grand Mayan cities and splendid temples are scattered throughout most of the country, though only a handful have been excavated and opened for visitors to explore. Xunantunich is reached by a hand-cranked ferry across the Mopan River. The dominant El Castillo central shrine rises to 130ft and is believed to have been occupied as early as 1000BC but was little more than a village.  The larger architecture seen today was built around the 7th century AD when it rose in power.

South Water Caye
A pristine 12-acre private island that is one of the most beautiful and exclusive islands in Belize, South Water Caye sits on the reef on the north side of South Water Cut, which is a 1⁄4 mile wide gap in the reef. Grunts, black groupers, snappers and moray eels all hide out in the overhangs and make for a spectacular snorkeling experience. Head to the Blue Marlin Lodge, one of our favorite little bars in all of Belize for an icy cold Belikin beer and a game of billiards, or watch the pelicans gather as the fishermen return and clean their catch.

Man-o-War Caye
From afar the designated bird sanctuary looks like any other tiny mangrove island, but as you journey closer to shore the frenzy of activity becomes apparent like a bees’ nest, with birds soaring in the sky above in every direction… and the guys inflating their red gular pouches for the ladies during breeding season. The three different types of mangrove vegetation provide a perfect sanctuary to a variety of indigenous bird species, including Pelicans, Brown Booby birds, and the Magnificent Frigate birds (also known as Man-O-War birds).

Tobacco Caye
This 5-acre palm-fringed coral island perched on the reef is a great place to snorkel or dive from the shore, plus its central location means it is within 10 minutes by boat to some of the best snorkel sites in all of Belize. There are a couple of small laid-back resorts and a tiny beach bar serving fresh coconut water and icy cold rum cocktails with hammocks to lounge in. Thirty-nine local islanders call this rock their home and it’s a great place to learn about their way of remote island life.

Caye Caulker
‘No shirt, no shoes, no problem’ is the island motto and it typifies the vibe. The white sandy beaches, ocean breezes, fresh seafood, azure waters and a fantastic barrier reef on its doorstep make it a perfect place to relax and unwind. Explore the island at leisure, check out the arts and craft stalls and soak up the colorful Caribbean vibes, or head to ‘Margarita Mikes’ and get the party started!

North Long Cocoa is one of our favorite islands as it’s a fisherman and snorkeler’s mecca, with a maze of sand bars, coral reefs and deep channels in between. There are some palapa structures over the water that make for a perfect place to enjoy an al-fresco lunch, and 9 times out of 10, there is not a soul to be seen for miles around.