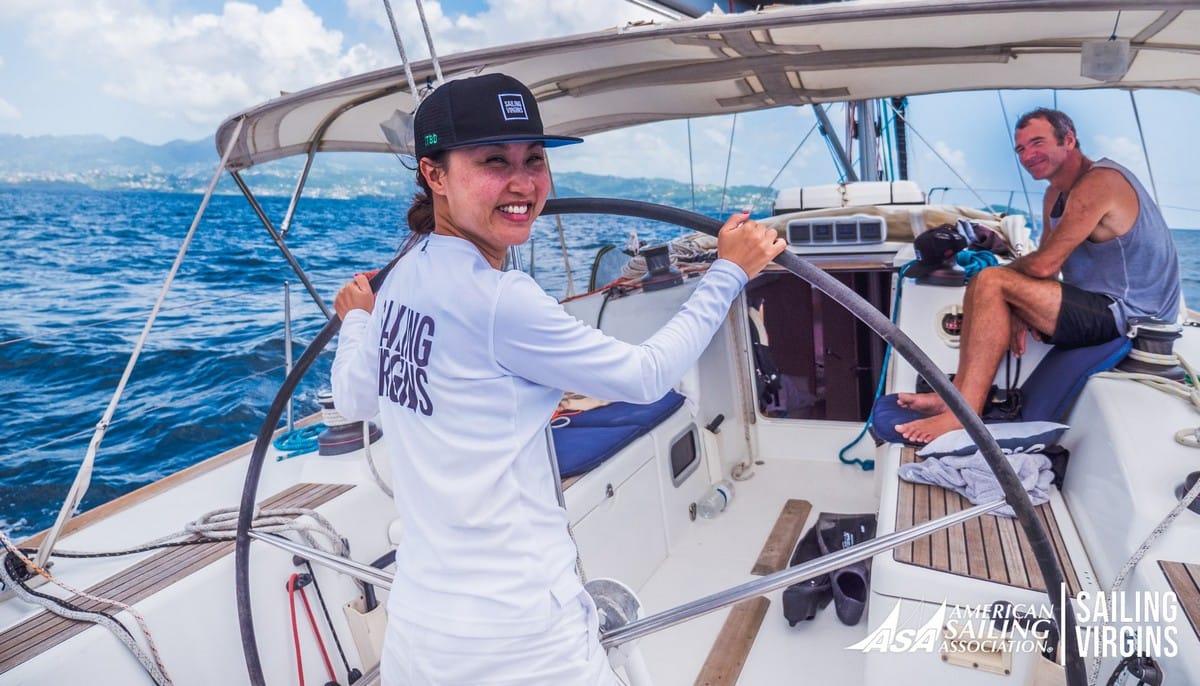 If you spend any time in the British Virgin Islands you’ll see Sailing Virgins shirts, hats and even flags, everywhere. So what is Sailing Virgins? Get a little insight on ASA sailing school Sailing Virgins. Learn to sail with Sail Virgins and you might readjust how you view sailing.

What can new sailors expect when sailing with Sailing Virgins?

Sailing Virgins is the only sailing school in the world that solely caters to people in the 20s-to-athletic-40s age range. For people in that group, we are able to offer an experience that is unmatched. From our morning routine (Wim Hof breathing, meditation), to the music that is played during the day (check out the Spotify Sailing Virgins Playlist to get a taste), to the other amazing people on your course, to the Paradisical waters that we sail in (Virgin Islands and Croatia), a week spent with us is pretty unique. Check out some reviews (like on TripAdvisor) to find out what our students think about it.

What are your top three reasons to sail with Sailing Virgins?

1. For people in their 20s-athletic-40s, there is no other sailing course where you can sail hard with instructors that are Yacht Week and ocean-crossing veterans, and are still in their 20s and 30s.

2. The boats we sail on are awesome. Most of our courses happen on Beneteau First series boats: the legendary racer-cruisers that have won offshore races and yet have the comforts of a cruiser.

3. The network of people you meet and stay connected with. The ex-Virgins community is global and gives you things like discounts on chartering boats (globally), sailing opportunities (like our ex-Virgins sailing weeks that happen each year) and gear (Sailing Virgins apparel is in high demand!).

But these points are our opinion. Hearing from the students themselves is even better. Here is a link with a few of our students giving their opinions: https://sailingvirgins.com/why-sailing-virgins/

Three things to see while visiting the Virgin Islands with Sailing Virgins?

There are so many cool things to see in the Virgin Islands, but here are three that stand out:

1. Soggy Dollar at White Bay claims to be the spot where the Painkiller – a notorious local pirate-inspired cocktail – was invented (controversial) and is a “must hit” spot during the week

2. Savannah Bay is a beautiful, white sand, rarely-visited (and therefore empty) beach as the charts show rocks everywhere, but there is a safe way through known only by the locals

3. Long Bay, Virgin Gorda, has a wreck dive that is great for anyone who enjoys freediving or, when visibility is good, snorkeling.

Little Necker Island, next to Sir Richard Branson’s Necker Island, comes a close fourth on this list. Over the years we have refined our courses in the Virgin Islands so they have a balance of sailing, freediving, hiking, snorkeling and other activities that make for a week of awesome adventure.

It depends on what students are looking for. Our Island Adventure courses, sailing between different islands in the Caribbean, happen in June, July, October and November each year. Our British Virgin Islands courses happen from December to May and have consistently good trade-wind conditions during that time. In the summertime, we now offer Croatia-based courses held during August and September.

Is it a good spot for first-time cruisers or is it more for experienced sailors?

The British Virgin Islands are fantastic for first-time cruisers, as there is negligible tide, consistent conditions, plenty of services for cruisers, and relative ease of navigation. Experienced sailors (or generally more adventurous people) tend to look more towards our Island Adventure Courses where we sail offshore, between different islands, and at night.

Why is learning to sail with Sailing Virgins a good option?

There are plenty of decent places to learn to sail. However, for the younger crowd, only Sailing Virgins provides a customized week of full-on adventure, sailing and the occasional party or two. All in the pristine, warm waters of the Caribbean and Mediterranean.