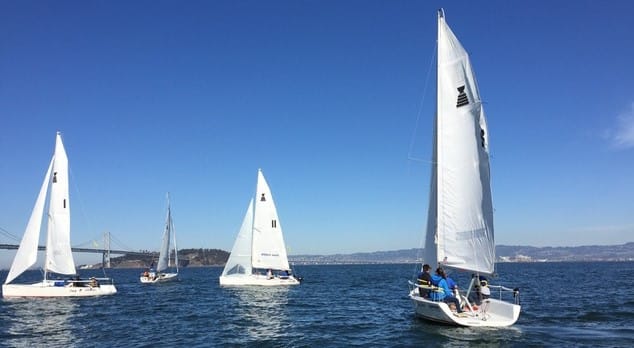 The American Sailing Association is more than just an organization that hands out sailing certifications. It is an advocate for the environment, it is a voice for the sailing community and at its core, it is an institution whose ultimate purpose is to get people out on the water safely and confidently.

All of this does not happen without the tremendous amount of work done by over 400 schools and affiliates and well over 7000 sailing instructors around the world. This global community of sailing professionals works in concert to get the word out about sailing, the sailing lifestyle and the importance of an excellent sailing education.

Kim Walther is a sailing instructor at St. Augustine Sailing in Northeast Florida. Her passion for the ocean and sailing comes through in her writing on her lifestyle blog Deep Water Happy where she shares tips on everything from sailing to travel to healthy living. She has a self-proclaimed obsession with the outdoors and has sailed the east coast from Maine to the Caribbean.

Greg Martin is the owner and head instructor of Sail Hawaii. Captain Greg has been sailing since he was a kid growing up in San Diego and he further refined his sailing skills at the US Naval Academy. After the Navy, he became a middle school math and science teacher in Okinawa and it was only natural that his passion for sailing and teaching would come together when he first started teaching ASA courses in Japan with Yoh Aoki.

Capt. Dan Ryder is quick to tell you that he loves sailing the Santa Barbara Channel between Ventura County California and the Channel Islands. A Navy Veteran and a veteran of the water with over 40 years of sailing experience, Capt. Dan has seemingly sailed everything from the USS Nimitz to a 14’ Hobie Cat. Sail Channel Islands offers everything you need on the water from ASA certifications to day charters to weddings at sea.

Captain Joan Gilmore can be found at Sail Away Sailing School in Minnesota but that is just her physical address. You will really find her out on the water as she leads trips to her favorite ports on a regular basis. She holds a master’s degree in adult learning styles and has been an Instructor Evaluator for ASA since 2000, training Small Boat through Advanced Coastal Cruising Instructors in the U.S., Japan, and the Caribbean.

Captain Joe Mastrangelo is the protagonist of an adventure novel. He is larger than life and his stories fill the page with humor and excitement. His passion for the water comes through in how he crafts his tale but his passion for people is evident in what he does. “CJ” as he is known to his friends and students is the lead instructor and founder of Veterans Sailing Association in the Florida Keys. His specialty is teaching other veterans, like himself, the art of sailing.

Stacey Brooks seems to always be on a boat. She recently completed a sailing adventure in Cuba and will be sharing her stories from that journey with ASA readers in the near future. Her school, Sea Dog Sailing is based in The British Virgin Islands. If there was ever a person who personifies what ASA is trying to promote with the “Women on the Water” campaign it is captain Stacey Brooks and her ever valuable first mate Allison Beauvais.

ASA is encouraging women to get out on the water and, with that, we are highlighting the adventures of our women instructors as they lead expeditions around the world and spread the love and joy of sailing to as many people as possible. Captain Anne Alberg recently sailed from Seattle to New Zealand aboard S/V Arctic Loon and we have profiled her journey in Women on the Water – The Journey of the Arctic Loon.

If you need a sample of what a resume should look like you would look no further than the background of Captain Lisa Batchelor Frailey. A few highlights include retired Navy Captain, C-130 Aircraft Navigator, Oceanographer, Meteorologist, ASA Instructor and USCG Master since 2006.  She is the co-founder of Sail Solomons and an ASA Oustanding Instructor. More importantly, she loves sharing her love of sailing with everyone.

Jenni is the perfect example of anyone who ever had a dream and worked hard to make it come true. She hails from land-locked Wisconsin but now sails on the Caribbean waters of Grenada & the Grenadines with LTD Sailing – “Living The Dream” Sailing School and beyond! She has her USCG Captains License as well as her RYA Yachtmaster certification. She teaches ASA 101 – ASA 114.

Captain Ivan fell in love with sailing as a youth at a summer camp in Wisconsin. The quiet magic of harnessing the breeze to sail across the lake was superior to paddling or the racket of a motor. The love of sailing has drawn him to the water from Maine to the Caribbean and the freshwater paradise of the Great Lakes. Ivan is the quintessential racer-cruiser, from winning the Mac to cruising the Caribbean, he is at home on the water. He holds a USCG 50 ton master’s license.

The Schools We Featured in 2019

Spend any time in San Francisco and you’ll be hard-pressed to ignore the Bay. While the sourdough bread bowls and cable cars get a lot of press along with world-class dining and the Golden Gate bridge; the sailing in the Bay is what should attract you to this Northern California city.

As the wheels hit the runway in Havana, I gasped with the strong realization that I was finally fulfilling this lifetime dream. After all my years at sea around the Caribbean and the world, deep in my soul, I had always wanted to experience and sail Cuba. The largest island nation in the Caribbean sea, ironically the closest to the US, and yet I had never been there. Cienfuegos was our home base for our sailing charter out of Cuba. Sea Dog Sailing Inc has traveled all over the world taking customers to challenging and unknown venues but Cuba was a place that threw up the sorts of barriers that had made me nervous.

When I turned my back on the Statue of Liberty, the view of New York City romanticized everything about this metropolis. Sunshine bouncing off the ripples in New York Harbor, the sounds of the chaos on the city streets replaced by the sounds of a boat cutting across the water. New York from the harbor is enchanting.

The Sailing Season: Seattle As a Sailing Destination

Take a moment and breathe in the crisp air on Puget Sound. Feel the wind as it moves across the water and through your hair. Mount Baker in the distance, Victoria to the north and the Pacific Ocean beyond a series of islands heading out west. For the lover of the outdoors, the Pacific Northwest is the ultimate playground of lush green forests and deep blue ocean that is alive with wildlife.

In case you didn’t know, it is common knowledge that the best way to see Greece is by boat. By sailboat to be exact. Sailing the waters off the coast of Greece as well as visiting this archipelago on your own schedule, dictated only by wind and your need for picturesque anchorages, is a sailor’s dream.

7 Exotic Locations To Learn To Sail

It would seem that a sailor is always seeking the exotic in an adventure. While sailing can be the entire focus of a vacation, often learning to sail or brushing up on your sailing skills is just a fraction of your vacation time and budget. These destinations will give you an opportunity to satisfy your craving for an exotic locale as well as allow you to sail in paradise.

One of the coolest things about sailing is the access it provides to some of the most amazing places the planet has to offer. Although plenty of these places are right here in the United States, many of us crave destinations far far away, and making that possible is a big part of what the American Sailing Association is all about.