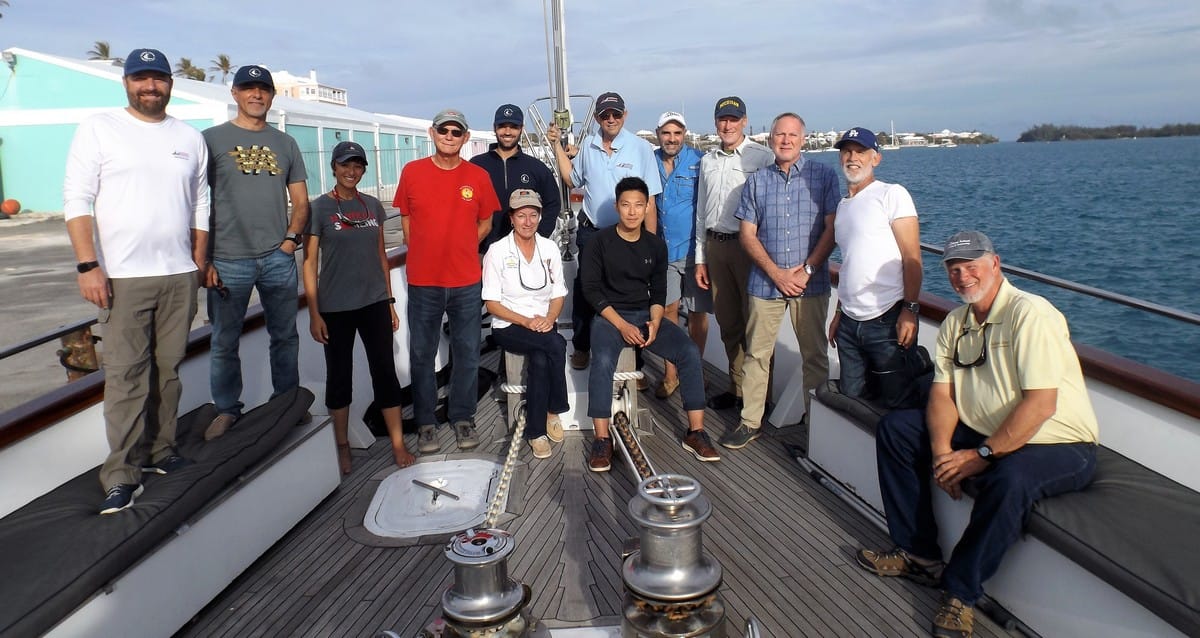 Currently, a group of students is preparing to embark on a voyage from Bermuda to the British Virgin Islands. On that voyage, students will earn their ASA 108 and ASA 117 certifications while instructors will earn ASA 208 and ASA 217.

Instructor Evaluator, Captain David Renoll of R & R Charter and Sail School is leading the courses and shared his thoughts on the first leg of this voyage.

Before the students and instructor candidates arrived, I met with Captain Mike.  Together, we discussed our plans for the class, in particular the watch system and emergency drills (fire, MOB, abandon ship).

When the students began to arrive the next day, I met with each separately to discuss exactly what course they were completing.  Several, who were initially missing the required 106 or 206 certifications, had actually completed this requirement prior to arriving on Arabella.  Because we had a weather delay, we had the opportunity to work through much of the course work prior to departure. This included the great circle plotting and transferring this to a Mercator chart, discussions of many of the course topics, an introduction to the sextant, the basic celestial navigation concepts, and some basic practice taking some sextant sights in NYC harbor.

The delay also allowed the crew and the students to become acquainted with each other.  During the passage, both groups worked well together, standing watch together, doing routine boat checks, etc.  By the time we arrived in Bermuda, it seemed as though the two groups had become one large, great crew working together.

The Students Becoming The Teachers

I arranged for the instructor candidates to actually teach and lead the discussions for many of the 108 topics.  It was very interesting for me because during a normal IQC session the candidates are “teaching” each other. During this passage they were actually teaching students.  The discussion sessions were extremely productive as well; everyone shared their expertise with each other. I was truly amazed at the brainpower we had with this group.  In fact, this was the one point that everyone emphasized most; the huge amount of shared knowledge and experience. This alone made this experience worthwhile.

Prior to the departure, I had sent all the instructor candidates the ASA required list of essay topics.  Several arrived with these typed and ready to turn in to me; others wrote their responses during the passage.  I read each of these and met individually with each to discuss their essays. For the students, I assigned a number of essays for them to write each day and turn into me by that evening.  All wrote excellent essays!

While underway, each student and instructor candidate took several sun sights; some took a morning moon sight.  We had limited visibility during the twilight times and were unable to do any Polaris sights. Most of the students achieved good accuracy with their sextant sights once they figured out that they had to mark their sight when the boat was level and not rolling.

Near the end of the passage I met with the entire group to debrief.

Overall, this was a successful experience for the students, the instructor candidates, and for me.

This joint venture between ASA and the Manhattan Sailing School is still in the trial and error phase but if these notes are any indication of the success of this program you can bet that you will see another opportunity to join one of these voyages either as an ASA 108 student or as an IQC candidate.