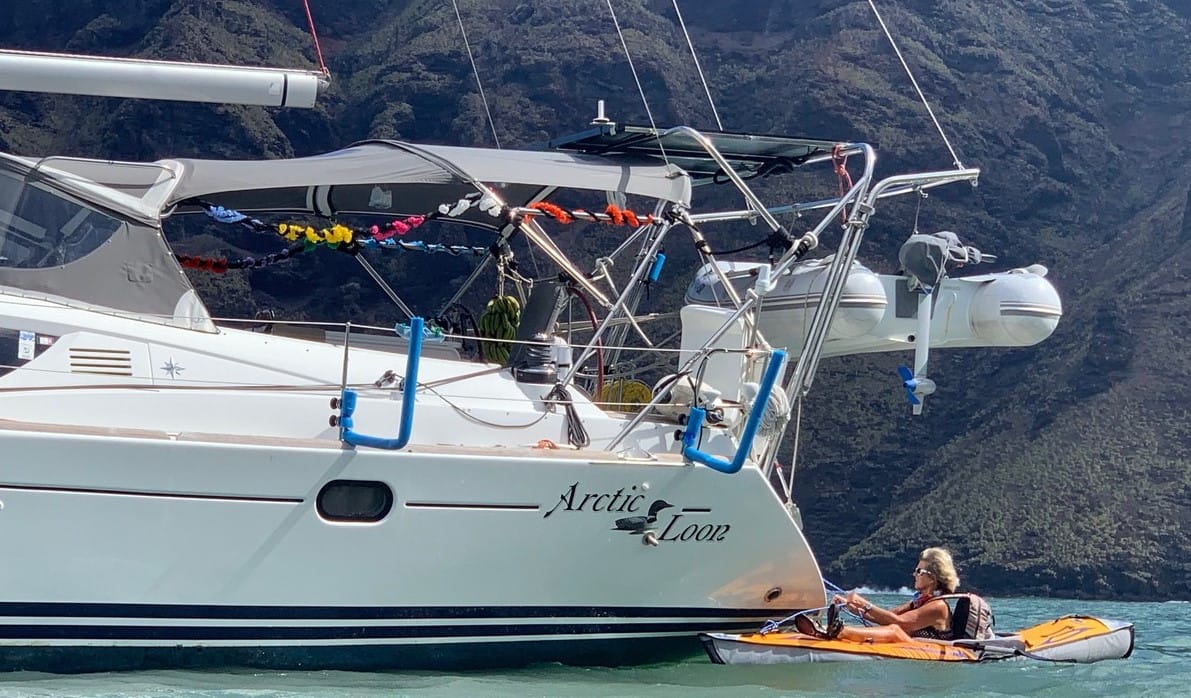 We have been following along with the Arctic Loon and Captain Anne Alberg as they journey from Seattle to New Zealand.

Her adventures have been mentioned on the ASA website. You can read them here:

We are at Minerva Reef waiting for the “weather window” to make the final 7-day passage. Maybe a story could describe this final segment before we arrive in New Zealand after our 14 months on Arctic Loon.  It is the scary leg of the journey where they say don’t get stopped by analysis paralysis or you will never leave.

However, a very seasoned and well-loved NZ cruising couple went in heavy seas last week… portholes got blown out which sank the boat only 25 miles from their arrival in Opua.  Husband died; wife is in critical condition. This is weighing heavy on our minds as we try to make the “best decision” for Arctic Loon and her crew!

The Ghosts and Goblins came early and gave us more tricks than treats….

And here we thought we had skirted the West side of the Trough at 2 am yesterday 10/30 when the winds had turned South and were calm with the lightning and rain off to the East.  We heard the Sirens of the Sea say come this way! When in fact we were suckered into Alice’s Rabbit Hole for an adventure none of us will soon forget….

We discovered the big winds and big waves that follow a Trough in the South Pacific!  Over the last 35 hours Arctic Loon has had sustained winds 25-30 kts with gusts to 33 kts if we trust our instruments, gnarley, gargantuan one after another 12-15’ waves – some had to be close to 20’, the rest were just big, choppy and relentless, no squalls/rain and some amazing blue sky and a few rainbows…

It was a long night, we ended up surfing huge waves to the West and NW on bare poles hoping not to be pushed too far back North.  A couple of rough waves hit our stern and a huge rush of water drenched the helmsman and sleeping crew.

Diana just said our boat is trashed, wet clothes drying everywhere, lentils in the bilge, stuff tossed all over our cabins and even our ceiling panels came down.

Miles to Go:  389 NM to Opua and yesterday morning we were 408 NM.  It was a waste of 24 hours but we all survived and have the stories to prove it.  We have absolutely earned our Minerva Yacht Club T-shirts!

During the night we picked up a boat on AIS, this morning we discovered it was 3 French Sailors on Catamaran Largo that we had met at the Minerva Yacht Club.  They sailed right next to us, so bizarre and also fun to have another boat out here with us!

Good luck to all who are on this New Zealand to Opua Journey with us!  Looking forward to swapping stories over a glass of wine in Opua.

WE SURVIVED!!!!  All of us, even our crewmate Kristie who has been deathly seasick since Minerva Reef.

Today it is sunny, gorgeous with 15 kts tacking close hauled upwind with 1-2’ waves which seem quite calm compared to what we experienced for the last 48 hours.  Every sailor’s dream!!!!! And we are listening to our favorite sailing songs like Sail Away by David Grey, Southern Cross by CSN&Y, and Sailing by Rod Stewart. We have 357 NM left to go in picture perfect conditions!!!!

Here is the Update we posted on the Following Sea Net to the boats sitting at Minerva Reef waiting for their next weather window.  Some are jealous they did not come out with us. We feel lucky to have successfully managed our rough South Pacific Ocean conditions; it will never be perfect on this crossing except once in a Blue Moon!

There are 4 offshore cruising boats (Tuatara, Largo, Flocerfida and NewNexus) out here with us within 200 NM that also weathered the stormy conditions.  At least we did not have the 25’ seas and 50+ kt winds experienced during a trough two weeks ago when a professional well-known New Zealand cruising boat sank 25 NM off Opua and the husband lost his life.  This has been in the back of our minds as we embarked on this challenging offshore crossing well-known for its ability to test even the best of sailors.