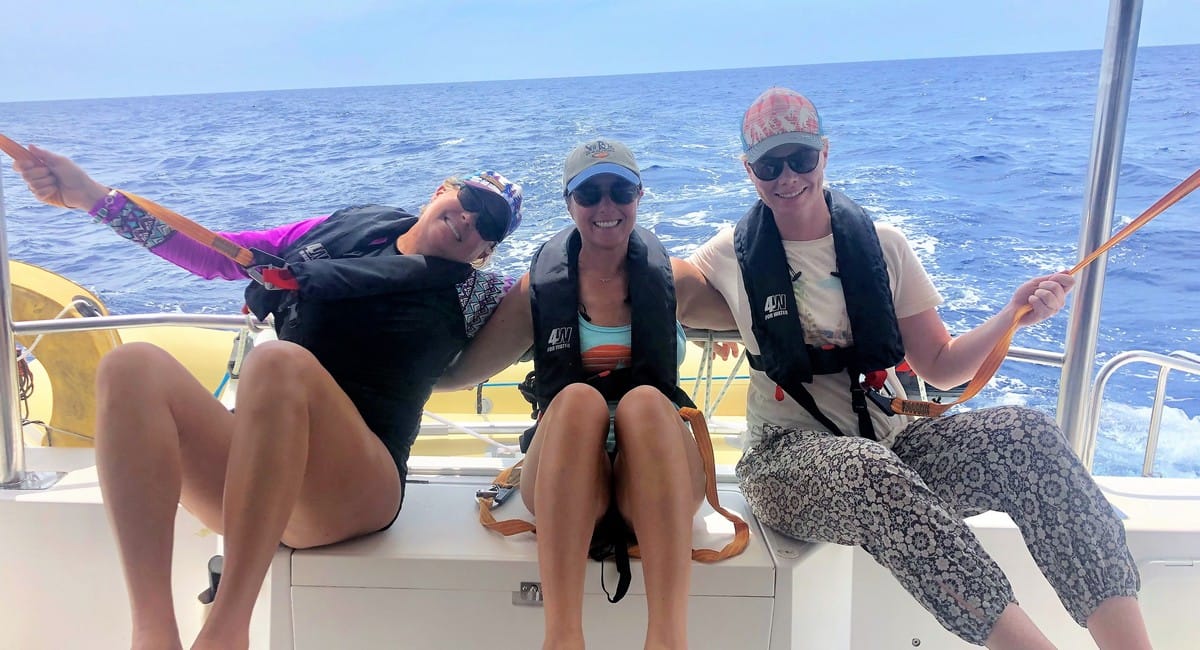 The American Sailing Association has launched a new campaign designed to get more women on the water. “Women on the Water” encourages more women to take the helm.

These are nine stories out of many, of women who are sailing. Do you have a great story about a women sailor or a group of women sailing?  If so, please share it with us. Maybe a group of women has started sailing together or there is a woman captain that is dominating the Wednesday night racing scene or perhaps you know a group of women who just love being out on the water; we want to hear about them and feature them on the pages of ASA.

Stacey Brooks seems to always be on a boat. She recently completed a sailing adventure in Cuba and will be sharing her stories from that journey with ASA readers in the near future. Her school, Sea Dog Sailing is based in The British Virgin Islands. If there was ever a person who personifies what ASA is trying to promote with the “Women on the Water” campaign it is captain Stacey Brooks and her ever valuable first mate Allison Beauvais.  …Read More

The Journey of the Arctic Loon

“I have a boat and the time, and I can’t think of any reason not to.” These were the words that started female Sailing Captains Diana Trump’s and Anne Alberg’s journey to the South Pacific. Diana’s husband Jeff was unable to leave his business for early retirement, but she felt this was her time for the offshore adventure. Jeff supported her in every way including his invaluable technology expertise. ..Read More

Captain Joan Gilmore can be found at Sail Away Sailing School in Minnesota but that is just her physical address. You really find her out on the water as she leads trips to her favorite ports on a regular basis. She holds a master’s degree in adult learning styles and has been an Instructor Evaluator for ASA since 2000, training Small Boat through Advanced Coastal Cruising Instructors in the U.S., Japan, and the Caribbean. The former ASA Education Coordinator now serves on three non-profit sailing boards and writes articles for Sailing and other national magazines…Read More

Less than two years after taking the week-long ASA Course, Robin’s immediate response when invited on short notice to crew in French Polynesia on SV Arctic Loon was “I’m booked! Yay!, I will arrive in Rangiroa, Tuamotus on May 24th“… Read More

Get To Know Five Women Sailors

Things I Learned in ASA 101 with Lauren Cairo

Lauren is a marine conservationist, writer, and advocate for ocean-friendly living. She’s spent her entire life in the water, snorkeling, scuba diving, and kayaking, and has traveled to various parts of the world to study the ocean’s biodiversity and explore coastal communities. Lauren realized that the very best way to experience and appreciate the marine world is to get out there and start sailing!..Read More

Kim Walther is a sailing instructor at St. Augustine Sailing in Northeast Florida. Her passion for the ocean and sailing comes through in her writing on her lifestyle blog Deep Water Happy where she shares tips on everything from sailing to travel to healthy living. She has a self-proclaimed obsession with the outdoors and has sailed the east coast from Maine to the Caribbean. If she is not racing with the St. Augustine Yacht Club, she is teaching ASA sailing courses or she is diving, or running, or cycling…Read More

I’ve always looked out over the Pacific and wondered about our ocean neighbors, the cultures, the people, the land that share the Pacific together. What the ocean looks like in the middle, what it feels like. And now I know. I want to continue experiencing more of her secrets…Read More