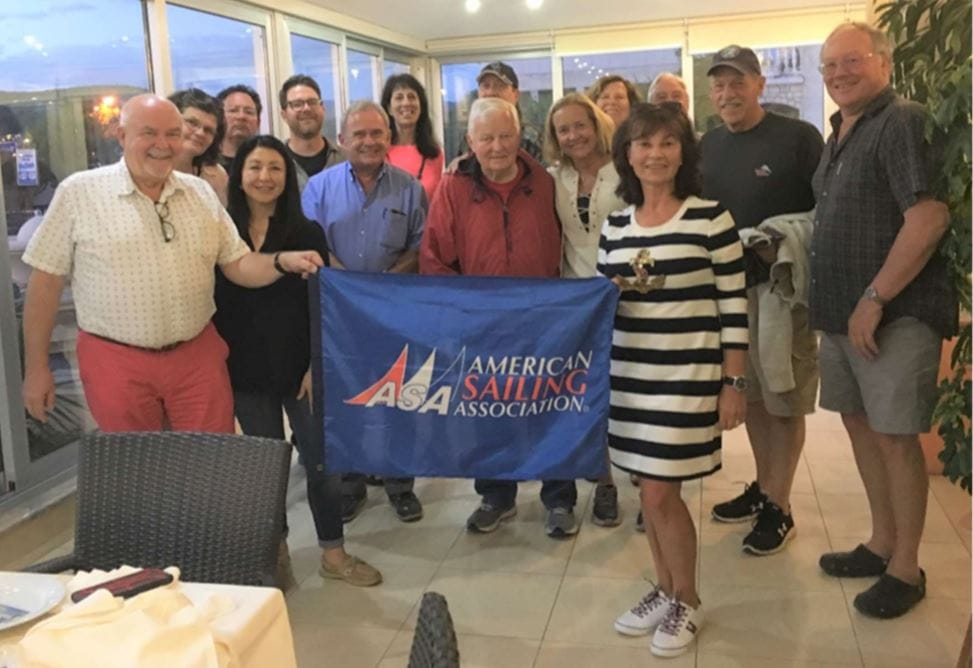 This Croatian Flotilla is organized by Sea Safaris in Chicago and ASA Captian Jean “John” De Keyser and his wife “Admiral” Mila. Follow along in this three-part series as they lead the way through the three-week journey.

On Friday, May 31, our crew members for the first of three weeks of flotilla sailing in Croatia gathered at the Trogir Palace Hotel in Trogir near Split for the initial briefing and introductions.

Over wine and Dalmatian cold platters of prosciutto, cheeses, and tomato salads, we discussed what to expect during the upcoming week on our way down to Dubrovnik. There was an immediate sense of fellowship among the participants, some of whom were repeat flotilla sailors. Three boats were lined up for this trip. Veteran Croatian sailor Bob G from California had chartered a Sunsail yacht through his ownership program and would be joining us on Saturday night from the charter base in Trogir. The other two boats with Skipper Alan and I would be leaving from the Marina Kastela base. We had a total of 16 participants. 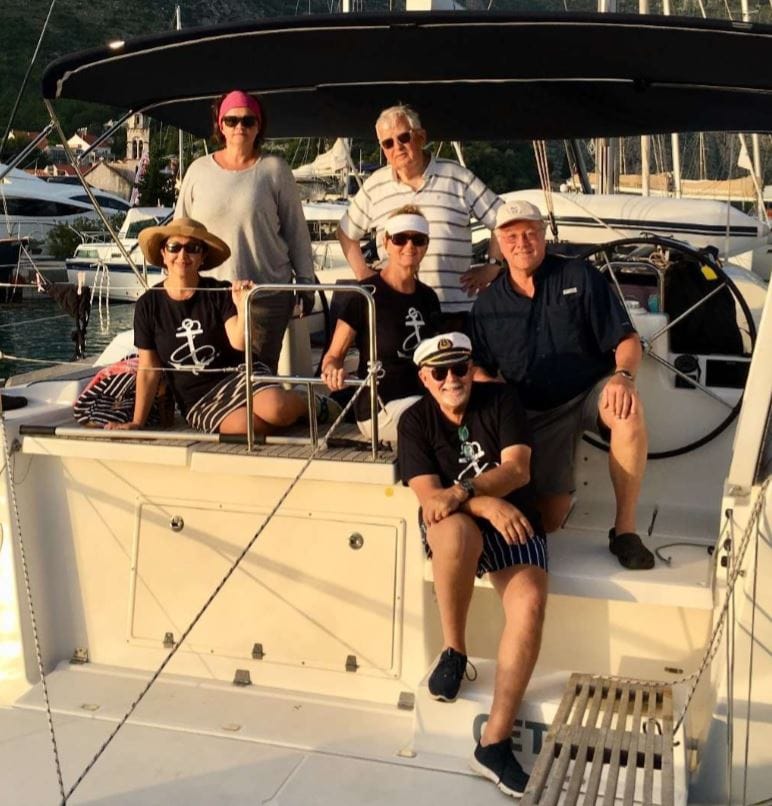 When we arrived at Marina Kastela on Saturday, we were surprised to see how quiet the marina was.  Normally on a Saturday morning, the place would be bustling with people. Prior week sailors getting off the boats, cleaning and repair crews getting the yachts ready for the new charter clients but, this time, there was no usual mayhem and our boats were ready at 14:00.  According to the charter company’s office manager, Petra, the season was off to a very slow start.

After completing all the paperwork and having been checked out, we left for our first destination where we would meet up with “The Moochers,” in the Sesula anchorage on the island of Solta. It was rainy weather with a gloomy sky and, by the time we reached the anchorage, everything was soaking wet.

Bob and “The Moochers” (sounds more like a rock band from the ’60s than a sailing crew, doesn’t it?), was already at the buoy there and we rafted up to them.  Skipper Alan on Tina soon joined our rafting party. These mooring balls are free if you have dinner at the restaurant that manages them.

The place was called Sismis, Croatian for The Bats.  We had been here before and, in normal weather conditions, this place is just lovely.  In the dark with rain pouring down, not so much. To make things even more challenging, we hiked the wrong path to the restaurant.  With my busted ankle and crew member John G. who had problems walking over the rolling stones (nothing to do with the rock band) of a goat path, there were some scary moments and, by the time we had figured out how to finally get to the restaurant, we were cold, wet and miserable.   Thank Goodness for good heartwarming Croatian wine, food and hospitality! They made more than up for it.

The weather was a bit better the following morning, Sunday the 2nd, and we set sail for the Pakleni Islands across from the historic city of Hvar.  We had reserved mooring balls in the Vinogradisce harbor on the south side of St. Klement island and the backside of Marina Palmizana.

It is a beautiful anchorage from where we took a water taxi to Hvar where our crews went to discover the Spanjola Fortress overlooking the city and from where you have a stunning panorama of the Adriatic and surrounding islands.  Yours truly, with his busted ankle, wisely decided to stay behind and take a strategically located seat at the Kalavanda Bar to do people watching, sample some of the many concoctions the mixologist could come up with and learn some valuable life lessons as evidenced on the chalkboard of the bar.

Monday morning, we set sail for Korcula, according to legend, the home of Marco Polo.  It was a long 36-mile trip with a mixture of decent sailing and motor sailing. We had made reservations at the ACI marina. The wind had picked up (of course at the end of the day) and the wide channel between the Peljesac Peninsula and the island of Korcula was full of windsurfers and kitesurfers. Because of the windy conditions, several boats (not ours) encountered problems with the med-moor docking.  Two yachts made hard contact with our “Cetina” when they tried to dock. One got a big gash in its fiberglass when hitting our anchor, another ripped off part of the teak toe rail. It made for some intense moments.

Our crew decided to have dinner on board as we had a plancha griddle on our boat. We prepared a culinary delight of fresh mixed Mediterranean vegetables, plancha-grilled tomatoes and the typical Balkan cevapcici, small skinless sausages of lamb and beef meat.  All this, of course, with the obligatory nectar of the Gods! The other crew members went for dinner in Korcula, a mini-Dubrovnik-like city which could be right out of Games of Thrones.

The following morning, we had a late start towards the National Park of Mljet island.  One of our favorite destinations. We entered the picturesque harbor of Polace, which derived its name from the ruins of the Roman palace that still stands there and docked at the Sponga restaurant.  Docking and shore power were free if we had dinner there. Normally we would have gone that same day to visit the national park and the monastery on the lake, but we decided to stay put and relax. Dinner at Sponga was a fun event with all the crew members in good spirits and lots of wine free flowing.

A minibus was hired the following morning to bring us to the other side of the island for a visit to the cave of Odysseus. According to Homer’s legend, the Greek hero had been kept captive for seven years by the nymph Calypso.  If you ask me, that was a very plausible excuse to give your wife for not coming home right after the Trojan wars.

The hike from the main road to the cave was quite hard, especially for my busted ankle.  Fortunately, I had popped enough Aleve and had hiking sticks to help me get over the treacherous stones and rocks. Along the way, we picked wild herbs that we could use for cooking.  The scenery and nature were just spectacular. Josh V made several jumps from the cliffs in the water and swam into the cave but Calypso was nowhere to be seen. Good thing because we were not going to wait seven years for him.

After that visit, we left the restaurants and anchored out in the Bay of Polace for another night there. Bob and “The Moochers” rafted up to our boat and I hung my hammock between the mast and the forestay for a long nap while the rest of the crew dinghied to shore and went to the lake and the Benedictine monastery.

We prepared food on board and cooked hake fish on the plancha with some of the herbs that we had picked on the trail to the cave.

Thursday, we bade farewell to “The Moochers” who were sailing back to Trogir while we continued our way to Dubrovnik.  Our next stop was a small anchorage on the island of Sipan where we had lunch and took a refreshing swim before heading for the new ACI marina in Slano. The facilities and docks were in impeccable condition and we went to the local village for a late dinner.

It is amazing how fast a week goes by.  On Saturdays, when we start our flotillas, the next Friday seems so far away and, before you know it, we are Wednesday and then, forty-eight hours later, it is over. Friday had arrived and it was time to sail to Dubrovnik and end our first week of Flotillas.

The sailing from Slano to towards Dubrovnik was very good but, in order to arrive on time at the marina, we had to fire up the iron genny and motor the rest of the way, under the huge bridge and up the river to the marina.

The ACI marina in Dubrovnik is by far my least favorite marina in Croatia.  It is overcrowded and way too large. We were told to dock at the end of a pier right next to the main channel and at least three incoming yachts hit our boat while heading for their slips.

Some of the crew members had to leave that same evening and others decided to stay the last night on board and have dinner with us at the restaurant of the marina.

The first week was over.  Tomorrow… Montenegro…

JOIN US NEXT YEAR IF YOU WANT TO EXPERIENCE THE FUN!