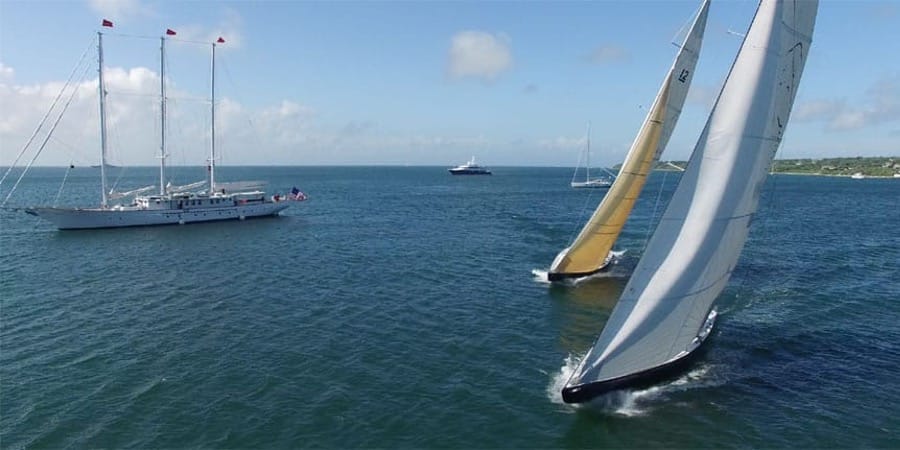 Pull up a chair and take the best seat in the house aboard the luxurious 157-foot three-masted schooner Arabella for a cruise from New York Harbor to attend the International 12 Metre World Championship being held off Newport Rhode Island from July 8th -13th. That’s right! ASA and the Arabella crew are teaming up again to offer you the best view on the racecourse for the 12 Meter Worlds in Newport.

This trip includes a night in New York Harbor, then a sail up the East River past the Statue of Liberty and the Brooklyn Bridge through the infamous tidal strait Hell Gate, up into picturesque Long Island Sound to Narragansett Bay and to historic Newport Rhode Island for fun parties, exciting racing, and prestigious award ceremonies, all while occupying a luxury stateroom on one of the most beautiful three-masted schooners in the world.

The 12 Metre World Championship will be the largest gathering ever of 12 Meter yachts in the United States.  It will feature more than two dozen boats from seven countries and International teams comprised of the best sailors in the world including America’s Cup veterans and Olympic medalists representing Australia, Canada, Denmark, Finland, Italy, Norway, and the United States.

The 112-year-old Class encompasses a living history of racing yacht design by the world’s foremost naval architects. The twelves represent the pinnacle of yacht development from 1907-1987 for the highest levels of international sailing competition and were sailed in the Olympic games (1908-1920) and the America’s Cup (1958-1987). If you are interested in participating in this fabulous experience please go to asa.com/arabella/12-metre-world-championship/om/arabella/interest-form/. The fabulous Owner Staterooms are available for $3,450/person and other staterooms are available from $1,890/person. All prices are based on double occupancy.

Sunday, July 7th @ 8 am
Arabella gets underway to Newport RI

Tuesday, July 9th through Friday, July 12th
Arabella will go out to watch the races which start at approximately 11 am.

There are also official events in the evenings that guests can attend if they so wish:


Saturday, July 13th @ 12 noon
Arabella will go out to watch the Parade of Sail followed by an awards ceremony at IYRS Restoration Hall. Awards ceremony tickets are $60 each. After the festivities the Arabella departs for a night sail back to New York.

If you’re interested in joining us for this amazing sailing experience then book now before it’s sold out!