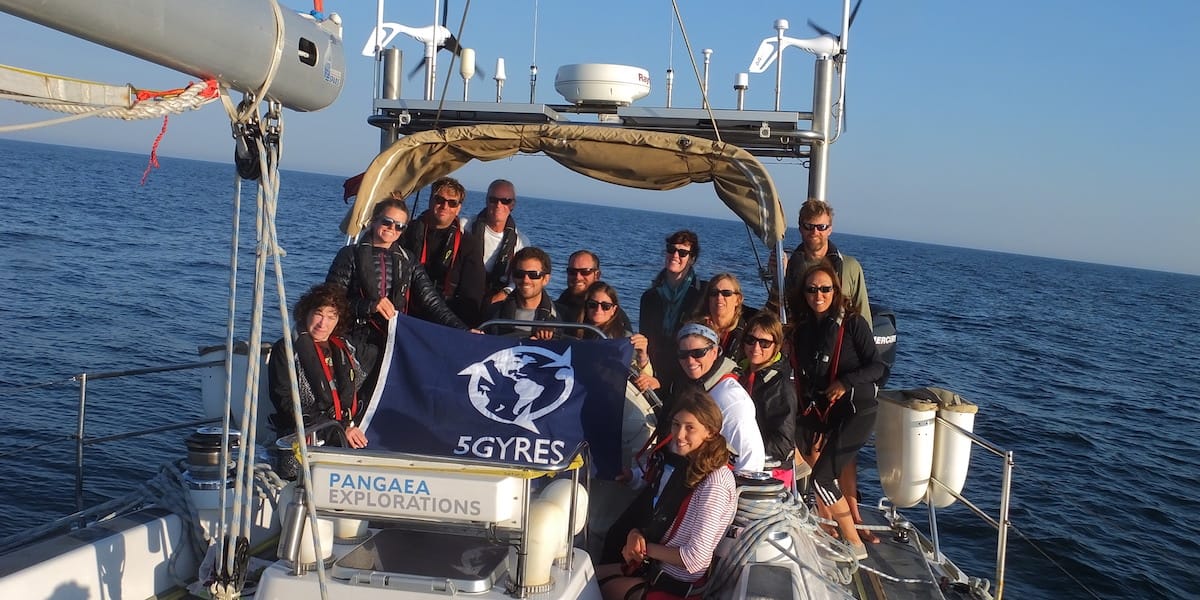 Sailors in every corner of the world are taking the ocean’s plastic problem into their own hands, or rather, into their own nets. Balloons, bags, bottles, ghost nets, and all kinds of plastic trash are being pulled out of the water by boaters everywhere, but what if we could do something more with all that trash?

This is where 5 Gyres comes in. Named after the five swirling masses of plastic “soup” in the world’s oceans, 5 Gyres is a science-to-solutions organization collecting data on the millions of tons of plastic out in the big blue and using the results to pass plastic bans and hold the producers accountable.

I got to catch up with their Advocacy and Education Director, Melissa Aguayo, to learn more about what 5 Gyres is up to and how sailors can get in on the action.

ASA: How did you first get involved with the ocean plastic issue?

5 Gyres: Growing up I never really considered myself or my family “environmentalist” until I got to college at UCLA. I was pre-med and wasn’t very passionate about the work I was doing, but I got involved with environmental student activism and loved it. I started doing education and outreach for a sustainable living program, and through that work, I discovered my family actually were environmentalists: I’m first-generation Mexican-American and so much of our culture is centered around conserving resources and taking care of the planet.
Working for 5 Gyres is actually kind of full circle for me as I first started learning about the ocean plastic issue through their work!

ASA: Have you been on a 5 Gyres sailing expedition? What was that like?

5 Gyres: I have not been on a full-on expedition yet, but I’m excited to say I will be going on an expedition to the Galapagos Islands soon! I have gone on a few mini-expeditions through our “Mi Mar” program, where we take high school students on the water to do microplastic sampling with our Mantra trawls. The program culminates with them coming up with solutions that they could do at home. One group of students were actually able to make a change at their school: after their field trip, they were angry to notice their cafeteria was using single-use plastic utensils. They took it up with the administration and sure enough, they succeeded in diverting over 200,000 plastic utensils per year from the landfill!

ASA: What’s the goal for the Galapagos sailing expedition?

5 Gyres: It’s a research expedition, so we’ll be taking our Mantra Trawl and sampling the water for plastics, but we also bring locals onboard. For every leg of the expedition we dedicate a spot on the crew for one local person doing plastic pollution work in their community. Our goal is to assist and amplify the work they’re doing. In Ecuador we are working with a group called “Plastico” and we will be running a Trash Blitz campaign with them while we are out there as well. 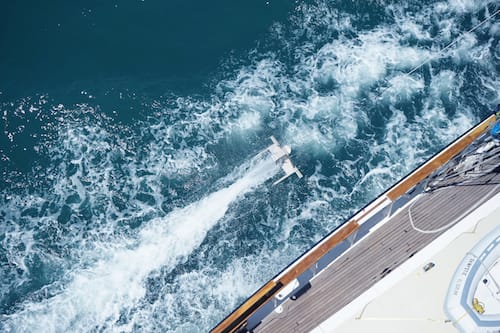 The 5 Gyres high-speed trawl at work, collecting microplastics from the ocean.

ASA: On a typical expedition, is it mostly collecting and sampling ocean trash with the trawl? What does 5 Gyres do with the data they collect at sea?

5 Gyres: We’ll also go on beaches and collect plastic trash along the shoreline. With the larger (macro) plastics we will analyze the most commons brands to identify top polluters in a particular region.
Traditionally we have been bringing the data home, but with Trash Blitz we are hoping to implement solutions in the regions that we are visiting. If we can empower these local partners with data, then they can implement meaningful solutions on the ground. It’s much better to come in as an ally rather than telling people what they need to do from an outside perspective.

ASA: We want in! How can sailors help get involved?

5 Gyres: We have our ongoing global ambassador network with over 750 people all throughout the world who are doing incredible work in their communities. We provide resources especially for our ambassadors like monthly webinars and presentations they can use to educate people about plastic in their own networks. I think sailors, surfers, and divers all have this natural desire to protect what they love.

What’s great about this program is that it’s also a fit for people who may not live near the ocean but share the passion for the water- so we provide guidance and a way to connect with other passionate people. Our ambassadors are an embodiment of the message “think global: act local.” This is a global issue and we have to keep that in mind, but you know your own region better than anyone else. So our ambassadors know what’s going to work best for their communities.

ASA: And Trash Blitz, this localized plastic campaign, do you have one coming up in the U.S.?

5 Gyres: We have Trash Blitz LA coming up soon, where we are gathering plastic pollution data, taking it all back to the community, to the participants, to the partners, and collectively coming up with solutions. We’re having 2 big days of action: April 20 and May 11. April’s cleanup is what we’re calling our “downstream day”- we’ll be collecting plastic along the LA river and along the beach and collecting data throughout those areas. May’s cleanup is our “upstream day” so we’ll be at parks, industrial areas, and even residential areas to capture every bit of plastic that we find. We’re also looking at brands, whenever that data is available, so we can take all that data back to the community. We’re hoping that the data will surprise us and show us something that we hadn’t anticipated!