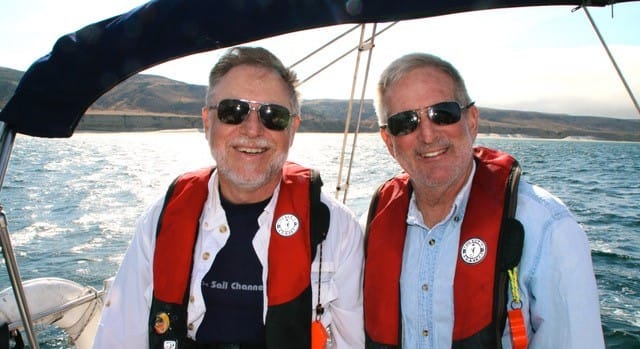 Capt. Dan Ryder is quick to tell you that he loves sailing the Santa Barbara Channel between Ventura County California and the Channel Islands. A Navy Veteran and a veteran of the water with over 40 years of sailing experience, Capt. Dan has seemingly sailed everything from the USS Nimitz to a 14’ Hobie Cat. Sail Channel Islands offers everything you need on the water from ASA certifications to day charters to weddings at sea.

Dan Ryder: In my 14th summer, I was a Counselor Under Training at Chicago’s Boy Scout camp in western Michigan. I was primarily an aquatics instructor teaching swimming, rowing, canoeing, lifesaving and serving occasionally as a canoe trip leader on the White River. About two weeks into the summer we received an Old Town sailing canoe – a gift from a long-ago camper.

She was about 16 feet, canvas on a traditional wood frame with a cane seat aft, a mast step, leeboards, a lateen rig with a well-used sail. She must have weighed 200, maybe 250 pounds.

All of the real counselors were college guys. I, almost a high school sophomore, was in awe of them. They knew everything. They even knew how to talk to girls. But I digress. Anyhow, I went to the aquatics director and asked him to teach me to sail our new boat. He waved me off. Literally – all I got was a grunt and a dismissive hand motion as if he were flicking flies off his dinner.

I took that to mean: “Go figure it out.” So I did. I stuck the mast into the step, tightened the wing nuts on the leeboards, grabbed a paddle and set off on Big Blue Lake. I’d paddled this three-mile route numerous times. Now I was just steering not straining with the sun in my face and wind at my back. I feel that now as I write. It was a glorious moment.

About an hour later I slid gently ashore, quite self-satisfied. Time to head back: I got out of the boat, picked up the bow and swung her around. With the boat lined up with home, I took my place in the stern. The sail luffed loudly. I wasn’t going anywhere. Well, hell, I could paddle back. But I had plenty of time, no one was expecting me for hours. So I picked up the bow and aimed it at the Girl Scout Camp, which was directly across the lake from my camp. The boom moved about four feet off centerline. I pulled on the rope, the sail filled and a half hour later I was at the girls’ camp. I ruddered in the direction of my camp. The boom moved to the other side and I pulled the rope, powered up and was home in less than an hour.

I had invented tacking!

I bought the Boy Scout Sailing Merit Badge book that night only to learn that tacking was already an established skill, that the rope I’d been pulling on was the mainsheet and that I was hooked on sailing.

ASA: Your most memorable student or class?

Dan Ryder: I hosted a couple on my new-to-me Jeanneau 46 about 11 years ago. Michelle had bought this cruise for her husband who had always wanted to try sailing. Rob loved it and couldn’t wait to find someone to teach him. I was that guy, but my schedule was chock-a-block, so I set him to reading. He powered through Sailing Made Easy, Coastal Cruising Made Easy, then Bareboat Cruising Made Easy and I still couldn’t fit him in for lessons. I recommended This Old Boat, Practical Sailor and – finally – after Bowditch (which I haven’t read thoroughly) we were ready to sail.

Rob and Michelle were a great team and zoomed through ASA 101 and 103. They were members of a small boating club and sailed three and, often, four days each weekend. They practiced and practiced.

Part of my first lesson is the admonition: Don’t buy a boat. But they did – a pristine Catalina 385. Now they were living on it every weekend and the weekends sometimes stretched to five days. For five years they sailed every opportunity they could find, completing ASA 104 and 105. For five years they sailed every day of every weekend except one Saturday when Rob buried his father. And right at the five year mark Rob won his master’s papers.

At this point, he knows far more about the mechanics of the engine, standing rigging, electrical systems and every other thing on my boat than I ever will. He tries to teach me, but in some circumstances, he declares me “unlearnable.”

It’s a helluva thing when the teacher becomes the student and the student becomes a guru.

Dan Ryder: I was in the navy for 20 years and had the opportunity to sail small boats (compared to the aircraft carriers I served on) in the Med, the Caribbean, the South China Sea, Atlantic, Pacific and the Gulf of Mexico as well as a lot of lakes throughout the country. Serendipity and my wife’s new job dumped me in Oxnard California. Had I done a little homework, I wouldn’t have been so peevish because Oxnard is the gateway to the Channel Islands. And Channel Islands is one of the best places on earth to sail. It’s about as pristine a sailing area as you’ll find outside of the Antarctic. On our last five night adventure, we were alone in our anchorage four times. I’m not a racer and I’m not a long-range cruiser and this place suits me perfectly.

Dan Ryder: Mental health. Particularly when I was teaching high school. At the end of school on Friday, I’d grab a colleague or two and head to Monterey, where I’d rent a boat and sail for a couple of hours. It was all that was between me and Zoloft.

Dan Ryder: It’s my oft-repeated opinion that if you don’t learn something every time you sail, you’re not paying attention. And that’s dangerous. 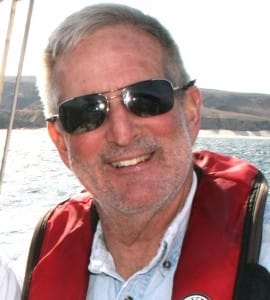 Learn more about Sail Channel Islands and Dan at SailChannelIslands.com.