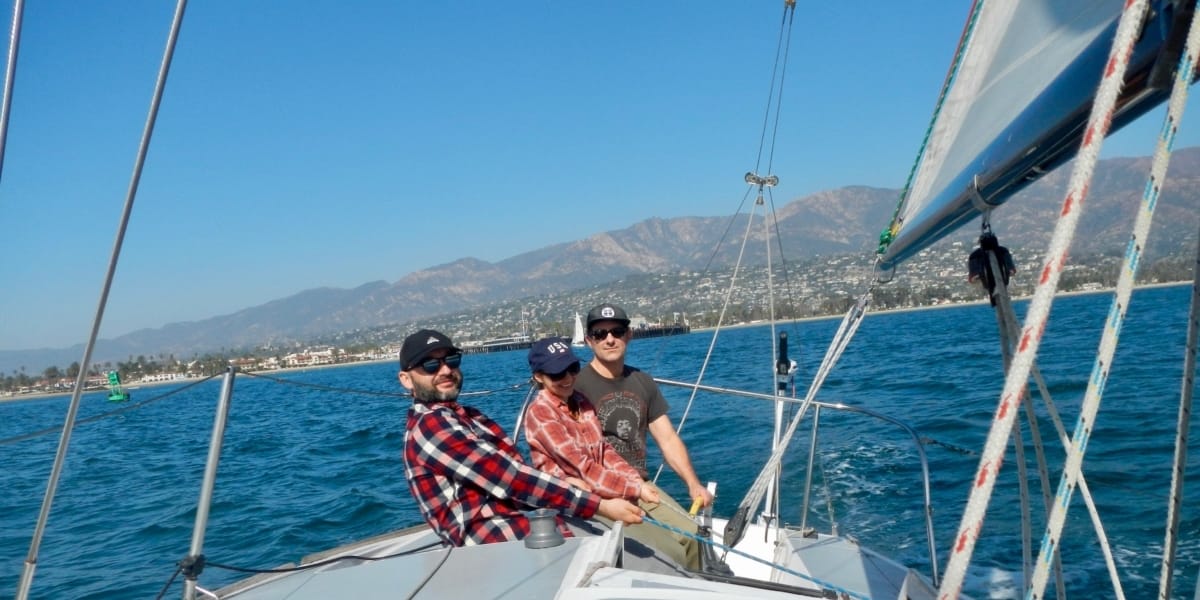 Join Lauren on her adventure as she embarks on a journey to learn to sail with Santa Barbara Sailing Center. Follow her as she gets her feet wet as a beginner, gains experience, and earns her ASA certifications. The ultimate goal is to complete ASA 104 and go bareboat chartering somewhere exotic.

Last night I spent a solid couple of hours with the books and with my own shoelace. It’s relaxing to practice tying knots in front of the TV. I’m not much of a “gamer” but I downloaded the Sailing Challenge app to check it out. You take a virtual boat out on the water and can experiment with different sailing maneuvers. For a beginner like myself it’s a fun way to make mistakes without the pressure of sinking and ruining everyone’s afternoon.

Another morning early to the Santa Barbara Sailing Center so I could sit with the book a few more minutes before the test. The docks were still and the wind felt just right. I’m starting to notice these things! I joined Dmitry and Travis in the classroom. Captain Quincy came in with his usual morning zeal and let us go over some last-minute concerns and questions. I felt very confident as he passed out the ASA test booklets.

We each finished a few minutes apart and paced around the dock naming boat parts while we waited for Quincy to grade us. All one hundred questions were multiple choice and required knowledge of not just what an item is but how it is used. I second-guessed myself a few times but I still felt certain I passed. The Captain approached us. “You all passed!” He handed me my paper and said, “Ninety-seven percent!”
I knew it! I officially know the basics. The trick though, I believe, will be to retain this knowledge. This will undoubtedly require me to spend plenty of time on and around boats… duly noted.

The three of us got to work setting up with a victorious pep, and the wind felt strong. We moved quickly out of the harbor without the assistance of the motor. Right out of the channel we entered a close haul and I felt a sudden pull on the tiller. “Do you feel that power?” Captain Q saw me brace myself as the rudder caught the water more sharply. “We’re really ripping now!” 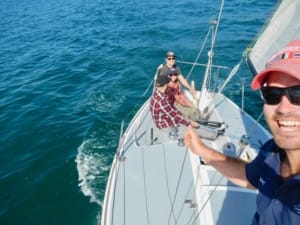 “I officially know the basics. The trick though, I believe, will be to retain this knowledge. This will undoubtedly require me to spend plenty of time on  boats… duly noted.”

The boat heeled sharply as we picked up speed. The working jib sheet was fastened with a self-tailing winch, which made our lives much easier in the stronger winds. We went over techniques to avoid painful trimming mistakes after Quincy caught me winding a winch with the line wrapped around my fingers. He made the excellent point that if the sail luffs for a moment during trimming, the world won’t end. It’s much easier and safer to think before you act. This proved to be challenging at times, but practice made the proper motions come more naturally.

We spent the entire afternoon on the water. The weather was a great improvement from the day before, but as we reached the last hour we could feel the sunburn stinging the back of our necks. We sailed up to a bait barge in the mouth of the harbor, a stagnant platform covered in various seabirds that sat between a fair amount of boat traffic and the rows of vessels in their slips. “We’re going to practice docking under sail here,” Quincy said. He walked us through the procedure a couple times and we tacked back and forth to sail up to the platform and come to an abrupt stop. After a few tries he jumped off onto the barge and said, “Now give it a try without me!”

We took turns steering to practice, and it took several tries each to get it right. Stomachs were starting to feel empty and bladders were full. The boys were getting a bit frustrated. The discomfort didn’t bother me; I was on an adrenaline rush each time we circled back to the platform and came in alongside it a little too hot. I was determined to nail this skill, as the idea of sailing up to a busy dock terrifies me. (Have you ever seen that scene in Captain Ron? A highly recommended film for a new sailor like myself.) As we came to a halt, I felt a rush that made me cry out like I was at a football game. Captain Q hopped back on and commended our efforts. “Let’s do it for real now.” 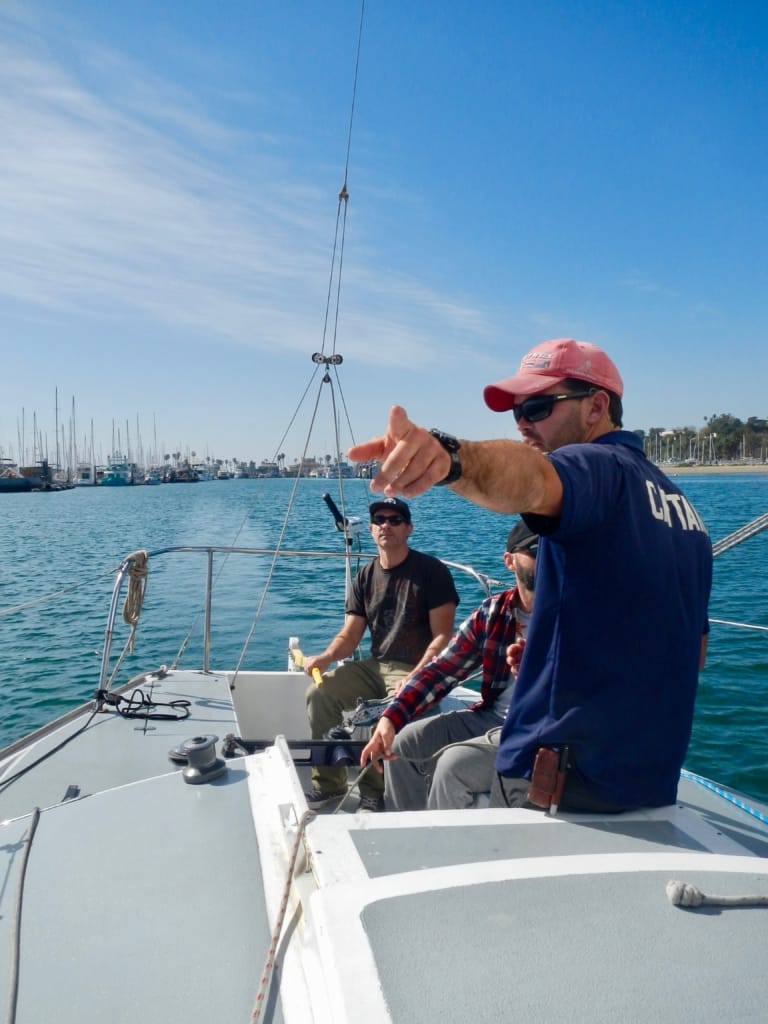 One more practice round before docking under sail.

I paced back and forth the starboard deck with a fender, anxious to prevent damage from a rough landing, but we managed to dock gracefully. In the Santa Barbara Sailing Center office I jotted down some notes from the day in my ASA logbook. Captain Q placed a red “Basic Keelboat” sticker in the 101 slot and said, “Congratulations, you are one step closer to becoming a sailor. Since we had less wind yesterday, I’d like to invite you all back here for more time to practice your skills.” We all chose a date on the calendar, exchanged numbers so we could stay in touch, and headed home to brag to our roommates and families about becoming salty sea dogs in just three short days.