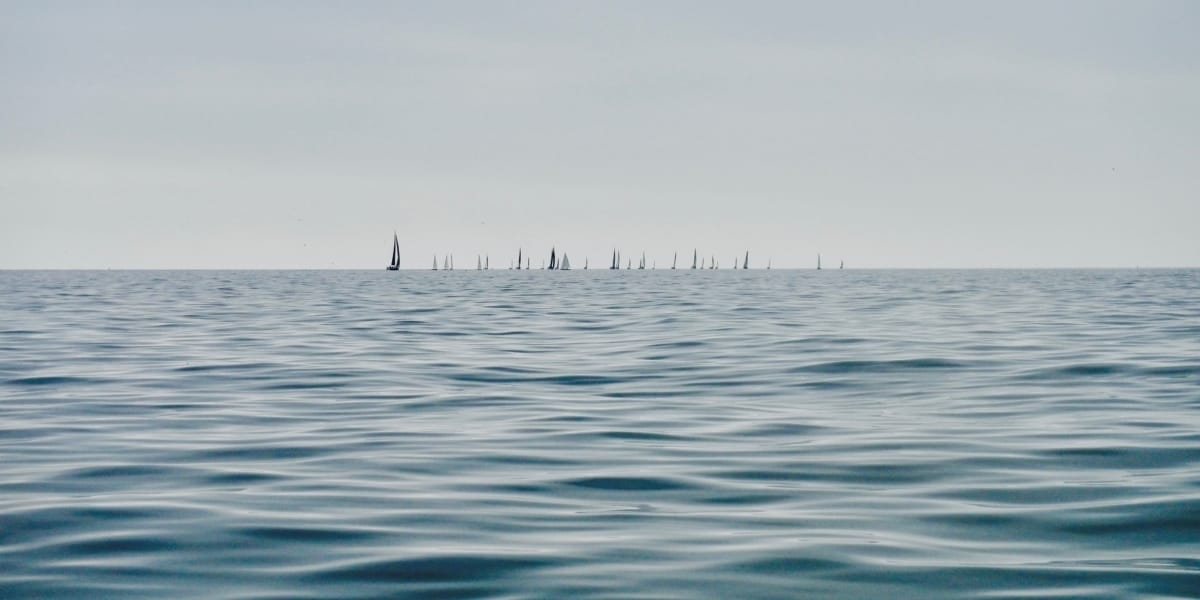 Join Lauren on her adventure as she embarks on a journey to learn to sail with Santa Barbara Sailing. Follow her as she gets her feet wet as a beginner, gains experience, and earns her ASA certifications. The ultimate goal is to complete ASA 104 and go bareboat chartering somewhere exotic.

You’d expect the second day of a three-day sailing course to be the least memorable: you’re not in the excitement of the beginning, nor are you feeling the adrenaline of the solo sail ending. But in a world that relies on something as wavering and powerful as the sea and wind, you never know what kind of day you are going to have.

Santa Barbara, California has about 300 sunny days per year. It gets a rolling fog often in the mornings but it usually burns off around noon. Today as our little sloop emerged from the harbor, we witnessed our city in rare form: the misty clouds formed a film over the mountains and the lower riviera, giving the land a dreamy bluish haze that I had never seen from this offshore perspective. Along each cut layer of the mountains, thicker, billowing tubes of bright white air were trapped along the ridges, spilling over the peaks and cliffs like steam emerging from a pouring pot of coffee. The water was unusually calm as we crawled past the rows of docked boats. I was relieved I wore thick socks and four layers today. “Be prepared” continues to be the most important lesson so far. 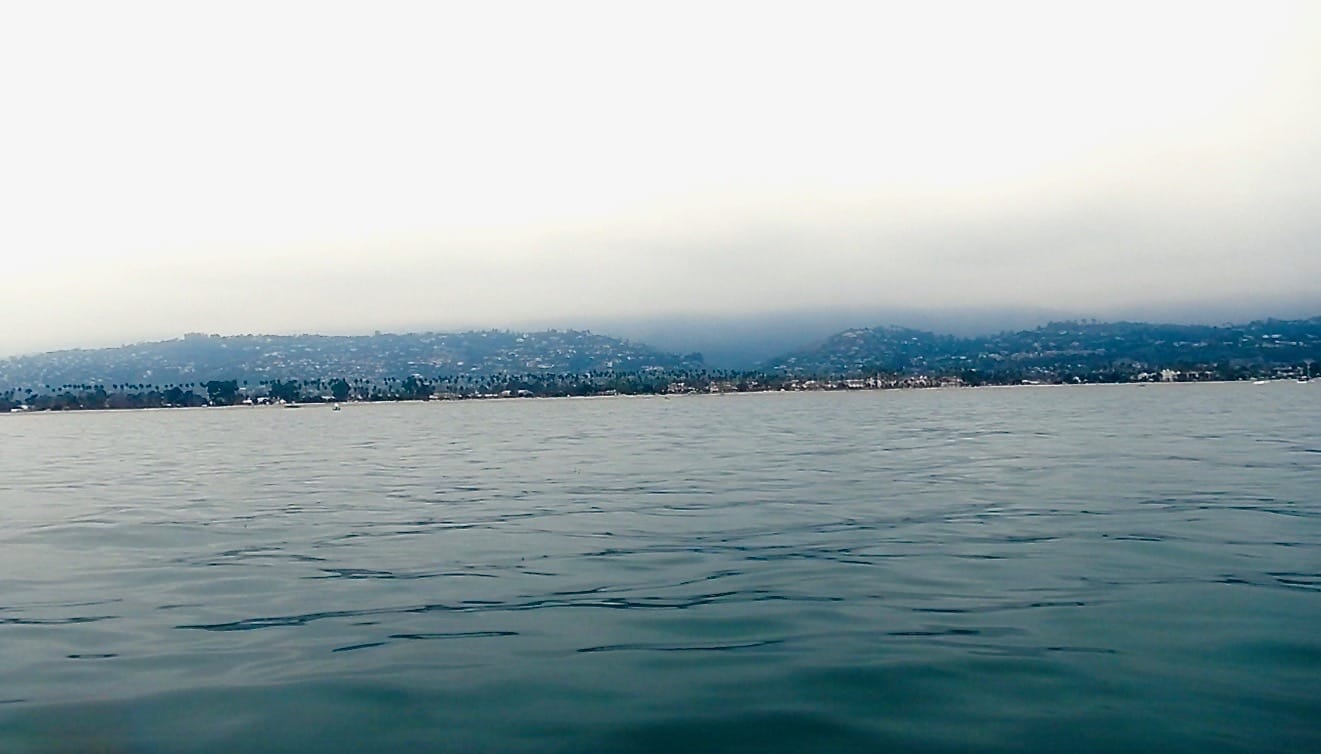 I have never seen this view of my city before.

I sat in the cockpit to steer us along. Getting out of the harbor was surprisingly easy, and as I started connecting the dots between what I had read and what we went over on day one, I felt much more at ease with the sailboat than I expected. Captain Quincy let Travis, Dmitry, and I prepare the boat on our own and the three of us got started with little hesitation. Luckily for us, each line is color-coded: Travis followed a red and white striped line to find the right cleat to raise the halyard and I unfurled the jib, which was rigged with blue. Once you’ve taken a few moments to acquaint yourself, you notice that everything has its specific place, purpose- and a color if you’re lucky.

The wind came in light puffs so it took us a while to get out to open water. As we approached other ships, buoys, and kayakers, Quincy quizzed us on the “rules of the road,” which we had gone over in the classroom that morning. The metaphor he used is perfect: sailing is just like driving a car. There is a set of rules that everyone follows, and once you’ve got them down, it becomes instinctive. At the beginning you may drive in a few circles, or have a couple close calls… but it’s all part of the learning process. Practice makes perfect- or at the very least, improvement.

Once we navigated through the channel and said hello to what was likely the same sea lion on the buoy from the day before, we did some tacking practice. After brushing the dust off once or twice we mastered the maneuver, so we continued with more ease. In the cockpit we told stories like friends around a campfire. We’re all from different parts of the world and have done some traveling, so we joked about how so much can get lost in translation across languages.

“Are sailing terms different in other countries?” Travis asked the captain.

“Nope, they’re almost all the same- at least for any English speaker,” Quincy said. “Sailing is like an international club. Once you’re part of it, everyone helps each other out. The sense of comradery is strong, no matter where in the world you go.” 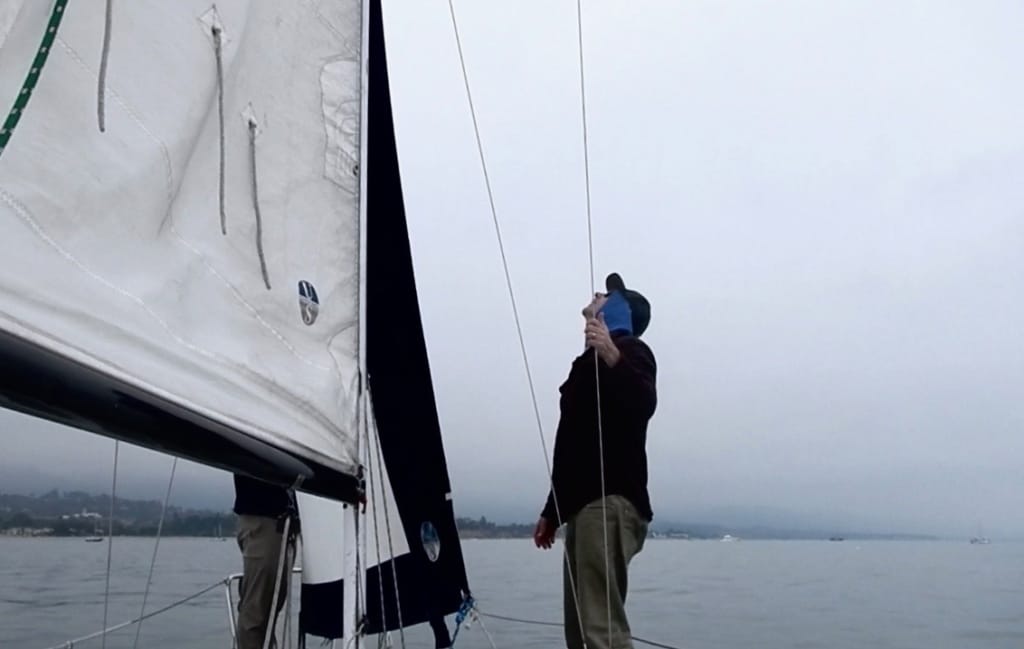 The fireside talk carried us into the afternoon as the wind timidly refused to show itself. We learned the skill of heaving-to to stop for lunch, where you trick the headsail and the rudder to work against one another to hold your direction. Even as we ate Captain Q pointed out more nuances about nearby ships and encouraged our questions.

We tried to stay optimistic about the wind, but it decided not to join us. We headed back with the motor but snatched the breeze at any chance we got. “Do you feel that? Let that mainsheet out!” Quincy got so excited each time a little gust blew past us. I bet all sailors get that same reflex when they feel the wind.

We wrapped up the day with a reminder to study for our test tomorrow. You need 80% to pass and I’m feeling confident in about 60% so far. I’ll be hitting the books and the flashcards tonight. I need to find something to practice knots with too… may I please borrow your shoelace?