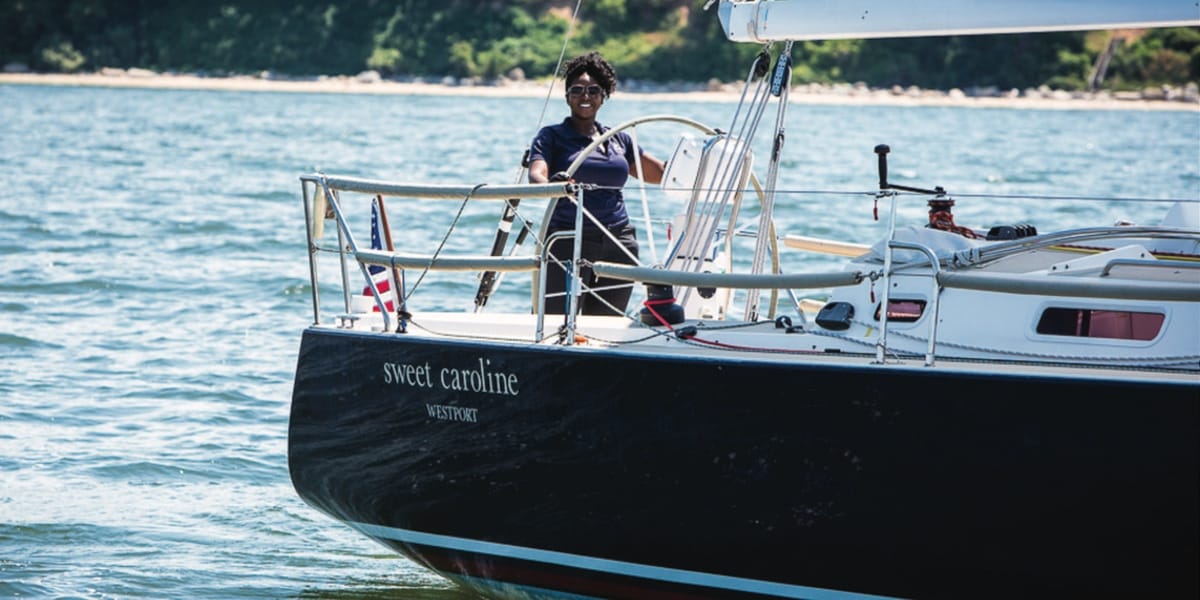 Ayme Sinclair is just an ordinary sailor, but at the same time she is anything but. Like many of us, she races with her team on Wednesday nights, then heads back to the club to have a couple of cocktails and some laughs. Some nights they do pretty well, some nights just okay, but it’s always a good time.

The most distinct difference between Ayme’s team and the rest of the fleet is her crew is made up of sailors of different races and genders while most of the fleet is not. There is no animosity, there’s no bigotry, but this is emblematic of clubs across the country and beyond.

“When I was out competing, I realized there weren’t a lot of people who looked like us,” Sinclair said of her first few races on Oyster Bay Long Island, near her home. “I thought: Why aren’t there more of us out here?”

But irrespective of that and inspired by her new found love of the sport, Ayme dove head first into the world of sailing, enjoying all it had to offer. She took some ASA 101 courses, to become more “useful” and subsequently sailed as much as four days a week. All along, the thought of diversity stayed with her and, at a certain point, she took action.
She created an Instagram account, @Sailingnoire that encourages people to join the sport, and as Ayme puts it: “Do the same thing [as me] and fall in love the way I did.” Her ultimate goals were and are to see a younger, more diverse population within the sailing community.

Sinclair reasons that one of the issues for this lack of diversity is that many communities simply don’t have within them people who know how to do it. It’s a sport that, in many ways, depends on a generational sharing and in these areas, it isn’t on anyone’s radar. In her mind, awareness can change the model.

“That’s when Instagram and Facebook and these social media platforms become super helpful,” Sinclair says. “Because you can reach a big audience and show them what’s going on and kind of shape that conversation.”

In a relatively short amount of time, Ayme was up to 60,000 followers on her account, which brought her quite a bit of attention including a feature story in Essence magazine that spoke of a trip she took to East Africa (Kenya) where she fielded an all female team to race in an area that had never seen such a thing. A television crew caught wind of it and filmed the event for upcoming programming, furthering the message that sailing is not just a sport exclusively for men.

With all this in her wake, Sinclair has since started her own Instagram account (@aymesinclair) focusing on her travel adventures. That account has, at last count, 118,000 followers.

With such a solid presence on social media combined with an infectious spirit and a marketing background, Sinclair recently quit her day job and began her own business called Sinclair Social which specializes in building buzz through social media methods. She credits sailing for her professional happiness and successes.

“It’s given me so much. I started doing it at a time in my life when I was not happy with what I was doing with work—I didn’t feel fulfilled,” Sinclair says. “So, this was my outlet and I was able to use it to help myself find joy. And I know that this [joy] is something everybody experiences, not one gender or one culture. I really do feel that opening sailing up to people of color and more women is a great thing, so they can see how fun it is and how you can build community and develop relationships. I want to see more people experience it and make it so it’s not so one-way anymore.”

Sinclair also made mention of the preconception that sailing is cost prohibitive. She says it’s no secret the image of sailing is one of affluence and it’s true that boat ownership can be pricey, but just getting out sailing is actually more than affordable, very often free.

“It’s not true at all,” Sinclair says of the impression, “Especially when you join a team. As a crewmember all you really have to do is buy some sailing gloves and maybe a 6-pack of beer!”

Today, Ayme continues to sail, have adventures and inspire others to take part. From a fateful invitation to go sailing (and a little ASA training), this optimistic force of nature has turned her life into something satisfying and fulfilling.

“It all came out of the love of sailing. If I had never fallen in love with it and started that account for the team — I wouldn’t be here right now, I’d still be working that 9-5 job.”

So do what Ayme did… Find an ASA sailing school near you. It might change your life!